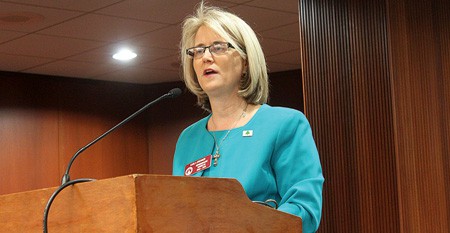 “Now is the time for the state of Georgia to send a clear message that we will not discriminate against any employee in regard to their sexual orientation and gender identity. Everyone deserves to be treated equally, and we should value our diversity,” said Rep. Drenner, the state’s first openly gay legislator, in a prepared statement. “This bill will help us attract and retain the best and the brightest employees, not only from Georgia and across the United States, but from across the world.”

HB 323 has 77 co-sponsors, including 17 Republicans and 1 Independent. Drenner says the bill does not address private employment in Georgia, which would have little to no chance of passing in the Republican-controlled legislature, but does affect state colleges and universities.

Fifty-eight cities and counties in Georgia already have similar protections in place and HB 323 would expand that coverage statewide. And the bill, which has failed passage in recent years, has a powerful ally in Willard, who is chairman of the House Judiciary Committee.

Jamie Ensley, newly named national chairman of the Log Cabin Republicans, wrote a letter to Rep. Drenner and Rep. Willard showing support for the move, saying, “Thank you for your leadership and efforts to build bi-partisan support for nondiscrimination protections for the State of Georgia employees on the basis of sexual orientation and gender identity.”

View the full text of the bill below.