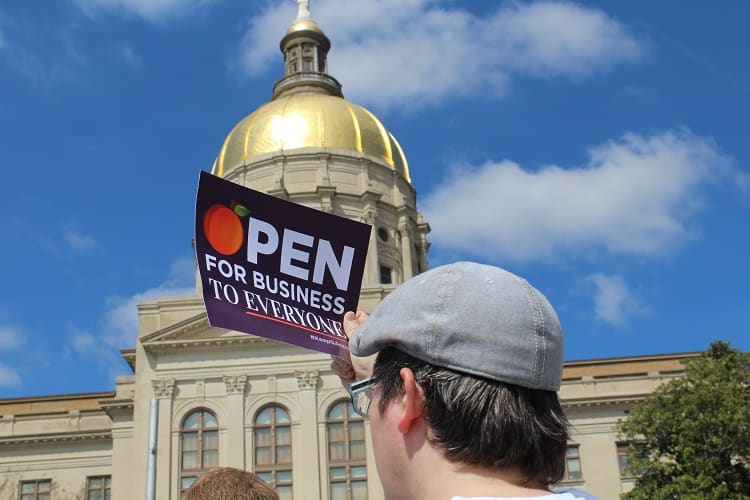 It’s no secret that corporations and business groups have been showing more visible support for the LGBT community in recent years.

At no time was this support more apparent than during last year’s legislative session in Georgia, when state Sen. Josh McKoon (R-Columbus) and state Rep. Sam Teasley (R-Marietta) each proposed so-called “religious freedom” bills. Georgia-based corporations came out forcefully in support of the LGBT community, issuing individual statements with direct references to such legislation. It’s that kind of support, along with a massive effort by LGBT rights groups and allies, that led to both bills’ failure.

But this year, over two months into the legislative session and just days away from the possible passage of SB 129, McKoon’s 2015 “religious freedom” bill, progressive and LGBT rights groups are fed up and have begun publicly calling out corporations for their efforts, or lack thereof.

Placement of ‘discrimination’ line in bill makes it ’empty gesture’

When SB 129 passed in the Senate on March 5, state Sen. Bill Cowsert (R-Athens) worked with McKoon to insert the following line into the bill: “Courts have consistently held that government has a fundamental, overriding interest in eradicating discrimination.”

When contacted for their stances on SB 129, AT&T, Home Depot and Delta Air Lines all stated that they are aligned with the Georgia Chamber of Commerce and the Metro Atlanta Chamber of Commerce, who issued a joint statement referencing Cowsert’s attempt to insert that line about discrimination into the bill:

“We are encouraged by Senator Cowsert’s leadership and support his efforts, as well as other members of Senate leadership, to amend the bill to make clear that government has a fundamental, overriding interest in eradicating discrimination,” the chambers say. “We will continue to work constructively with stakeholders to address lingering concerns over the potential implications of this legislation as it works its way through the process.”

But LGBT rights groups and legal scholars say the placement of that line in the legislative findings portion of the bill—instead of in the statutory portion where it would have more teeth—means it will do nothing to protect the community.

“While I can appreciate that Sen. Cowsert’s acknowledgment that the fear of discrimination is real, unless the current bill is amended to specifically prohibit it, the words are only a gesture,” Graham says. “AT&T, as well as the members of both chambers, know this, and it is unfortunate that they continue to refuse to take action to support Georgia’s LGBT community. AT&T, along with other corporations and business groups around the country, have been vocal in their opposition to similar legislation. They need to be held accountable and explain why they won’t do the same for their customers and employees in Georgia.”

Delta’s $23 million slap on the wrist

Further complicating matters is a March 5 report from the Atlanta Journal-Constitution that suggested Delta’s lowered profile on the matter this year may have something to do with a Republican state representative’s slap on the wrist—a $23 million slap on the wrist.

Inside the $1 billion transportation bill that’s receiving the majority of the attention this session is a new provision that would end a 10-year-old tax break on aviation fuel, which the AJC estimates would cost $23 million a year at today’s oil prices, and which Delta would bear the brunt of.

“He’s a private citizen. He’s welcome to chime in on anything,” Ehrhart tells Jim Galloway of the AJC’s Political Insider. “[The religious liberty bills] didn’t drive me. But will I more than happily take advantage of those who are tired of him chiming in to pass a piece of legislation? Absolutely.”

Katherine Grainger, a civil rights attorney who served as assistant counsel to New York Gov. Andrew Cuomo and crafted and implemented the state’s Marriage Equality Act, was shocked when she heard about the open anger conservative lawmakers are expressing toward Delta.

Delta declined to comment on the report and would only say it aligns with the chambers on their statement on SB 129.

When Coca-Cola issued its statement on “religious freedom” bills last February, it did so strongly, repeatedly referencing the legislation that was at the center of so many battles in so many states.

“Recently, legislation in some states in the United States was proposed that we believe is discriminatory against gay, lesbian, bisexual, and transgender (LGBT) people and others,” the statement read. It further says, “We believe legislation that would allow a business to refuse service to an individual based on LGBT, or any other, status not only violates our Company’s core values, but would negatively affect our consumers, customers, suppliers, bottling partners and Associates.”

But when asked for their stance on SB 129 this year, they pointed the Georgia Voice to the company’s new “Statement on Diversity.” Gone are any references to “legislation” and in its place is the word “policies”—a very important distinction, says Bryan Long, executive director of progressive political organization Better Georgia.

“It’s their silence on that direct question [their stance on SB 129] that is most important,” he continues. “No one doubts that Coca-Cola has strong non-discrimination policies. In fact, their policies are among the best in the nation. But this debate is about a discrimination law that could be passed as a result of their silence.”

UPS and InterContinental Hotels Group (whose brands include Crowne Plaza, Holiday Inn and Hotel Indigo) did not respond to requests for comment on their stances on the legislation, and no corporations would address SB 129 specifically.