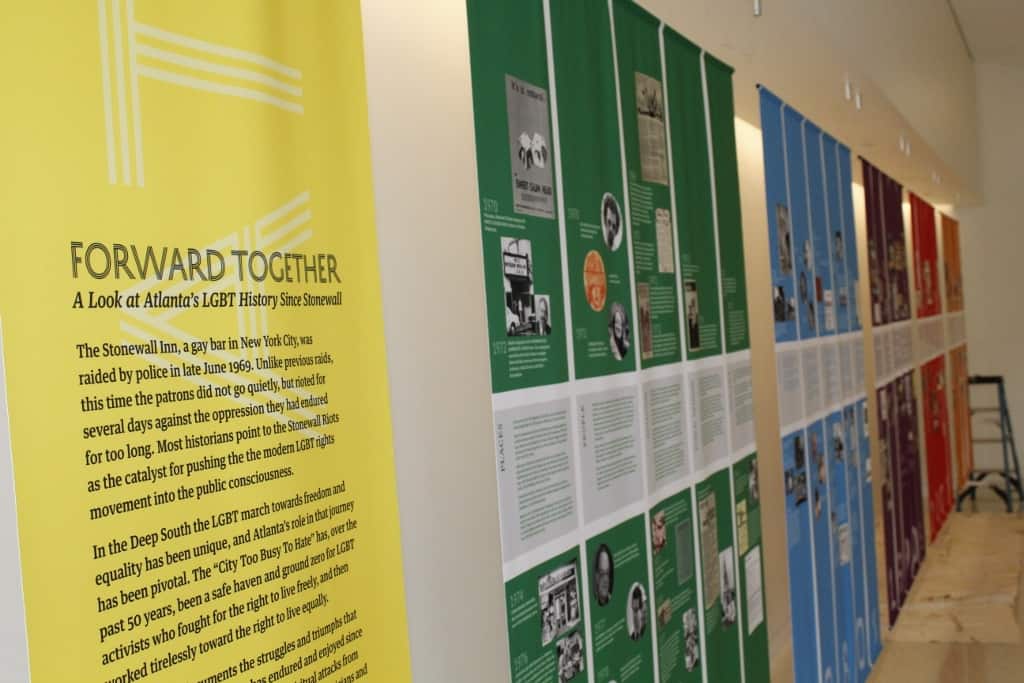 The National Center for Civil and Human Rights in downtown Atlanta unveils an exhibit Thursday documenting the struggles and triumphs of Atlanta's LGBT community. The launch doubles as the official opening of the LGBT Institute, an international LGBT organization housed in the Center that will also include an educational component and, eventually, an annual awards gala.

The exhibit, titled "Forward Together: A Look at Atlanta's LGBT History Since Stonewall," will run through the end of the year.

The exhibit is the culmination of a months-long process that began by pulling together a curatorial team drawn from across Atlanta's LGBT community, including:

Activists from the Georgia LGBTQ Archives Project started working on a timeline first. Luckily, Archives Project member Cal Gough had done an LGBT Atlanta history timeline for Kennesaw State University's website, so they used that as a jumping-off point and added as they went along.

Archivists from the Archives Project began pulling together materials for the exhibit, of which about 80 percent came from Georgia State University and the rest from Spelman College, the Atlanta History Center and Kennesaw State University, according to Gerrard. Then all the images had to be rescanned to a higher resolution suitable for display.

"It was a massive chore," Gerrard said. "I think I gave [the Center’s Director of Exhibitions and Design] David Mandel almost 500 objects."

They also pulled together excerpts from 20 oral histories, but there wasn't room for them in the exhibit. Gerrard says they hope to be able to use them if there is an online version of the exhibit.

Hayward was tasked with creating a narrative tying together the major moments in Atlanta LGBT history across five decades.

"We divided the narrative into Activism, Public Opinion and the Law, Civic Events, People, and Places," Hayward told Georgia Voice. "Thus the exhibit is about landmarks in our long march to freedom, rather than about the growth of our various communities, so I'm hoping that the women's community and trans community and people of color are covered in more depth in subsequent presentations. Of course all our communities are represented in this exhibit, albeit not thoroughly."

Gerrard echoes Hayward's comments regarding putting more of an emphasis on the transgender community and people of color in the future, saying that there just aren't enough archival materials available from those communities.

"We want to do the history justice, but we don't have the collections that completely cover everything," she said. "My hope is that at the end of the day, this exhibit will encourage people to donate their materials so that archives around the state will get more and more materials."

Next steps for the LGBT Institute

Both Roemerman and Gerrard were eager to mention that this is just the first of many LGBT initiatives the Institute plans on tackling.

"In terms of the exhibit, I think this is a jumping-off point. We have to see it as a history of LGBT Atlanta, it's not the history," Gerrard said.

The Institute's programming board, of which Rink and Gerrard are members, met in late August and walked out the door with a plan to address the improvements needed with three systems: criminal justice and safety, education and employment, and public health and wellness.

"These systems affect our everyday lives, and LGBT people are often at a disadvantage when it comes to access and protection," Roemerman said.

The Institute will hold its first public event on November 2 at the Center. They will explore these systems and develop strategies on how to improve them. More details will emerge as the event approaches.

"I foresee a lot of activities that will help bring about change," Gerrard said of the Institute's future. "It's not just like, 'Well, let's talk about stuff.' We're really hoping that peoples' lives will improve and that awareness will be increased and substantive results will come out of the work that we're doing."