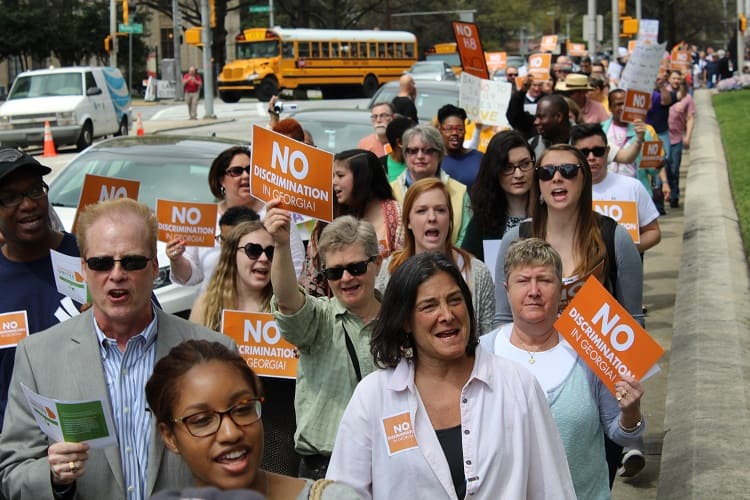 “The Religious Freedom Restoration Act (RFRA) is wholly inconsistent with the City of Atlanta’s non-discrimination policy and our values of acceptance and inclusion. The bill seeks to reverse the progress we have made as a city, and nation, to protect the civil rights of all Americans including lesbian, gay, bisexual and transgender individuals.

My Administration will make every effort to prevent this bill from passing and we remain committed to making Atlanta a more welcoming city for all her citizens – regardless of their sexual orientation, gender, race and/or religious beliefs.”

With just days left in the legislative session and the fate of state Sen. Josh McKoon’s (R-Columbus) so-called “religious bill” hanging in the balance, roughly 150 opponents of the bill gathered for a rally at the Georgia State Capitol. 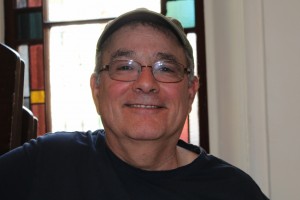 The March 31 rally started at Central Presbyterian Church and then continued in a march around the Capitol. It was organized by Georgia Unites Against Discrimination, the LGBT rights coalition group consisting of Georgia Equality and the Human Rights Campaign.

“Not in my name! Not in our name! Not in God’s name!” marchers shouted as they made their way from the church to the Capitol.

“I think the whole pretext of religious freedom is balony,” said Greg Ames, 66, of Marietta (left). “This is a means of stepping in front of the Supreme Court’s probable ruling on gay marriage. This is an effort to support bigots in Georgia to allow them to continue to fight gay marriage in spite of an anticipated Supreme Court ruling.”

The rally occurred as McKoon’s back appears to be against the wall, but as Georgia’s political veterans will tell you, nothing is ever over until sine die, which is scheduled to occur at 12 a.m. Friday morning. 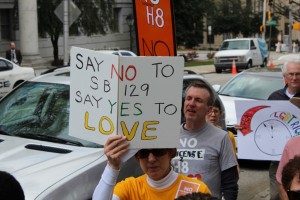 There have been a series of twists and turns for the bill throughout the session, but none more so than in the last couple of weeks. The bill passed out of a special House subcommittee after a March 25 hearing and was just one step away from a vote on the House floor, until some last minute dramatics occurred in a two-hour long meeting of the House Judiciary Committee the following day.

But the bill got a breath of life in it when a March 30 hearing was scheduled before the Judiciary committee. Then on the eve of that hearing, it was canceled without comment from committee chairman Rep. Wendell Willard (R-Sandy Springs). It is believed that the Republicans who voted in favor of the anti-discrimination amendment refused to change their vote, and the nationwide uproar over passage of a similar bill in Indiana surely contributed to the hearing’s cancellation.

So while opponents of the bill have the momentum and proponents don’t have time on their side, it’s not over yet. Opponents fear the whispers that the bill could be attached to the transportation bill in the final days and sneak into law.