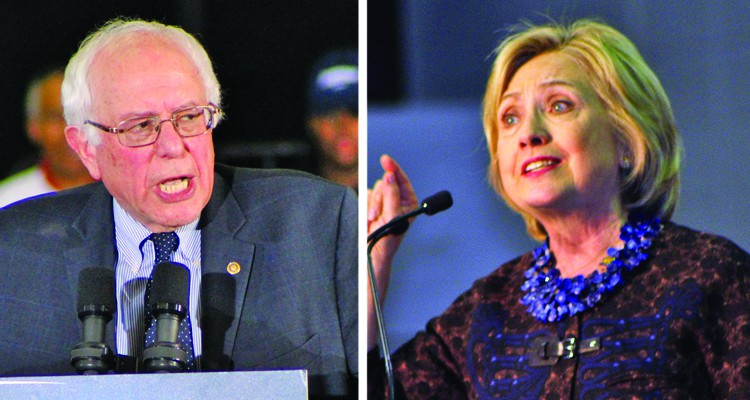 Early voting is well underway in Georgia’s presidential primary, and based on interviews conducted with community leaders, activists and various political players, as well as a Georgia Voice reader poll, the state’s LGBT community appears to be leaning towards former Secretary of State Hillary Clinton for the March 1 contest.

In a poll of nearly 700 Georgia Voice readers, Clinton notched 54 percent of the vote, with Vermont Sen. Bernie Sanders getting 40.5 percent and 5.5 percent saying they would be voting for one of the remaining Republican candidates.

The vast majority of those we interviewed sided with Clinton, with many claiming she is stronger on LGBT rights, but a closer look reveals both candidates have been creative with how they’ve framed their historical support of the community.

The first thing a Bernie Sanders supporter will tell you if asked to compare the senator’s LGBT rights record to Secretary Clinton’s is that Sanders voted against Don’t Ask, Don’t Tell (DADT) in 1993 and against the Defense of Marriage Act (DOMA) in 1996 as a congressman, while President Bill Clinton signed both into law with his wife’s public support at the time.

Clinton claimed in an interview with MSNBC’s Rachel Maddow last October that her husband signing DOMA into law was a “defensive action” meant to prevent passage of a constitutional amendment banning same-sex marriage. Sanders claimed Clinton was “trying to rewrite history” on the matter, and her claim drew criticism from longtime LGBT and political activists like Michelangelo Signorile and David Mixner. Even Hilary Rosen, a lesbian longtime political activist and Clinton supporter, voiced her displeasure at the claim, tweeting, “@BernieSanders is right. Note to my friends Bill and #Hillary: Pls stop saying DOMA was to prevent something worse. It wasn’t, I was there.”

After that though, things get a little tricky.

Despite his votes against the two anti-LGBT laws, Sanders has remained silent on marriage equality for much of his career, explaining for years after those two votes that they were based more on constitutional grounds and government overreach.

Both candidates evolved on marriage equality, as President Barack Obama and many others have over time, with Sanders coming out publicly for it in 2009 and Clinton following him four years later, a few months after she left the State department. But Clinton struggled with the topic in an interview with NPR’s Terry Gross in 2014, and didn’t say it was a constitutional right until April 2015.

One event that has stuck in the minds of numerous LGBT supporters of Secretary Clinton who we spoke to is a speech she gave before the United Nations in Geneva on International Human Rights Day in 2011. She devoted the entire 30-minute speech to LGBT rights, with the line, “Gay rights are human rights, and human rights are gay rights,” leaving an indelible mark considering the audience and the time.

“Hillary Clinton is the only candidate who understands that if we are going to dismantle inequality, we need to tackle it head on,” Clinton’s Director of LGBT Outreach Dominic Powell tells Georgia Voice. “Her comprehensive plan to pass the Equality Act, promote LGBT-inclusive schools and family policies, and champion transgender equality proves that she’s putting the LGBT community front and center, instead of shying away from addressing the key issues that matter.”

Sanders is also in favor of adding LGBT people to the 1964 Civil Rights Act via The Equality Act, advancing anti-bullying policies in schools, and working on police department interactions with transgender people—especially transgender women of color.

Glen Paul Freedman, chair of the board of directors of Georgia Equality, is one Clinton supporter who, judging by his social media activity, perpetually seems just a few more #I’mWithHer hashtags away from winning a free toaster.

He cites that 2011 speech before the United Nations when asked about her support of LGBT issues, saying, “She didn’t have to do that, she wasn’t forced to do that, she was the only person who did it and she had the support of the president. I think that’s a telling moment and it shouldn’t be swept under the rug,” adding that he thinks Clinton has been more outspoken than Sanders about LGBT issues over the years.

A number of other local LGBT leaders, activists and political players appear to agree with Freedman, with the following confirming their support for Clinton:

Lesbian state Rep. Keisha Waites (D-Atlanta) declined to specify which candidate she is backing, but her name was on a list the Clinton campaign released Feb. 18 of African-American  state legislators in Georgia who are supporters.

None of the Georgia LGBT community members we spoke to voiced support for Senator Sanders, and the Sanders campaign could not provide a list of prominent Georgia LGBT supporters.

Still lonely out there for gay Republicans

A poll by Community Marketing & Insights (CMI) released Feb. 15 appears to show LGBT voters slightly favoring Clinton over Sanders on the national level as well. The CMI poll of 563 LGBT citizens who plan to vote in the 2016 presidential elections showed Secretary Clinton getting 48 percent of the vote, Sen. Sanders getting 41 percent and the six remaining Republican candidates each getting less than 2 percent each.

When asked which of the Democratic party presidential candidates would be “the most supportive of LGBT civil rights,” the results were evenly split between Clinton and Sanders. When asked the same question about the Republican party presidential candidates, a whopping 73 percent indicated that none of them are supportive of LGBT civil rights, while 6 percent selected Ohio Gov. John Kasich, 4 percent selected Donald Trump and the remaining candidates received 2 percent or less.

Couple that with the Georgia Voice poll showing less than 6 percent of readers planning to vote Republican in the primary and a familiar picture emerges—it’s still lonely out there for gay Republicans. It’s not a surprising finding seeing as how several of the candidates—Texas Sen. Ted Cruz and Florida Sen. Marco Rubio in particular—are publicly embracing numerous anti-LGBT views in order to capture the evangelical vote.

Atlanta’s Jamie Ensley, national board chair for the Log Cabin Republicans, tells Georgia Voice that while the organization doesn’t make endorsements in federal or presidential primaries, he personally plans on supporting Trump.

“I’m personally supporting Trump over the rest of the Republican candidates  because he has a backbone that America needs to fight the evil growing around the world,” Ensley said. “He’s also a successful and experienced businessman and not a career politician who will run America like a business. I also believe Trump is the best candidate to insure America remains the strongest country on the face of the earth.”

And Allen Fox of Georgia Republicans for the Future said his group also doesn’t endorse presidential candidates and that he had yet to make a decision on who he supports personally.