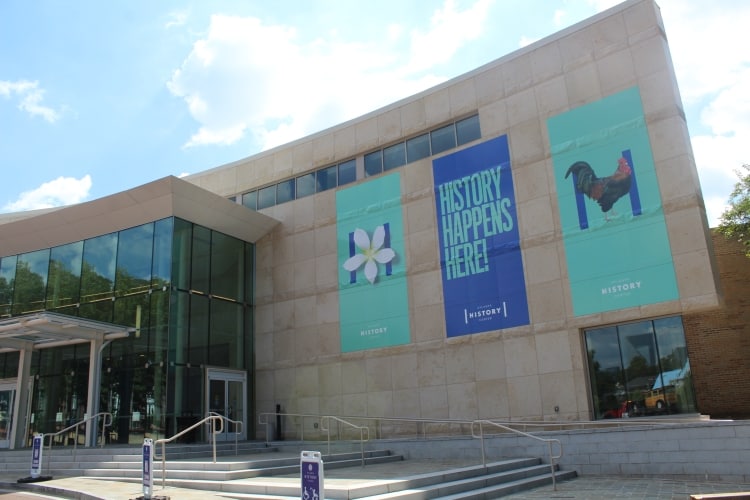 When the Atlanta History Center was putting together their new signature exhibit, called Gatheround: Stories of Atlanta, they knew they had a lot of tools at their disposal. It would be located in a greatly expanded, 7,700 square-foot space just off the Center’s newly expanded lobby, and it would be the only exhibit that opens up to the lobby.

It was replacing an exhibit that had been there for over 20 years, with the intention of Gatheround being there as long or more. But unlike that previous exhibit, Gatheround was designed so that pieces and themes can change over the years, opening it up to a world of possibilities. And change was exactly the reason the Center decided it was time for a new exhibit. The explosive post-Olympics growth of the city needed to be reflected at the Center, organizers say, and they stocked it with 750 artifacts, documents, photographs, and books to help prove it.

But they also wanted to be inclusive of all of the voices throughout the city’s history, including those who had been silent of their own volition, or had been silenced by others. And that meant a more significant role for the city’s LGBT community, especially considering all of the changes the community has been through since the early 1990s.

“The history of Atlanta is simply not complete as a narrative of the most powerful and dominant voices,” said Atlanta History Center staff historian and “Gatheround” curator Calinda Lee. “LGBTQ people have helped to define this city — and well before there was even a ‘movement’ to speak of. We feature members of the LGBTQ community throughout the exhibition because it’s our intention to affirm that we are all a part of this community together and we need not relegate LGBTQ community members to discussions of LGBTQ-focused issues.”

If you make your way through the cavernous and pristine Atlanta History Center lobby and pass through the entryway into Gatheround, you’re greeted by a huge rectangular high-definition screen showing an orientation film. The first voice to greet you? That of gay Atlanta promoter (and Georgia Voice columnist) Bill Kaelin, who speaks about the importance of history for everyone, his Midtown neighborhood and the role the LGBT community has played in that area. Images of Atlanta Pride marches going back over 30 years follow.

As you make your way farther through the exhibit, you notice that it’s not set up in your typical chronological approach. Instead, Gatheround is divided into four thematic zones: Family & Community, Politics & Justice, Urban Growth and Cultural Life.

LGBT Atlantans are most heavily represented in the Family & Community zone where, in a towering display called “What is Family” hangs the first NAMES Project AIDS Memorial Quilt panel. A description goes into detail about the effect the AIDS crisis had (and continues to have on the city), and how the city responded. Meanwhile, audio and video excerpts from StoryCorps interviews with same-sex Atlanta couples are played on a continuous loop.

A couple more turns and you’re in front of a bank of video monitors, where you can choose the story you want to explore. The stories of LGBT Atlantans are embedded throughout the display, and the speakers aren’t often labeled as LGBT on the screen, so visitors sometimes don’t know they’re about to hear that story until they view it—an intentional move to expose different communities to each other’s stories and give more insight into the Atlantans that some might not know much about.

Before exiting the exhibit, visitors are encouraged to step into one of two video recording booths and share their stories. Visitors can share what’s important to them about Atlanta’s history (LGBT or otherwise), reflect on their Atlanta memories and give feed back about what they would like to see during a future visit.