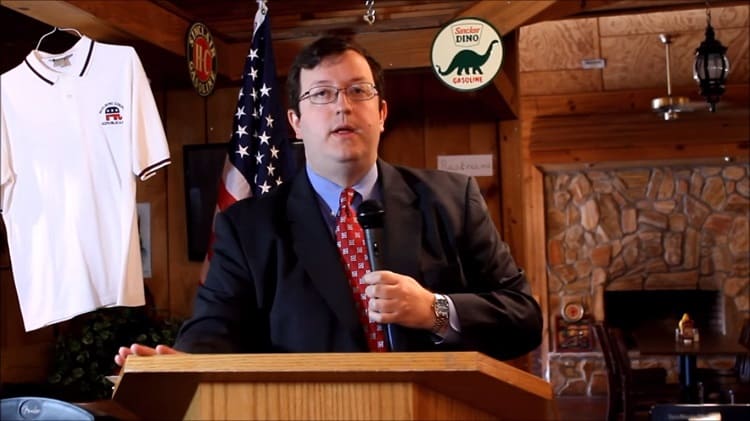 In a recently unearthed video, state Sen. Josh McKoon (R-Columbus), author of a so-called “religious freedom” bill that has failed in the state legislature for two years running, blamed the “liberal, far-left cultural norms” of multinational corporations headquartered in Georgia for the bill's troubles, and downplayed the role of LGBT and progressive groups.

“The Georgia Equalities of the world and Better Georgia – they don’t get a whole lot done at the Legislature. So why is it that we’ve had this problem?” McKoon asks in the video of an Aug. 15 Paulding County GOP gathering posted on Aug. 22.

“We’ve had this problem because very large multi-national corporations that are headquartered in this state – their executives, many of whom are not from Georgia, have different values than you and I do,” he continues. “They think that their cultural norms, their liberal, far-left cultural norms, should be applied to our state. They think that they ought to be able to use the awesome power of government to do that. And that is why we have had the problem that we’ve had.

“…When you start telling me that our individual civil liberties are somehow a business issue, we’re going to have a serious problem.”

Georgia Equality is the statewide LGBT advocacy group that has been a steady presence in the fight against the bill, organizing rallies, hiring former Georgia Attorney General Mike Bowers to weigh in and testifying at hearings on the bill down at the Capitol. Better Georgia is the progressive group led by the openly gay Bryan Long that's also been a fierce critic of the bill—in fact, it wouldn't be a day ending in “y” if McKoon or the group weren't calling each other out on Twitter.

We've reached out to Georgia Equality for comment and will update as soon as we hear back. See the video for yourself below. McKoon has vowed to introduce the bill again in the upcoming session in January. (h/t AJC)

UPDATE 11:27 a.m.: We spoke with Amanda Hill-Attkisson, deputy director of Georgia Equality who had the following to say in response to McKoon's comments.

“McKoon has been unable to pass his bill because it opens the door as a license to discriminate. Local Georgia businesses and multinational corporations are smart enough to know that to attract the best talent and strongest workforce that discrimination in any form is unacceptable. And because Georgia doesn't have any nondiscrimination laws in place, that makes this bill even more problematic.

"Obviously, we work extremely hard to make sure that LGBT communities are protected and we'll continue to work down at the legislature to make sure bad policies are not passed.”