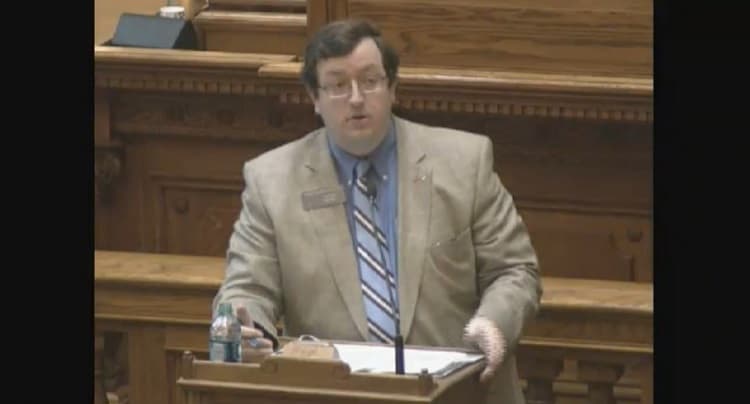 SB 129, state Sen. Josh McKoon’s (R-Columbus) controversial so-called “religious freedom” act, passed in the Georgia Senate today and will move over to the House for the next test. The bill passed by a vote of 37 to 15.

It’s another big step forward for McKoon’s bill following the passage of the bill out of the Senate Judiciary Committee on Monday, a committee in which he is the chair. With business groups and corporations mostly staying quiet this year on the bill, as opposed to their vocal criticism last year, McKoon had the wind at his back, despite the high profile entrance of former Georgia Attorney General Mike Bowers into the conversation.

Dubose Porter, chair of the state Democratic Party, released a statement immediately following the vote, saying, “Today’s actions by Senate Republicans are truly disappointing. We are living in the year 2015 and so much progress has been made across the nation, yet a few politicians in Georgia want to turn back the clock on civil rights in the name of religious freedom. Religious beliefs and equal rights for all Georgians can exist in symmetry without government intrusion. This bill is unnecessary and I urge members of the State House to reject such a dangerous piece of legislation that will set Georgia back for decades.”

Sen. Curt Thompson (D-Tucker) heavily criticized how McKoon handled the process, referencing how he scheduled a committee meeting on the bill two days after introducing it and called a vote in a subsequent committee meeting while all the Democrats on the committee were out of the room.

“The reality was there was no real amendment process and no real substantive testimony process,” he said from the Senate floor. “That’s not the way to pass a bill. that’s not a way to run a committee and run a process.”

He also objected to the substance of the bill, calling it unnecessary and making the claim that many have echoed, that the bill and others like it are just a response to the legalization of same-sex marriage in states across the country. “There’s no way anyone’s going to convince me that that’s not what’s happening now,” he said.

Referencing the drama in Alabama, and yesterday’s move by the state’s Supreme Court to halt issuing marriage licenses to same-sex marriage couples, Thompson conveyed his fears that the bill could lead to the same thing happening in Georgia once same-sex marriage is legalized.

“We don’t want to be the next Alabama and be the next circus that they are becoming,” he said.

Sen. Nan Orrock (D-Atlanta) placed a letter on her colleagues’ desk at one point listing her concerns over the bill, including that it could lead to costly lawsuits, that it was unnecessary thanks to the First Amendment of the U.S. Constitution, and that it could legalize discrimination.

“Wow, we’ve heard a lot of about that,” McKoon said of the discrimination accusation. He then went on to claim that no such cases were reported in other states with similar legislation.

Sen. Elena Parent (D-Atlanta) also spoke out against the bill, saying that it is unnecessary and was a response by those opposed to same-sex marriage, referencing that 35 such bills have been introduced across the country in the last 18 months.

“That’s really where the heart of this debate comes,” Parent said.

Earlier in the day, the Senate voted to engross the bill, i.e. make it so that there are no amendments made to the bill. Parent had been trying to include an amendment that would define the word “person” in the legislation.

Sen. Vincent Fort (D-Atlanta), who was briefly out of the room while the bill was passed in the Senate Judiciary Committee on Monday, spoke out against engrossment today. He later spoke out against the bill on the Senate floor in the afternoon session, saying the bill, “creates a vehicle for people to cloak discrimination and perhaps even criminal activity under the guise of religious freedom.”

“This bill would gut what few protections LGBT persons have in this state,” he continued, saying it would allow property owners to refuse housing to LGBT tenants and that it would allow court clerks to deny issuing marriage licenses to same-sex couples.

UPDATE: The Human Rights Campaign and Georgia Equality weighed in with their reaction to the bill’s passage in the Senate. The two groups are involved in joint project called Georgians United Against Discrimination.

“This bill is a reprehensible attack on LGBT people and their families in Georgia,” said HRC National Field Director Marty Rouse in a press release. “It does not address any legitimate problem with current law and creates harmful consequences for businesses throughout the state. It threatens not just the LGBT community, but women, members of minority faiths and other minority classes. All Georgians deserve to be treated with dignity and respect, and we need all fair-minded people in the state to help stop this bill.”

“It’s disappointing that the Senate voted today for such a decisive and unneeded piece of legislation,” said Georgia Equality Executive Director Jeff Graham. “Legal experts from across the political spectrum agree that this bill could open the door for discrimination. And if this is not about creating a license to discriminate, why would they work so hard to prevent language that would clarify that from being added to the bill. The actions today will have a chilling effect on Georgia’s reputation and sends a message of intolerance to the next generation.”