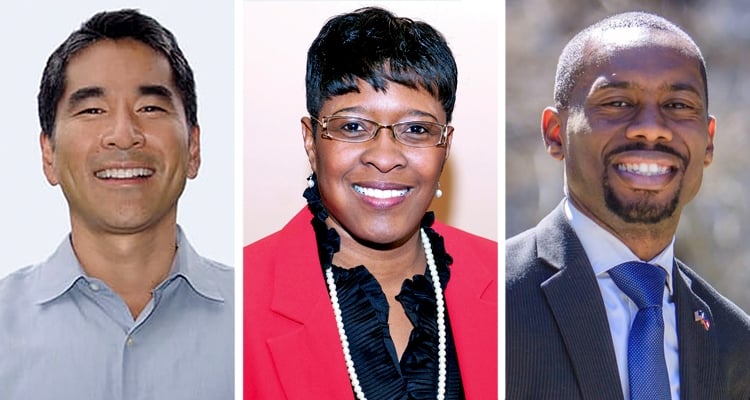 While everyone’s eyes are on the Atlanta mayoral race, there are still a good number of other important races that also went to a runoff — and still a good chance for major LGBT representation on the local and state level.

Nearly 30 metro Atlanta races went to a runoff. Here’s a snapshot on four of them.

Atlanta City Councilmembers Alex Wan and Felicia Moore made it to the runoff over fellow City Councilmember C.T. Martin in the race for City Council president. But Wan — who was elected in 2009 and became the first Asian-American member and the first openly gay man on the Council — was the candidate who got the vital backing of Martin, who garnered a strong 26 percent of the Nov. 8 vote.

“I know Alex Wan to be an honest, fair collaborator who can bring people together across geography and ideologies to get real work done for Atlantans,” Martin said in a press release. “Disagreements are natural in developing policy, and he and I have had our disagreements, but unlike Ms. Moore, Alex was always respectful, so we could work toward solutions on other issues at other times.”

Wan said that the Martin endorsement is noteworthy because Martin has a longer history working with Moore, and that he and Martin represent directly geographic opposite districts in the City.

“Our mutual desire to move Atlanta forward and find collaborative solutions unites us,” he said.

Many LGBT voters haven’t forgotten about Wan’s attempts to rezone Cheshire Bridge Road in his first term, which would have put adult stores at risk if successful. Related or not, the candidate looked to shore up his LGBT support with a Nov. 27 campaign rally at the intersection of 10th Street and Piedmont Avenue — considered by many to be the city’s LGBT ground zero.

As for LGBT groups, Wan received the endorsements of Georgia Equality, Georgia Stonewall Democrats, the Human Rights Campaign and the Victory Fund, while Moore got the Georgia Log Cabin Republicans’ endorsement.

Pitts garnered 38 percent of the vote to Waites’ 34 percent on Nov. 8, with Sandy Springs City Councilmember Gabriel Sterling missing out on the runoff with 28 percent. Sterling, a Republican, said he is considering whether to endorse one of the two Democrats.

Waites or Pitts would take over for former Chair John Eaves, an LGBT ally who resigned the seat to make an ultimately unsuccessful run for Atlanta mayor. It’s unclear at this point if Eaves will endorse either of the two.

Openly gay civic activist De’Andre Pickett made it to the runoff to replace Waites in state House District 60. Pickett received the endorsements of Georgia Equality and Georgia Stonewall Democrats and faces Kim Schofield on Dec. 5.

State Senate District 6 will flip from red to blue next month thanks to a runoff featuring two Democratic candidates, but it’s the inclusion of one of those candidates that is making this race stand out even more. Jaha Howard, the Vinings dentist whose anti-LGBT, misogynistic Facebook posts were uncovered last month, will face attorney Jen Jordan.

Georgia Voice broke the story uncovering Howard’s Facebook posts made from 2011 to 2014, in which he said that he believes that “women should only teach other women” and wonders if there is a “a homosexual agenda in public education” and if the Girl Scouts “are being used to push a [sic] pro-abortion and pro-homosexuality positions.” The discovery of the posts led to Howard’s campaign manager resigning and a queer state representative to refute claims of an endorsement.

Howard apologized on his Facebook page several hours after the original story was posted, but in a follow-up dialogue with people in the comments section, he doubled down on some of the views, confirming that he believes being gay is a sin, that he doesn’t know whether being gay is a choice and that women shouldn’t be in the ministry. He refused calls for him to drop out of the race.

The seat, which includes parts of Buckhead and Sandy Springs, has long been in Republican control and was left vacant when Hunter Hill resigned to run for Georgia governor. Howard came within four points of beating Hill last year.

The following is a list of all of the runoffs taking place in metro Atlanta on Dec. 5, with (when applicable) endorsements from LGBT groups Georgia Equality (GE), Georgia Stonewall Democrats (GSD), Georgia Log Cabin Republicans (GLCR) and/or The Victory Fund (VF) in parentheses after the candidate’s name.