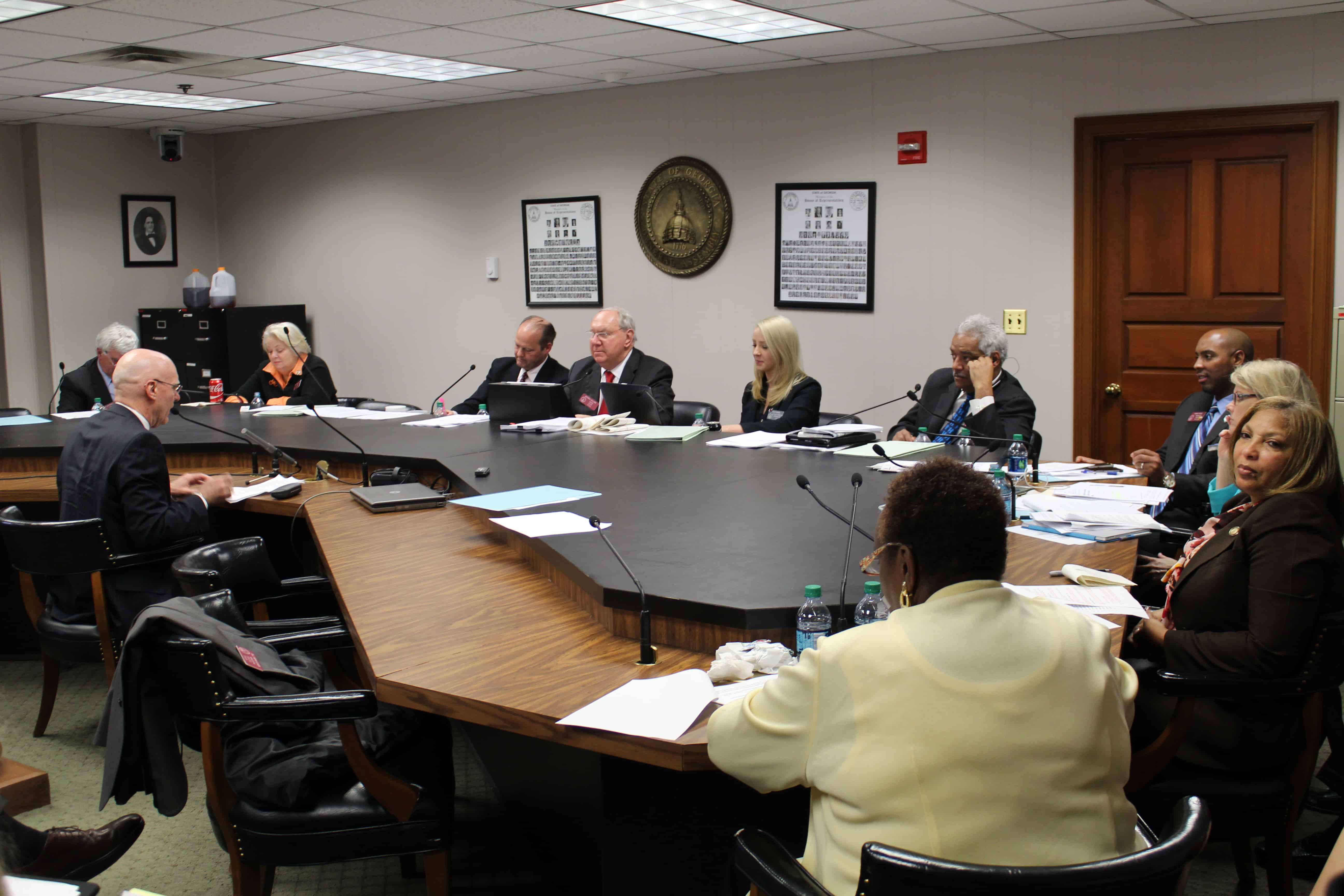 UPDATE ON SUNDAY: The Atlanta Journal-Constitution is reporting the Monday meeting of the House Judiciary Committee to discuss the "religious freedom" bill is canceled. Whether or not it will be rescheduled is unknown. However, the General Assembly's last day, sine die, is April 2. The House does meet again on Tuesday, however. From the AJC's Aaron Gould Sheinin:

The committee was to meet at 10 a.m., to likely decide the fate of a controversial bill for this year. But a member of the committee, who asked not to be identified for fear of angering leadership, told The Atlanta Journal-Constitution the meeting was off. The committee member did not know if it would be rescheduled, but with lawmakers only meeting in session Tuesday and Thursday before ending their 2015 session, time is rapidly expiring on Senate Bill 129.

No idea @ChadDarnell. But I would assume the AJC would not report it if it wasn't correct. But I haven't been notified one way or the other


The meeting's cancellation, or at least postponement, can no doubt be caused in part due to the incredible backlash the state of Indiana is facing following Gov. Mike Pence's signing that state's "religious freedom" bill into law last week. So much so, Pence seemed to be backtracking on the bill's passage and willing to support another bill to "clarify" its intent to not discriminate against LGBT people.

“I support religious liberty, and I support this law,” Pence said in an exclusive interview with the Indy Star on Saturday. “But we are in discussions with legislative leaders this weekend to see if there’s a way to clarify the intent of the law.”

The Washington Post explains clearly why Indiana is facing such furious backlash for passing such a bill. In Georgia, McKoon has repeatedly said in his arguments for the bill that no accounts of discrimination have occurred in the numerous states that have already passed "religious freedom" bills. But those laws were passed before state same-sex marriage bans began falling like dominoes.

The national Human Rights Campaign also chimed in on the SB 129. The AJC's Jim Galloway reports the HRC sent a letter to NFL Commissioner Roger Goodell about SB 129 and Atlanta's bid for the Super Bowl in 2019. 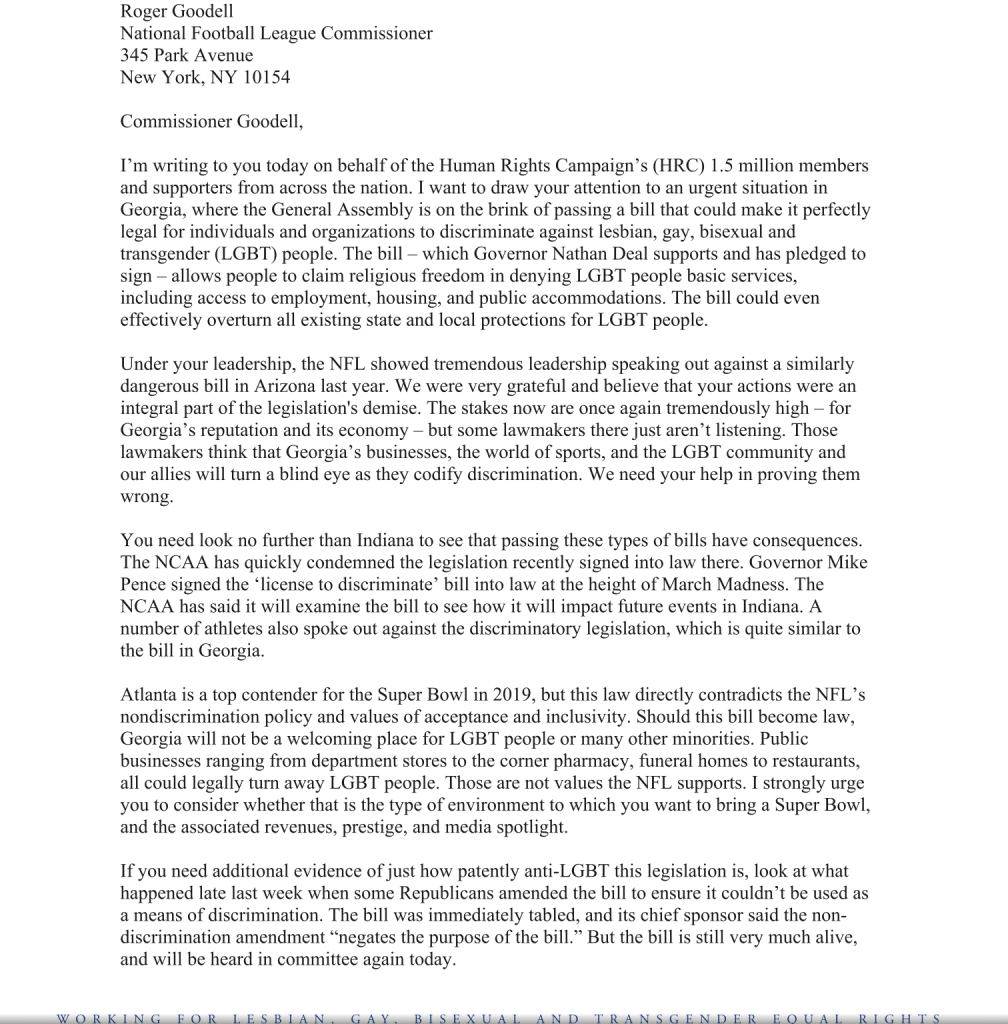 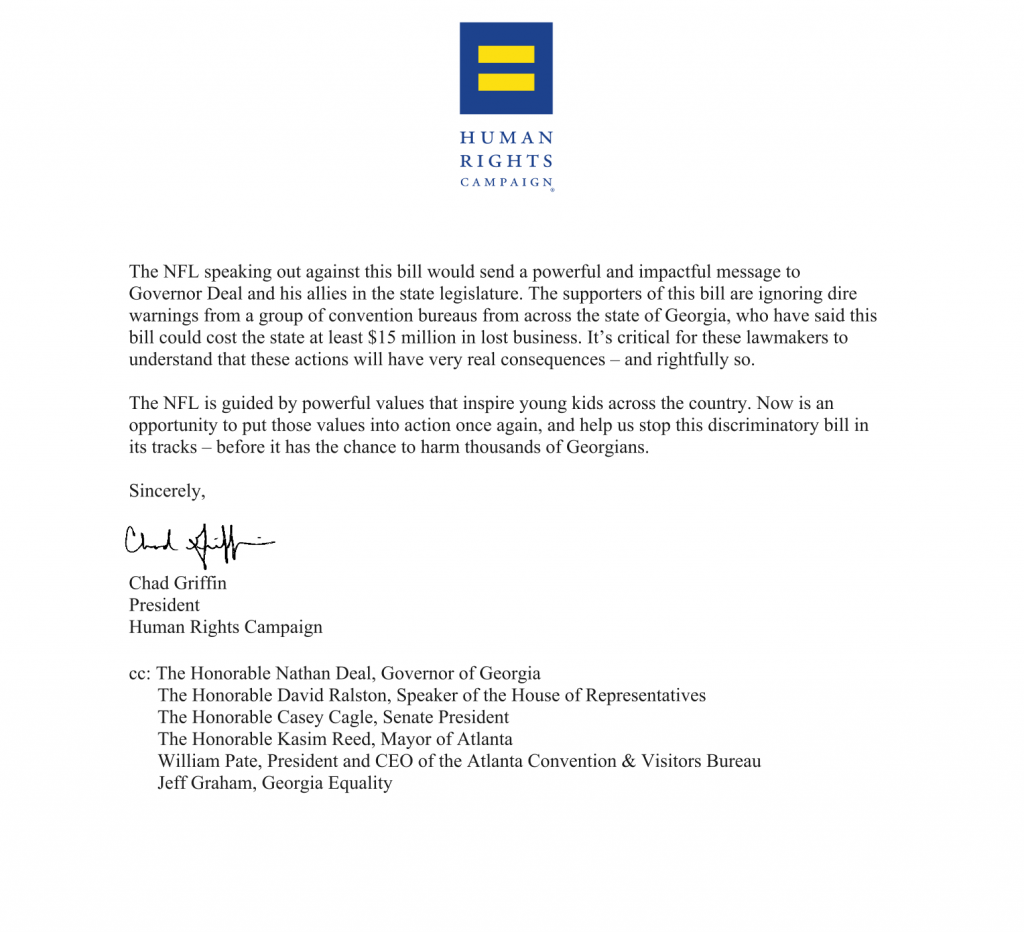 Georgia Unites Against Discrimination issued this email alert on Sunday:

Proponents of RFRA just announced that tomorrow’s crucial House Judiciary Committee vote on the “license to discriminate” bill is postponed.

This turn of events shows that what we’re doing is working. For months, supporters like you have told lawmakers that RFRA is a harmful bill that will have devastating consequences for Georgia—and now, they’re listening.

But make no mistake: RFRA is NOT dead—not yet anyway. Lawmakers are still in session until this Thursday at midnight, and supporters of this shameful bill won’t leave a stone unturned as they work to legalize state-sanctioned discrimination against gay and transgender Georgians.

At any moment between now and Thursday, RFRA could be brought up for a vote. We must remain vigilant; otherwise this harmful bill could still be signed into law.

So on Tuesday at noon, hundreds will rally together in Atlanta to show that the people of Georgia oppose RFRA. Click here for all the details—and let us know you’ll be there to help make history.

Nothing is ever completely dead until the clock strikes midnight on sine die in the Georgia legislature and it appears the “religious freedom” bill has not flatlined yet.

State Rep. Wendell Willard (R-Sandy Springs), chair of the House Judiciary Committee, has called another meeting to discuss the contentious bill on Monday at 10 a.m. Sine day, the last day of the session, is expected to end at midnight on April 2.

Whether or not that news forced the hand of the Atlanta Convention & Visitors Bureau to come out against the bill is not known. But in a statement, the ACVB states the passage of the bill would have a huge negative impact on the city's tourism industry of $13 billion. Read the ACVB's resolution made today: 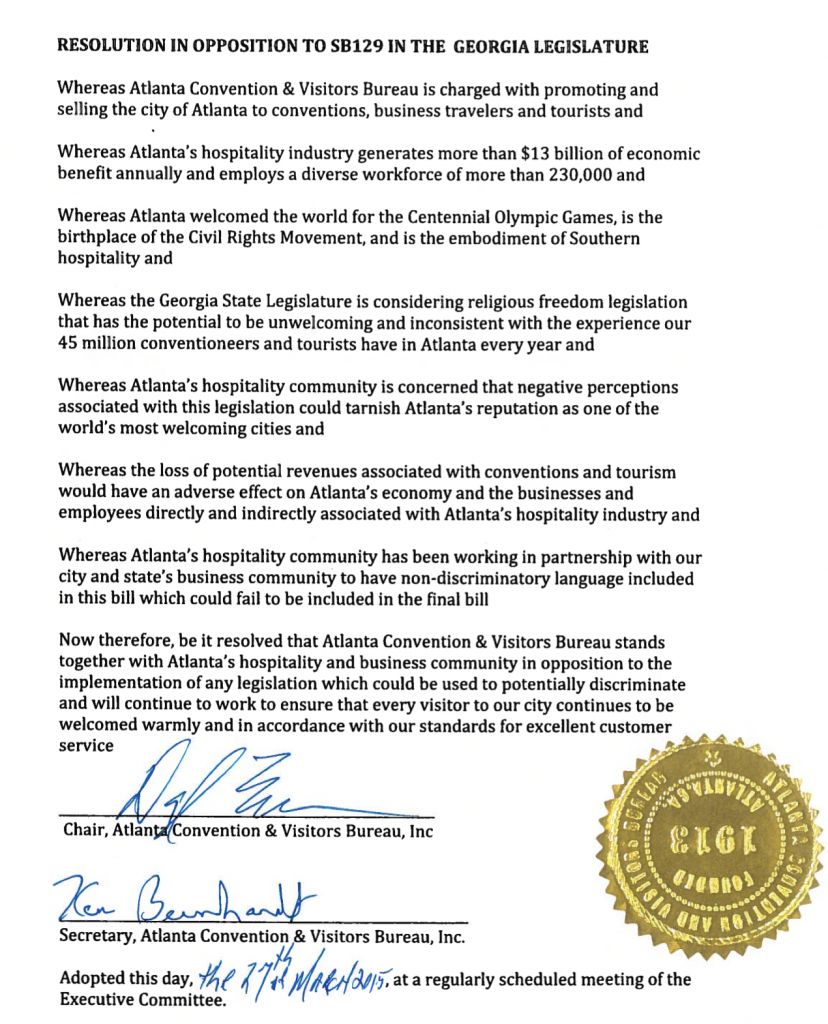 Monday’s meeting will follow week of tense, hours-long sessions and political drama in the cramped committee room located in the bowels of the General Assembly where proponents and opponents of SB 129, the “religious freedom” bill, or RFRA for short, have made their cases.

On Thursday, the bill hit a major hurdle and was declared almost dead after LGBT-friendly Rep. Mike Jacobs (R-Brookhaven) made an amendment to include protections against discrimination in the bill. The exact language of Jacobs’ amendment stated it would protect against “discrimination on any ground prohibited by federal, state or local law.”

State Sen. Josh McKoon (R-Columbus), sponsor of the bill, warned against such an amendment, saying it would totally gut the purpose of his bill.

The amendment was approved 9-8, including three Republicans who voted with Democrats—Jacobs, Rep. Beth Beskin of Atlanta, and Rep. Jay Powell of Camilla—resulting in Rep. Barry Fleming of Harlem, visibly angry with the amendment,  to make a motion to table. That motion to table was approved.

Fleming said during an earlier meeting on the bill that is vote on this bill would "be the most important vote" he would ever cast during his tenure in the legislature. Fleming was elected in 2012.

Often, when bills are tabled in the last few days of the session, it is essentially dead. But there are still ways to revive it. Last year,  McKoon tried a Hail Mary pass to get his bill attached to another bill on the last day of the session, but it was ultimately defeated.

It appears another Hail Mary could be in the works for the Catholic legislator.

From the Atlanta Journal-Constitution:

Three days remain in the 2015 legislative session, and while the bill faces steep odds of recovering this year, it is possible. It would require Willard calling another committee meeting, a successful motion to remove the bill from the table, a vote to again amend the bill to make it palatable to Fleming and others, votes to fend off other amendments, and then a vote on the bill itself — just to make it out of committee.

Of course, there is also what is known by some as “ornamenting,” or adding amendments to other bills like you add ornaments to a Christmas tree, to get a bill through before the clock strikes midnight.

Also from the AJC:

Battle-hardened lawmakers typically have a running list of other pieces of legislation they could potentially tack their bills on if they run into problems. Sometimes that means amending an otherwise innocuous proposal, other times it means forcing the language upon a bill that also happens to be a legislative leader’s top priority.

With the latter in mind, keep an eye on HB 59, which deals with the obtuse topic of sovereign immunity. The prime author is Wendell Willard, chairman of the House Judiciary Committee that tabled SB 129 on Thursday. It remains in the Senate Judiciary Committee, chaired by state Sen. Josh McKoon, R-Columbus, author of SB 129.

Did we mention that revenge sometimes get personal at the Capitol?

And it's no secret McKoon is very displeased with Willard’s leadership of his committee.

Georgia Unites Against Discrimination, made up of Georgia Equality and the Human Rights Campaign, warns the meeting set for Monday is designed to cut the Jacobs amendment.

BREAKING: House Jud. Committee will meet on Monday at 10am. RFRA supporters will try to cut #SB129 of discrimination protections. #GAPol

On Friday morning, McKoon took to the state Senate well and promised his bill would pass, either this year or next year, as noted in this video from Project Q Atlanta:

“And while obviously it is disappointing when you hit a roadblock, those of us who are fighting for the religious freedom and religious liberty for 10 million Georgians, we are undeterred, we are not going to stop, we are going to keep working. And we will prevail,” McKoon said today.

Georgia Equality, the state's largest LGBT group that has been fighting the bill since last year, is also keenly aware of how politics works under the Gold Dome and is urging supporters to continue contacting their representatives. From an email sent to supporters today:

The bill’s sponsors can still try to sneak RFRA into an unrelated bill at any moment before now and the close of session. We’ll have to watch the Georgia General Assembly like a hawk to ensure they don’t resort to any of these dirty tricks.

Click here to tell your Representative: The writing is on the wall—RFRA is a discriminatory bill and it should not advance any further.

If RFRA can’t be used to discriminate against LGBT people, then our opponents won’t even support their own bill. They want a “license to discriminate”—and trust me, they’re still working to push forward this agenda right now.

So until April 2nd at midnight, when the Georgia legislature adjourns for the year, we must keep up the pressure on our elected leaders to let them know we won’t back down without a fight.

News of Indiana’s Gov. Mike Pence signing that state’s “religious freedom” bill into law drew praise from McKoon, but has also resulted in major backlash from LGBT activsts and celebrities, major corporations and even the White House, with everyone noting the bill wil do nothing more than embolden LGBT discrimination.

In Georgia, major corporations such as Delta Air Lines and Coca-Cola have stayed out of the "religious freedom" fray so far, frustating many who believed their opposition to the bill last year helped defeat it.