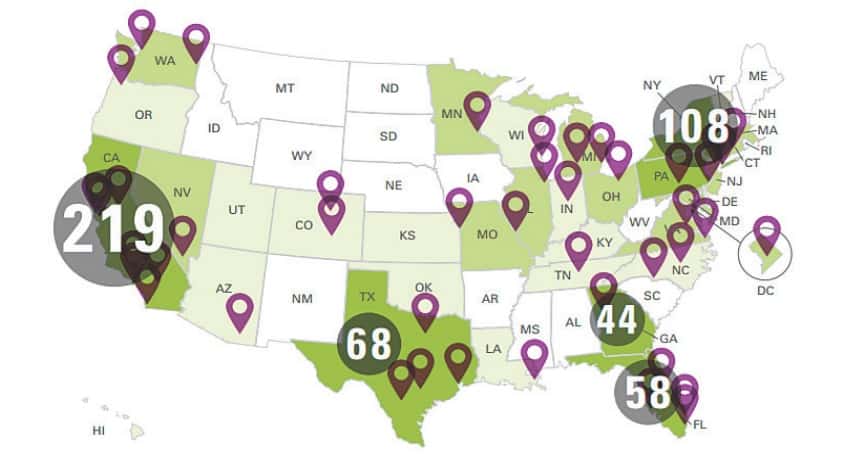 Money is power, both personally and politically, and the National Gay and Lesbian Chamber of Commerce attempts to quantify how much revenue LGBT-owned businesses create, and how they impact communities across the country by releasing a report called “America’s LGBT Economy.”

In Atlanta, there are 44 enterprises that are at least 51 percent LGBT-owned and registered in the Chamber’s study. Dan Dunlop, vice president of the Atlanta Gay and Lesbian Chamber of Commerce, says that number is both underreported and growing.

“That’s just self-reporting, we know that it’s a much, much higher number, it’s probably significantly underreported,” Dunlap said, adding that the Atlanta Chamber works actively to get more companies to participate in the next survey.

Dunlop said in the current political climate, being able to show that LGBT-owned businesses create at least 33,000 jobs with an estimated $1.15 billion in earnings nationally can have a priceless impact.

“I think it reflects our collective strength,” Dunlap said. “When some try to minimize the LGBT community, having assessments like this paint a very strong picture of the LGBT community, that we should not be marginalized and there is strength in our community.”

In March 2016, North Carolina passed the “Public Facilities Privacy & Security Act,” commonly known as House Bill 2, that made it illegal for transgender individuals to use the bathroom of their choice and overturned local anti-discrimination laws. Georgia passed House Bill 757, the Pastor Protection Act, another example of anti-LGBT legislation, in 2016. Gov. Nathan Deal later vetoed the bill.

Deal’s veto came after North Carolina lost millions in revenue. Like most things in politics, that number, or even if any revenue was lost at all, can’t be agreed upon. The NBA, NCAA and others pulled games out of the state, and companies like PayPal and Deutsche Bank altered their expansion plans. In Georgia, companies vowed to do the same, with Disney promising to pull Marvel’s movie production out of the state, where it filmed at least part of “Ant Man,” “Captain America: Civil War” and “Guardians of the Galaxy Vol. 2.”

“When our rights could be chipped away, and we’re just a few votes away from being North Carolina at any time, I think the economic muscle is a huge factor to make sure that equality continues,” Dunlap said. “I think it’s uber-critical that we continue to measure these things so that when the human rights are in question, the economic impact will not be.”

Over 450 members in local LGBT Chamber

For the most part, “rainbow businesses” see the same problems that any existing company or startup faces, but Chamber members say they find strength in their community. Ernest Duncan started his first business at age 55 last year when he opened an Experimac franchise in Midtown.

“I guess I’ve grown up in a family of entrepreneurs … my parents and grandparents own their own businesses and it’s my time to do it,” Duncan said.

Duncan sells refurbished Apple devices and does repairs on-site. He is a link to the past while representing the modern face of LGBT businesses. Duncan chose Midtown because of its large number of Apple users, but appreciates being in a “gayborhood.”

“As I was looking for locations I wanted to find an area where there were a lot of Apple users, because that’s where our expertise is,” Duncan said. “But, as an African-American, and also being gay, you gain a lot of persistence, a lot of creativity and a lot of ways to get noticed. As customers come in and they find out the owner is African-American and gay, they feel a lot of ownership because they can identify with me as part of the community.”

Dunlap said the 450 members in the Atlanta Chamber represent all fields of business, and most serve more than just the LGBT community, which comes with a bit of risk.

“I think it’s a very low percentage of gay-owned and gay-focused business models. We’re very mainstream, wealth management and production,” Dunlap said. “I think they have the same problems that normal businesses have, capital and cash flow, but that’s inherent in any business. I think there is an added element that businesses who are LGBT need to know who their customers are. We had one member who was dropped by a client when they found out she was a lesbian… That’s an added challenge, if you will. I think we all have that one client that if they knew, they might walk.”

The National Gay and Lesbian Chamber of Commerce certified businesses based on their willingness to participate in the survey, if they were majority LGBT majority owned and were headquartered in the United States. The following is a breakdown of its research.
Total Companies: 909
Companies in Atlanta: 44
Top Sectors: Consulting 99, Marketing 90
Average Company Age: 12 years
Total Employees: 33,000
Average Revenue: $2.4 million