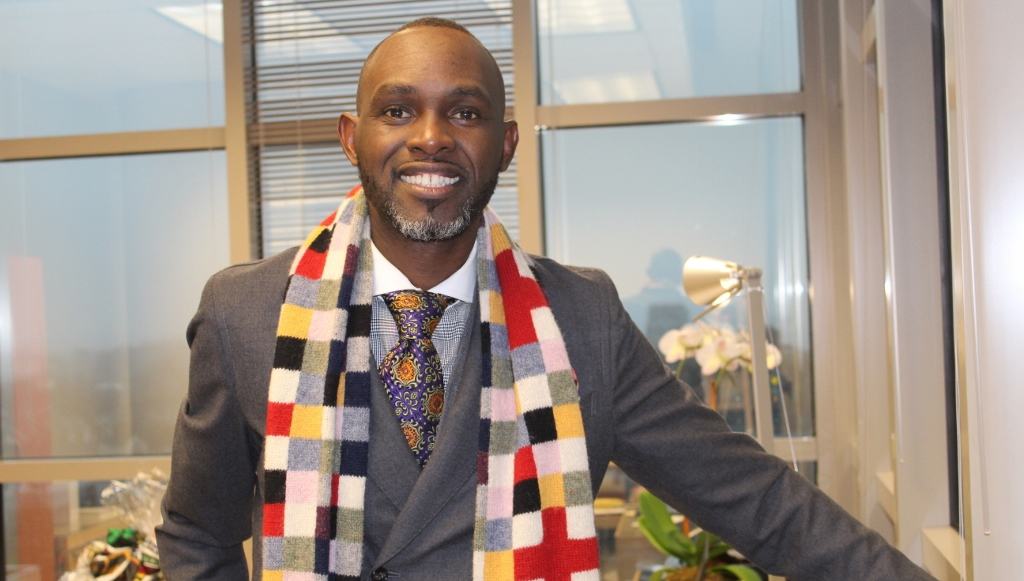 Derreck Kayongo is at ease. The newly named CEO of the National Center for Civil and Human Rights glides through the organization’s administrative offices at the American Cancer Society building downtown, greeting his new co-workers and cracking jokes along the way to his corner office.

Which makes it all the more surprising when you find out Kayongo’s background. He’s a Ugandan refugee who fled the country with his family at age 10, escaping a civil war and settling in Kenya. He eventually landed in the United States, gaining major notice for founding the Global Soap Project in 2009—a project that takes partially used bars of soap from hotels and recycles them into new soap to redistribute to vulnerable populations across the world.

But what to make of the man who hails from a country that most of Atlanta’s LGBT community knows as the one that almost passed a “kill the gays” bill last year? There’s support in place at the Center for the LGBT community, especially with the formation of the LGBT Institute. The question is where that conversation goes with Kayongo in charge.

Kayongo, who lives with his wife in Atlanta, admits he didn’t know anything about the LGBT community when he first moved here in 2000 to head up the Quaker social justice organization, American Friends Service Committee.

“I didn’t understand what that was. Lesbian, gay, bisexual, transgender—I didn’t know what those characteristics were, or what those silos represented because I had not been exposed to it,” he says. “And I think that the word here is ‘exposure.’ That if we expose you to new knowledge, that you evolve based on that new knowledge.”

He later became regional director of Amnesty International then landed at humanitarian relief agency CARE for a decade, making for a résumé strong on human rights, and he doesn’t shy away when asked about notoriously anti-LGBT Uganda.

“All I can say is that for a country that is very familiar with oppressions of all kinds, how do you turn around and then say you’re going to give a life sentence to somebody because of their being?” he says of his home country. “Anytime you don’t have enough evidence of your conclusions, don’t go to the extreme of judgment or of antipathy. A healthy dialogue is good but don’t jump to extremes.”

Kayongo says he plans to be a voice that speaks out against that work.

A background in faith

Kayongo has a strong faith background, getting his undergraduate degree from private Christian school Messiah College in Pennsylvania and later serving as an adjunct professor at Beulah Heights University, an Atlanta Bible college. Messiah has made headlines over the years for its “Community Covenant,” a document students are required to sign that bans “homosexual behavior,” among other things. So does Kayongo believe being gay is a sin?

“Absolutely not,” he says. “I don’t equivocate about those things because when I start to look at different kinds of sins, that’s kind of an endless journey. I will let the theological minds think about sin and what it is.”

And as far as the Messiah controversy goes, he says, “I think institutions are different from individuals, and institutions have to protect a particular doctrine that they’ve been subscribing to for a long time. Individuals sort of evolve out of those doctrines faster than institutions. You can mention that about any institution. The Catholic Church, President Obama also evolved. We evolve.”

‘I want people … to own this building’

The Center’s new CEO says that while they don’t take a particular stand on everything, they do believe in certain rights.

“Our job at the Center is to be a convener of understanding and accommodation because once we draw lines and we say ‘You are the other’ then crimes are going to happen and you’re going to enable people that don’t even belong to your moral value because they don’t know better,” he says. “We are very cognizant of [the LGBT community’s] presence and their rights, and the space that they’re talking about is very, very equal to the other rights we are fighting for.”

The next LGBT event on the Center’s calendar is a panel discussion on human trafficking and LGBT youth set for Jan. 26, a couple weeks after an LGBT Atlanta history exhibit that debuted last fall will be taken down.

“I want people like yourselves to challenge the state, to own this building. And when I say the building I mean all the work that it represents, all the things that we can do together to make corporate America better, to make religious institutions better, to make schools better,” Kayongo says, wrapping up the discussion by tying everything into the broader topic of human rights.

“For me, my vibrance, my very fabric, my passion is around ‘Did you, after you came through your scruples and your agnostic or believing thoughts, did you end up saying at the end of the day, they are my fellow human being?'”