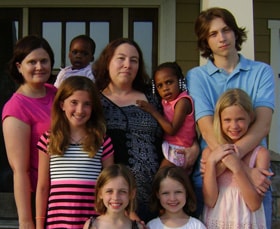 Add another pair of voices to the fight to bring marriage equality to Georgia. Beth and Krista Wurz have been added as plaintiffs to Inniss v. Aderhold, the federal class action lawsuit attempting to strike down Georgia’s 2004 same-sex marriage ban.

Lambda Legal cites the marriage ban keeping Krista from receiving health coverage through Beth’s job, as well as keeping them from being able to adopt their seven children jointly.

Beth Wurz, 41, and Krista Wurz, 39, were married in October 2010 in New Hampshire and are raising their seven children, including five placed with them through the foster care system, in their Brunswick home. Beth is an English professor at College of Coastal Georgia and Krista, an Air Force veteran, is a special education teacher. Since their marriage is not recognized in Georgia, Krista is denied health coverage through Beth’s job, as are some of their children. Because of the marriage ban, they also have been denied the ability to adopt their children jointly. They are always worried about traveling with the children or caring for them in emergencies since they are not both recognized as their children’s legal parents.

Beth wrote eloquently about her experience having a baby by using a sperm donor in the literary journal Quarterly West.

Lambda Legal has until Sept. 5 to respond to Attorney General Sam Olens’ motion to dismiss the lawsuit and the GA Voice will post an update as soon as a response is filed. Yesterday, Olens’ office was fined $10,000 for failing to turn over evidence in a whistleblower lawsuit involving the state ethics commission and Gov. Nathan Deal’s office.