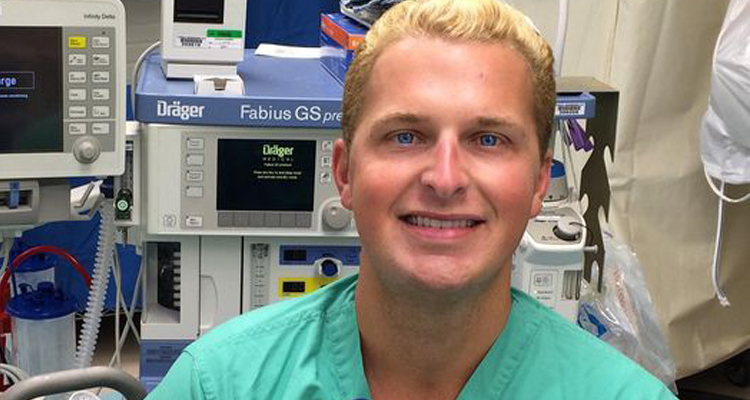 Stewart Parnacott, a nurse anesthetist at Emory Hospital Midtown, decided he would run for a seat in Georgia’s House of Representatives when he was in the emergency room one day back in 2020, right around the time Governor Brian Kemp was sparring with Atlanta Mayor Keisha Lance Bottoms about mask mandates. He was treating a COVID-19 patient who was about to be intubated. The patient’s sister had just died from COVID. He looked up at the TV in his room, saw the arguing politicians and said, “We have to do better.” That was the beginning of an idea that led Parnacott to recently announce his candidacy, one featuring an openly LGBTQ candidate new to politics.

Parnacott grew up in Albany, where it was difficult to be gay. “It was something that I tried to hide about myself,” he told Georgia Voice. “But what I once saw as a weakness, I now see as a strength. And I hope that I can take that strength to the Georgia House.” He came out after he graduated college and started nursing.

Because of his background and the still pervasive pandemic, health care is his number one issue. Expanding Medicaid, protecting a woman’s right to bodily autonomy, and saving rural hospitals top his list of health care priorities. But talking with him, it’s clear that he has other passions as well, including affordable housing. He and his partner Adam run a real estate business.

The couple volunteer with a group called Let Our House Be Your Home. This group works with domestic abuse victims, veterans, people just getting out of prison and others to help find affordable housing solutions to prevent homelessness.

“When people have a roof over their heads, they’re more likely to be successful,” Parnacott said.

His website’s “issues page” discusses increasing the supply of affordable housing units and keeping legacy residents in their homes.

Parnacott is a Democrat and most likely will enter a Republican-dominated state house. He believes, however, that cooperation will win the day.

“I fully understand that I might have to take my name off of a bill in order to get it passed so it doesn’t have a Democrat’s name on it,” he said. “And I’m okay with that because it’s really about accomplishing a larger goal.”

He counts among his earliest and biggest supporters his parents, who he recalled were surprisingly comfortable with having a gay son after he came out. Parnacott promises to be a voice and an advocate for the LGBTQ community in Georgia, where we have some of the weakest civil rights laws in the nation and face continued discrimination.

“Even last year, there were over 250 anti-LGBTQ bills that were introduced,” he said. “Some of them were passed. Some of them are just waiting on the governor’s desk for him to sign. One of the things that I’m very interested in doing is codifying into Georgia law a civil rights law that includes protection for LGBTQ citizens.”

Democratic superstar Stacey Abrams previously represented the district, a fact prominently noted on the campaign websites for Parnacott, Nguyen and another declared candidate for House District 90, psychologist Michelle Schreiner. We’ll find out who else is throwing their hat into this race before candidate qualifying ends on March 11.

In the meantime, Parnacott is getting comfortable with the idea of runninga campaign.

“It’s definitely a learning curve,” he said. “Mobilizing a team of volunteers is something that’s very important to me right now and also just me getting out there myself, making those phone calls, making those connections, meeting with local business owners.”

Parnacott intends to start ramping up his campaign with events and speaking engagements in February. The Democratic primary will be on May 24 and could determine the next representative for House District 90.