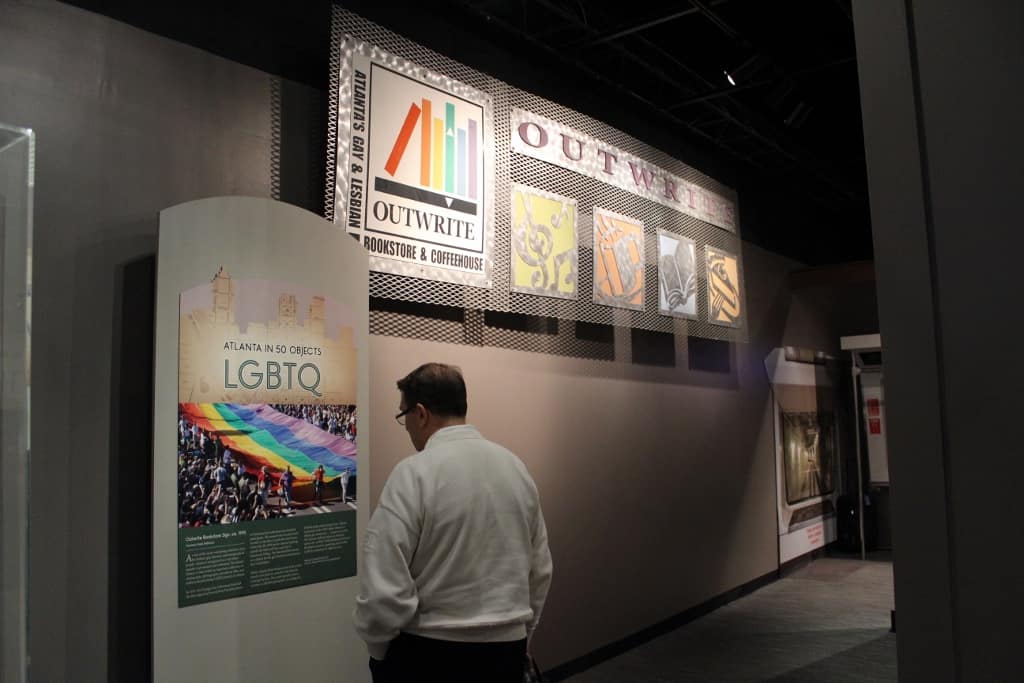 Miss the good old days of the late, great Outwrite Bookstore & Coffeehouse? The Atlanta History Center is giving folks a way to reminisce as the sign from the 10th Street side of the store is now on display in the “Atlanta In 50 Objects” exhibit.

Outwrite closed in Jan. 2012 after 18 years of business, with restaurant 10th & Piedmont taking over and renovating the space at what is considered the center of LGBT life in Atlanta.

The sign was chosen to represent the city’s LGBT community after the Atlanta History Center solicited the public for ideas for objects that best represent Atlanta. Exhibition co-curators Don Rooney and Amy Wilson then narrowed down the list and the Outwrite sign made the cut, along with other iconic Atlanta objects like a first edition of Margaret Mitchell’s “Gone With The Wind,” a “Save The Fox” t-shirt, the Pink Pig from Rich’s, a torch from the 1996 Olympics, Willie B’s handprints in plaster, an SCLC donor envelope to represent civil rights activism and more.

The Atlanta History Center contacted former owner Philip Rafshoon last spring about potential memorabilia that would be appropriate for the exhibit.

“I did not expect that they would want a piece that was as huge as the sign—it is 4 feet high by 11 feet wide. It was stored at a good friend’s house and I had actually forgotten exactly what it looked like,” Rafshoon told Georgia Voice, adding, “I believe it is a fantastic way to include an LGBT landmark in this exhibit and I am very proud that it is included with other Atlanta landmarks such as the Varsity and Coca-Cola. Outwrite was not only a place for members of our community to gather, learn, and improve their lives but our visibility helped change the general public’s attitudes about our lives.”

Rafshoon says he has many of the other Outwrite keepsakes—like the mirror ball, the Outwrite banner that hung in the corner, pieces of signed author walls and scads of photos, stories and promotional materials—at his home and in storage, and he’s working to find a permanent home for much of it.

But for now, you can check out the Outwrite sign and other iconic Atlanta objects at the exhibit, running through early July.

UPDATE: We followed up to ask the Atlanta History Center what other objects were under consideration to represent Atlanta’s LGBT community. Here’s what they said:

Don Rooney, Director of Exhibitions and co-curator of “Atlanta in 50 Objects”:
“The curators pondered the materials in the Kenan Collection and some items in the museum collection. While significant items exist here (for example, scores and scores of political buttons, and almost every LGTBQ periodical published in Atlanta), we determined that, whatever we chose, a single item would be difficult to convey the breadth of Atlanta’s rich LGTBQ community history. We looked at the Outwrite sign eventually as something spanning time, and subject. It marked a geographic site, important in Atlanta’s LGBTQ community … Outwrite served as social, intellectual, and cultural meeting place. The sign as artifact would be something familiar, yet gone, for many people who had passed through that intersection over time. ”