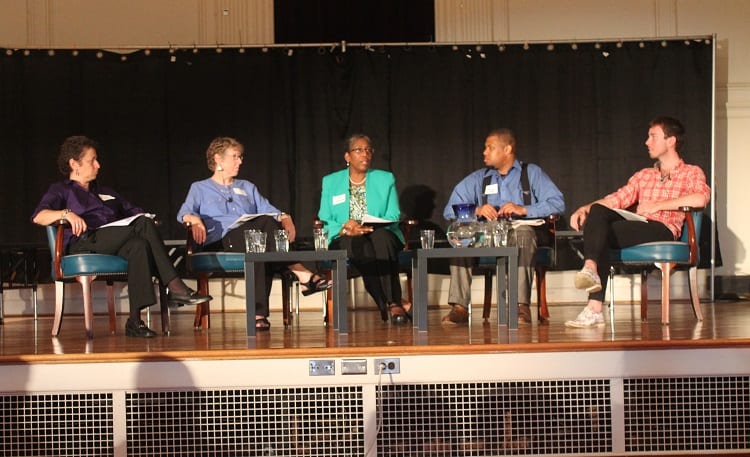 ‘We are a threat’: LGBT panelists tackle nuances of Ga. marriage equality fight

A crowd of more than 100 people gathered at the Friends School of Atlanta on April 26 to hear a diverse panel of speakers discuss marriage equality in Georgia. This was the school’s fourth annual Beloved Community Dialogue, which addresses a different civil or human rights issue each year.

There was a buzz in the air as the event came just days after Lambda Legal filed suit on behalf of three couples and a lesbian widow to strike down Georgia’s 2004 same-sex marriage ban.

The panelists came from a variety of ages, backgrounds and viewpoints but the thread of course was that they were all LGBT.

Fulton County Commissioner Joan Garner, who moderated the forum, pointed out that she has always looked at social issues from a variety of perspectives, not just an LGBT one.

“For me it was about connecting the dots, not just a single issue,” she said.”Because the last time I looked in the mirror, the person I saw was a woman, African-American, lesbian, now I’m aging. So I bring all of those issues to the table.”

“The reality is that the courts are influenced by politics,” she said. “While [the judges] are not elected, they watch what’s going on in the country and you’ll see that the timing of rulings that deal with human rights often reflect the movement in the country.”

So much of the argument for and against marriage equality circles around family, said Dr. Susan Barrett, a psychologist. She discussed how LGBT couples are helping to change the nature of the traditional “nuclear family” and how that shift is being perceived by the more conservative factions of the country.

“We are bringing with us all of our experiences of how we have done it differently,” Dr. Barrett said. “And yes, along with other racial groups and cultural groups, we’re changing the very nature of what it means to be a family. We are a threat.”

Panelist Branden Mattox is the director of the Love Under Fire Campaign to overturn Georgia’s ban on same-sex marriage. He spoke from a religious perspective, noting that he was raised as a devout Baptist and is a deacon at the LGBT-friendly Gentle Spirit Christian Church.

“While many of us may not be associated with a traditional church or we’re not churchgoers, we cannot escape that it’s going to be a faith fight as well,” he said.

22-year-old Conrad Charleston, who already has nearly a decade of LGBT rights activism under his belt, talked about what role marriage equality plays in the broader struggle for LGBT rights. Charleston said that bullying, suicide and drug abuse have been the more pressing LGBT issues among he and his younger peers.

No matter the perspective or background, whether legal, psychological, religious or generational, all spoke of the need to be out there and to speak up about LGBT issues as the fight to bring marriage equality to Georgia gains momentum.

“It goes back to education,” Shahar said. “Every time we get out in public, just to be living with integrity and letting the world see who we are and understand that we’re humans—that’s a win.”

“Plug in and support this,” Mattox said. “Talk to your friends and co-workers about this. Have them communicate with their legislators and begin changing minds. We can do this.”