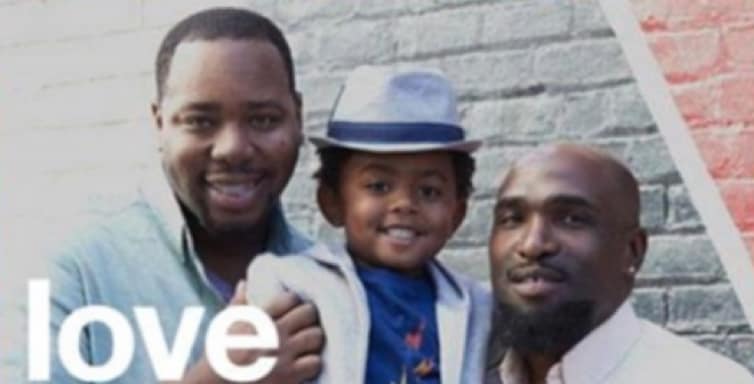 The Henderson-Strong's pose for a family photo during the finalization of their son's adoption. (Photo via Facebook)

Atlanta gay couple Jason and Anthony Henderson-Strong are learning first-hand how vicious online bullies can be toward gay and lesbian families. The Henderson-Strong’s are the latest gay family to be on the receiving end of hateful homophobic messages via a photo posted by @lovehasnolabels_ on Instagram. The photo was taken earlier this year during the viral video for “Love Has No Labels,” an ad campaign sponsored by The Ad Council.

The campaign was created to challenge viewers to “rethink bias and to work to stop it in ourselves, our friends, our families, and our colleagues.”

It’s probably safe to say that the people trolling the family’s photo missed this challenge or completely ignored it.

“Kids adopted into family’s like this have to grow up confused and people may make fun of those children,” wrote one commenter.

“I don’t understand why they didn’t have a daughter that poor boy doesn’t have a chance to choose what he wants to be he’s automatically gonna grow up thinking being with another man is ok,” wrote another commenter.

The Henderson-Strong’s spoke with Georgia Voice about the homophobic backlash their family has received since the photo was posted online, and while they’re not surprised, they do find some of the comments to be extremely sad.

“I will say the majority of them I’m not privy to. I don’t go online and read the comments,” says Jason. “It’s some of the most hateful and venomous stuff I think I’ve ever read in my life.”

“I think it’s very funny that a lot of the opinions I read…when you’d go to their page it was normally blocked,” says Anthony. “Most of the negative comments were coming from ghostwriters in a sense and all of the positive stuff was coming from people who didn’t mind sharing their own page. “

It seems to be an alarming trend, where e-ballers are finding refuge in the anonymity the internet provides to spew vile hatred.

You may recall Georgia Voice reporting on Kordale Anthony and Caleb Lewis , another Atlanta gay couple whose 2014 Instagram photo of their family sparked a wave of homophobic comments and interrogation on the ability of gay parents to raise children.

“Marcel has two dads and that’s just what he says,” says Anthony. “

The couple who recently moved to Atlanta from Los Angeles, says it wasn’t uncommon for their son to be surrounded by other kids that also had gay parents at his former West Hollywood school.

“I sat him down and explained to him all the different facets of what families look like. As he gets older we’ll have to have the conversation again and it will change. But I think we explained it to him in a way a five-year-old can explain it to another five-year-old.”

The Henderson-Strong’s also take issue with the repeated argument from those who oppose their family about the lack of female role models for boys who are fathered by gay dads.

“One of the comments that struck me was he’s a motherless child. I was like, wow. Believe it or not, he probably has more mothers and females surrounding him than maybe the average five-year-old who might have a mother and a father, “says Anthony.

It hasn’t been all bad news for the Henderson-Strong family. The couple’s appearance in The Ad Council’s “Love Has No Labels” video has received more than 54 million views to-date on You Tube and their image with the tag line “Love Has No Gender” appeared in the Oct. issue of EBONY Magazine. 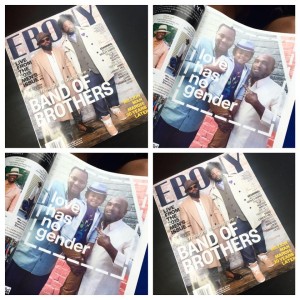 Jason says he was absolutely “dumbfounded” to see his family in EBONY Magazine.

I had no clue that it was even being considered,” he says. “ Anthony took me to the supermarket and told me it was a great article in EBONY Magazine about Philly (Anthony is a Philadelphia native) on page 45. I went to page 45 and went “oh my God!”

“I was really honored that not only was it EBONY, but it was their once-a-year men’s edition and we were the only openly gay family,” says Anthony.

It was indeed a huge honor and a moment of inclusion for gay families in a revered African-American publication that should not be overlooked.

The Henderson-Strong’s frequently post images of their family on Facebook with the quote: “Loving our son to life.” That’s something their haters could use a bit more of.