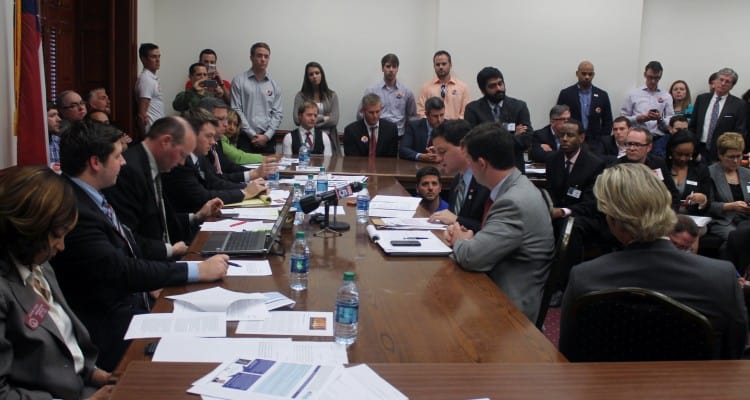 And the drumbeat slowly gets louder. Progressive political advocacy organization Better Georgia is up with a petition against state Sen. Josh McKoon’s so called “religious freedom” bill, which McKoon says he will introduce in the upcoming legislative session in January.

Tell your lawmakers that businesses and individuals should not be able to use religion as an excuse for discrimination based on sexual orientation or any other reason. State Sen. Josh McKoon (R-Columbus) tried to introduce his anti-gay bill last year and failed. Now, he’s promising to introduce the bill again.

“Georgia Lawmakers: Sen. McKoon’s “religious freedom” bill does not protect freedom, but rather, strips people of it, and should be struck down.
Arizona’s radical anti-gay law is not a model that should be followed in Georgia. As a lawmaker, you should stand up for the rights of all citizens by rejecting legislation that supports discrimination.”

Better Georgia, led by openly gay executive director Bryan Long, was involved in the fight against the same bills in this year’s session, introduced by McKoon in the state Senate and Rep. Sam Teasley in the state House. A similar petition ended up garnering over 3,000 signatures.

It’s another voice speaking out in the wake of Sen. McKoon’s repeated intention to reintroduce another “religious freedom” bill in January, despite the controversy and eventual failure of the bill in this year’s session. McKoon believes his 2014 bill was mischaracterized as anti-gay and was different than a similar bill in Arizona that was eventually voted by Gov. Jan Brewer.

“This discussion about denial of services, the so-called ‘right to discriminate,’ and other things just frankly were not in any way representative of what the legislation would do,” McKoon told Creative Loafing last week. “[My bill] sends the opposite message that Georgia is welcoming and a great place to be.”

The bills, called the “Preservation of Religious Freedom Act,” were introduced in both the state House and Senate in the last session, leading to fierce opposition from the state Democratic Party, LGBT advocacy groups and the LGBT community as a whole.

Activists took to Facebook in August by creating a “Tell Josh McKoon No RFRA in GA” page. Then in late October, the Georgia Chamber of Commerce sounded off by releasing a policy statement declaring strong opposition against any such bills.

“Practices that open the door to discrimination or create the perception that Georgia supports a discriminatory business environment would threaten our competitiveness,” Chamber spokeswoman Joselyn Baker told the AJC. “It would likely discourage some investments, and possibly affect our ability to attract the kind of quality workforce that we need for the future.”