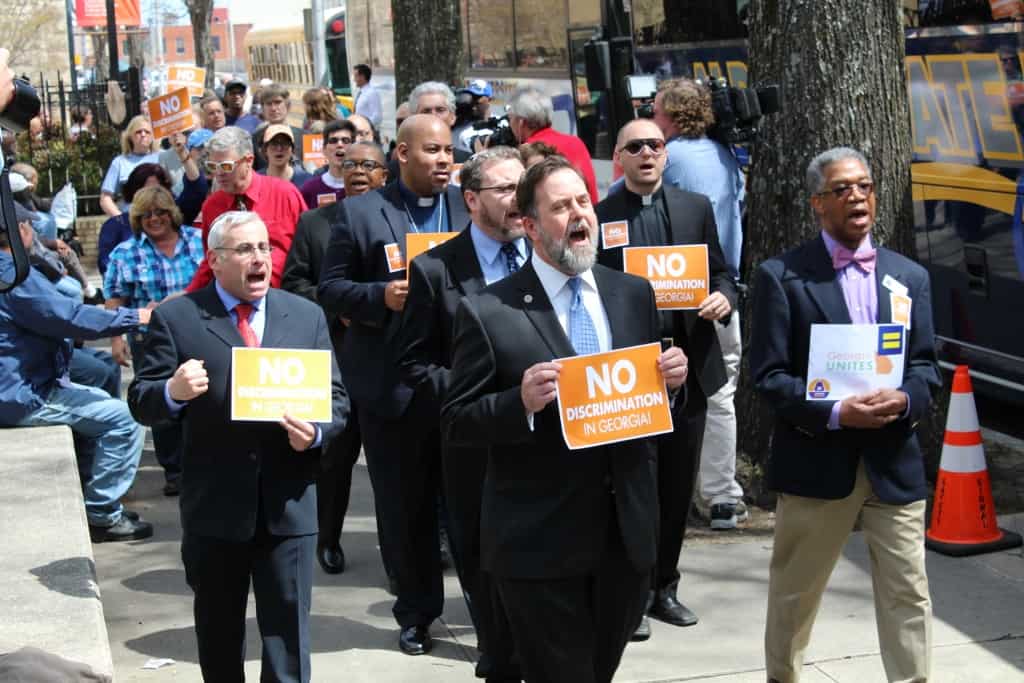 The battle over Georgia’s so-called “religious freedom” bills began relatively quietly, but the introduction of a surprise opponent to the anti-LGBT bills and a jagged momentum shift back and forth over the final weeks of the session made for national headlines. Relive the punches and counter-punches of the fight here.

Jan. 26
A group of 18 legal scholars release a letter objecting to the passage of HB 29.

Feb. 4
Rep. Teasley files House Bill 218, an alternate version of his bill that strips language that appeared to broaden parental rights. The move is made to appease critics who said the previous bill opened up the door to allow child abuse by parents who cite their religious beliefs. No language is added protecting against LGBT discrimination.

Feb. 19
The day after McKoon introduces SB 129, it’s heard before the Senate Judiciary Committee, of which he is the chairman. McKoon rules an anti-discrimination amendment proposed by state Sen. Bill Cowsert, the Republican vice chair of the committee, as out of order. Cowsert criticizes McKoon for not giving committee members enough time to prepare amendments. The bill is tabled, making for a temporary setback for McKoon.

Feb. 21
In the first major bombshell of this year’s “religious freedom” bill fight, Georgia Equality announces that they have hired Republican former Georgia Attorney General Mike Bowers to give his legal analysis of the bills. Bowers was on the opposite side of two of the state’s biggest LGBT rights cases in Georgia history. Bowers slams the bills, calling them a “disaster” and “nothing but an excuse to discriminate.”

Feb. 24
Bowers holds a press conference and says the “religious freedom” bill is nothing more than “an excuse to discriminate.” A group of Georgia Republican state representatives fire back at Bowers, releasing a statement calling him “shameless” and saying that the legal opinion of the former top attorney in the state is not credible.

March 2
SB 129 reappears in the Senate Judiciary Committee at the last minute and is taken off the table and approved for passage out of committee. No Democrats were present to vote on it and the vote occurred while state Sen. Vincent Fort (D-Atlanta), who opposes the bill, was in the bathroom. McKoon’s bill is back on track.

March 5
SB 129 easily passes in the Senate by a vote of 37 to 15 and moves over to the House for consideration. McKoon’s bill continues its momentum towards final passage.

March 9
Rep. Teasley drops his House version of the bill and pledges to do everything he can to see that SB 129 passes. All eyes center on SB 129 for the remainder of the session.

March 11
State Rep. David Ralston, a former state Senator and now Speaker of the House, was interviewed on Georgia Public Broadcasting’s legislative show, “Lawmakers.” He said he is not yet convinced SB 129 is needed. “My question is, and the questions I’ve asked, is if a constitutional guarantee is not sufficient than what is this bill, this statute, going to do that our constitution doesn’t do?” he told host Bill Nigut.

March 17
Georgia Unites Against Discrimination holds a St. Patrick’s Day rally in Liberty Plaza next to the Capitol, drawing at least 200 people in opposition to the bill.

March 18
Progressive and LGBT rights groups, fed up over the business community’s lack of action against the bill this session as opposed to the previous one, publicly call out the Metro Atlanta Chamber of Commerce, the Georgia Chamber of Commerce, AT&T, Coca-Cola and others, for not speaking out as they did last year, helping defeat the measure.

March 23
The Georgia Voice breaks the story that McKoon has ties to an anti-LGBT ministry based in Columbus. McKoon was the registered agent and lawyer for the ministry and had invited its chaplain to be chaplain of the day at the Capitol.

March 24
SB 129 gets a hearing before a special House subcommittee. The hearing ends without a vote on the bill. Jewish leaders speak out before the hearing, denouncing the proposed legislation.

March 25
The subcommittee hearing resumes and SB 129 passes out of committee, moving it on to a hearing before the full House Judiciary Committee. It’s one step away from a House floor vote and McKoon regains momentum.

March 26
After two hours of testimony before the House Judiciary Committee, Rep. Mike Jacobs, a Republican from Brookhaven, introduces an amendment adding language preventing discrimination into the bill, and it surprisingly passes. The bill is tabled, dealing a major blow to SB 129 with just days left in the legislative session. In Indiana, Gov. Mike Pence signs Senate Bill 101, the Religious Freedom Restoration Act (RFRA), into law. McKoon has compared Indiana’s law to his proposed legislation. Indiana’s new law does not contain language preventing discrimination.

March 27
State Rep. Wendell Willard (R-Sandy Springs) calls another meeting of the House Judiciary Committee to occur on March 30, breathing temporary life into the bill. National backlash erupts against Indiana and Gov. Pence, with corporation, politicians and more saying the bill does nothing more than discriminate against LGBT people.

March 28
Thousands of opponents of Indiana Senate Bill 101gather on the lawn of the Indiana State House to rally against the new law.

March 29
On the eve of the House Judiciary Committee hearing, Willard cancels it without comment, taking McKoon by surprise. The move comes amid reports that the Republicans who voted for the anti-discrimination amendment in the previous hearing refused to change their vote. The backlash against Indiana, including calls for boycotts of the state, continue to make national headlines.

March 30
Facing incredible backlash from major corporations, national sports organizations, and thousands of local activists, the Indiana Republican leadership announces they are working on language to a new state bill that would ensure the “religious freedom” bill does not discriminate against gays and lesbians. Democrats, however, want a full repeal of the law.

March 31
Georgia Unites Against Discrimination holds a rally and march in opposition to the bill. Atlanta Mayor Kasim Reed releases a statement shortly afterward denouncing the bill. Gov. Pence pledges to “fix” Indiana’s “religious freedom” bill to ensure it does not discriminate against gays and lesbians.

April 2
Today is sine die at the legislature. Coca-Cola finally comes out in a public statement saying it does not support the “religious freedom” bill. State Sen. McKoon attempts this afternoon to add his “religious freedom” bill to a House bill dealing with pardons and paroles but withdraws the amendment. But finally, in the evening, House Speaker David Ralston says the bill is dead for this year.