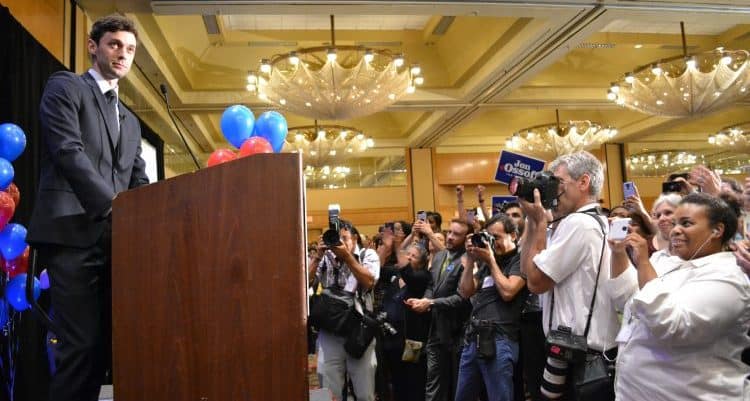 The nation went to bed on April 18, unsure of who would be representing Georgia’s 6th Congressional district the next morning. As of 12:30 a.m. on April 19, there wasn’t a clear answer.

A late-night “rare data card error,” originally reported by Atlanta’s WSB-TV, meant that Fulton County had to start counting hundreds of votes manually. As of 12:30 a.m. April 19, Democratic candidate Jon Ossoff won DeKalb and Cobb counties with 58.6 and 41.3 percent of votes, respectively, followed by Republican candidate Karen Handel in both. His lead in Fulton, with 84 percent of precincts reporting, was 48.7 percent. It wasn’t enough to conclusively say whether or not it would be an Ossoff win, or a run-off between he and Handel in June.

“I know it has been a long evening. And it’s looking like it may be a longer one. We may not know the outcome for some time,” Ossoff said as he broke the news to the crowd of supporters at his watch party Tuesday night.

It had indeed been a lengthy election day.

Festivities kicked off bright and early for the 19 candidates on the ballot for Georgia’s 6th District, all vying for the seat vacated by Health and Human Services Sec. Tom Price.

Much of the attention was focused on Ossoff, a 30-year-old endorsed by national political action committees, politicians and celebrities. The last time the 6th District was represented by a Democrat was 1979.

According to the Federal Election Commission, Ossoff raised more than $8.3 million for his campaign as of election day. His literature flooded mailboxes; commercials played regularly on the radio, television and YouTube. Even President Donald Trump couldn’t ignore the Congressional race — he tweeted negatively about Ossoff, but not about the other 18 candidates in the running.

“All eyes are on us right now,” Ossoff told voters and volunteers at his kickoff. “It’s an extraordinary moment for our community. It’s a rare chance to make a statement about what we stand for, that we believe in a courageous and tough and decent and kind and open country.”

Out of all the candidates on the ballot, Ossoff stood out to his supporters because “he’s really made this about the people,” said Mari Manning, a Brookhaven resident.

“He does not make us feel that this is about him in any way. I think that’s the one thing here, trying to motivate and engage people and figure out what they need and what this district needs,” Manning told Georgia Voice. “I’ve been really, really impressed by his ability to figure out … what the issues are and what went wrong in the past and what it is we need to do.”

“I went to the North Fulton Democrats meeting where all the candidates came to speak very early, and I was impressed of all the candidates, [Ossoff] had the strongest voice. Very articulate, and I just thought, he’s someone who’s going to represent our district well,” Speck said. “The main motivation is to get all those moderate Republicans to realize that their 10-point leads in their districts are not safe and that they need to do what the people want and not do what the Republican party wants.”

Manning said she believes Ossoff will “fight for every person,” regardless of their beliefs or backgrounds, and added he’ll do everything he can to make everyone equal. Ossoff said as much in earlier interviews with Georgia Voice during the campaign trail, speaking specifically to the LGBT individuals he would represent if elected.

“I’m honored to be doing this with you. … With so much gratitude, thank you,” Ossoff said. “Let’s fight right through the finish. Let’s win this today. Let’s flip the 6th District.”