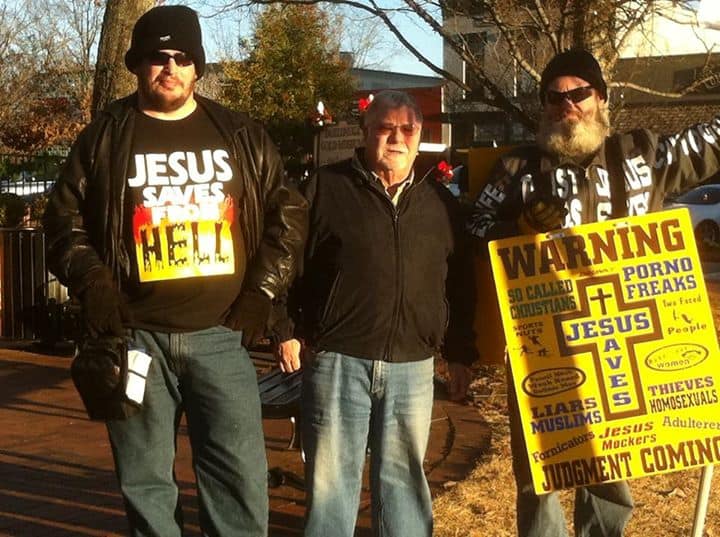 One of the main sticking points in the fight over state Sen. Josh McKoon’s (R-Columbus) so-called “religious freedom” bill is the concern that it would open up the door to more LGBT discrimination. McKoon has sworn that it will not, but new information has surfaced showing ties between McKoon and an anti-LGBT ministry based in Columbus.

McKoon is listed as the registered agent for Chaplain Paul Voorhees Ministries, Inc. Voorhees, the host of “Ranger Joe’s  God & Country” radio show  in Columbus, routinely posts racist and homophobic messages on his Facebook page, including an image of him with fellow speakers at a north Georgia college holding homophobic signs, another image of a heterosexual couple holding hands with the words “Straight Pride” and Voorhees commenting “gay life is like an acting role with a used barf bag,” and an image of the atomic bomb that the United States dropped over the Japanese city of Nagasaki in 1945 with Voorhees calling the victims “rice krispies.”

In other posts, Voorhees appears to compare an African-American looter to President Obama and posts an image showing the Devil supporting same-sex marriage.

McKoon was the one who filed the paper work with the Secretary of State’s office to form the nonprofit corporation in 2011 for Voorhees. As the registered agent of the ministry, McKoon represented it in all legal matters. However, for three years the ministry never paid the annual fees to the state to keep it as an active corporation.

The latest entity status date for the ministry was February 2, 2014 and it showed the corporation was to be dissolved. Voorhees has set up a new corporation, Chaplain Paul Voorhees Ministry, Inc., that became active in April 2014 and lists a different registered agent, Robert S. Poydasheff. Poydasheff, a former mayor of Columbus, Georgia, endorsed McKoon for the state Senate in 2010.

McKoon, who did not return a message left for comment Monday evening, and Lt. Governor Casey Cagle invited Voorhees to the Georgia State Capitol to be the chaplain of the day in 2011.

“I am proud to have introduced him to my colleagues, and his poignant words reminded me of the challenging, yet rewarding, days we have ahead of us,” McKoon said on the day Voorhees came to the Capitol. Voorhees was also chaplain of the day in 2012, but it is not clear if he was invited by McKoon.

Muscogee County public records also show that Voorhees is McKoon’s landlord. And the two served on the steering committee of the Georgia chapter of the Campaign to Fix The Debt, an economic group run by fiscal conservative billionaire Pete Peterson that aims to scale back social programs like Medicare, Medicaid and Social Security.

This latest news comes as McKoon prepares for a special subcommittee hearing of the House Judiciary Committee on SB 129 taking place March 24. The committee is composed of four Democrats and four Republicans, plus committee chairman Rep. Wendell Willard (R-Sandy Springs).

Take note that although it doesn’t appear a vote will be taken at the hearing, the AJC reports that former Georgia attorney general Mike Bowers is expected to testify against the bill. For what it’s worth, Bowers and Willard are childhood friends as Bowers noted in a February 24 press conference, and Willard is a co-sponsor on lesbian state Rep. Karla Drenner’s (D-Avondale Estates) Fair Employment Practices Act. Although Drenner’s bill didn’t make it through Crossover Day, she says it’s not dead yet.

One of the factors leading to SB 129’s latest troubles include McKoon’s inability to make a convincing argument that the bill won’t be used to discriminate. The latest nod to that trend came from former state Rep. Edward Lindsey (R-Atlanta), who wrote a March 20 op-ed in the Peach Pundit calling on McKoon to include language that will keep the bill from permitting discrimination and child abuse.

The Augusta Chronicle’s editorial board came out against the bill on March 20, and most importantly, House Speaker David Ralston has been vocal about his concerns. It hasn’t helped McKoon’s case when leaders speaking out in favor of the bill, like Bishop Wellington Boone of The Father’s House, stand in the Capitol rotunda and say, “I know that LGBT is [sic] putting pressure on you. I know that their lobbyists are out there. Lobbyists? They are politicians! How can they put pressure on you when they don’t even know what gender they are? You gays won’t stand before God—how can we let you stand before us? You say that you have a civil rights struggle—that you are denied your rights. You say you go through the same thing as blacks? You’ve got another thing coming!”

McKoon pessimistic about his bill’s chances

McKoon, for one, is pessimistic about his bill’s chances, as he told the Marietta Daily Journal’s Ricky Leroux.

“Tuesday is the 35th legislative day, so it doesn’t leave us very much time to move the bill out of the subcommittee to the full committee, to (the) House Rules (Committee) and then to the floor,” he said.

We’re hearing similar thoughts from sources at the Capitol, who doubt the bill has enough time left in the session.

However, opponents of the bill haven’t backed down, as hundreds packed Liberty Plaza next door to the Capitol for a March 17 Georgia Unites Against Discrimination rally. Progressive and LGBT rights groups are calling out the business community for their silence on the issue and Georgia Equality continues to call on the bill’s opponents to contact their representatives. And it was just announced that a group of Georgia’s Jewish leaders will speak out against the bill at a Tuesday morning press conference at the Capitol in advance of the afternoon hearing.