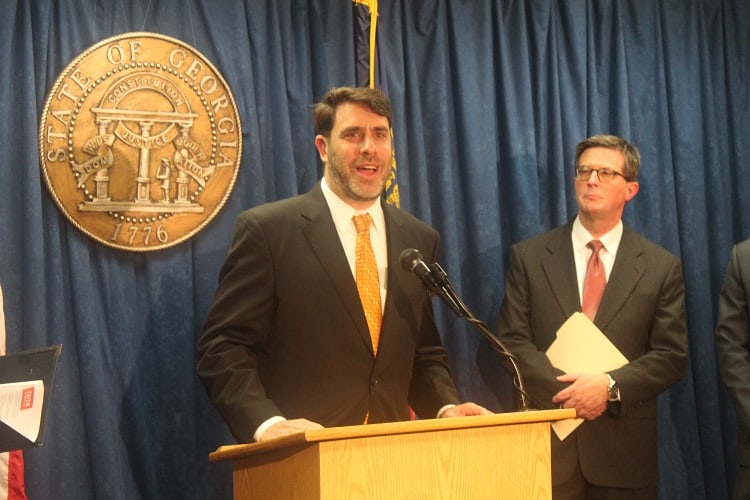 Religious leaders and a state senator came together Tuesday morning to denounce the so-called “religious freedom” bills being introduced in the state legislature.

“As faith leaders from diverse traditions, we believe freedom of religion is one of our most fundamental rights as Americans, but religious freedom does not give any of us the right to harm or exclude others,” reads a letter signed by a diverse group of dozens of clergy from around the state.

“No one asked the faith community if we wanted this bill,” Rabbi Peter Berg said at the press conference at the state Capitol. “Nobody asked the rabbis and the priests and the imams and the ministers about a religious freedom bill.”

Rep. Sam Teasley, a Republican representing Marietta, pre-filed HB 29 on Dec. 30. State Sen. Josh McKoon has yet to file his bill but has vowed to do so since both his and Teasley’s bills failed in last year’s session.

State Sen. Nan Orrock believes a national group is behind the proposal of such bills in Georgia and across the country, but did not specify one in particular.

“Whenever you see legislation cropping up like this in state after state, it’s an effort to create an impression that there’s a public demand for this bill, which is false,” she said. “It no doubt has some coordination and some collaboration.”

A rally is being held today at the Capitol by supporters of both Cochran and the “religious freedom” bills, which Sen. Orrock believes is misguided.

“There will be every effort made to cloud this discussion with [the Cochran] incident,” she said. “But that’s a personnel incident and that was a public servant who has people working under him and who issued opinions then did not honor the request of his employer.”

Rabbi Berg agreed, saying, “That was a decision made by the mayor. That issue is going to be raised up as a false example. I frankly don’t think one has any to do with the other.”

Gov. Nathan Deal, who was sworn in for his second term on Monday, told the AJC that he sides with his Republican colleagues.

“I personally do not think that the adoption of such a law would have the negative impacts that many people portrayed it would have,” he said. “The language of the proposal would probably ameliorate some of the concerns … I don’t think anyone who proposes that legislation or supports it supports it for the purpose of discrimination.”

The letter reads in full:

As clergy and civil rights leaders, we are concerned to hear that some elected Georgia officials plan to introduce a “Religious Freedom Restoration Act” (RFRA), a bill that could result in discrimination and have many unintended consequences.

As faith leaders from diverse traditions, we believe freedom of religion is one of our most fundamental rights as Americans, but religious freedom does not give any of us the right to harm or exclude others.

We oppose this proposed legislation. First, it would put an individual’s religious beliefs ahead of the common good. Second, it could unleash a wave of costly lawsuits that will add burdens to both the courts and taxpayers alike. Third, it is unnecessary because our freedom of religion is already guaranteed and protected by the U.S. Constitution and Georgia’s State Constitution. Fourth, a state RFRA could legalize discrimination by allowing businesses to refuse to serve customers based on religious objections.

We believe that businesses that are open to the public should be open to everyone on the same terms. We strongly oppose giving for-profit corporations religious rights that could allow them to discriminate against employees based on any characteristic — from their religious practices to their sexual orientation. This principle harkens back to the civil rights movement and our nation’s core values of equality and justice.

We all have different views on the issue of marriage for same-sex couples, but we are united in condemnation of discrimination and in firm support of equal protection under the law.

We caution our elected leaders against supporting this unnecessary RFRA, which opens wide the door for exclusion and division. Instead, they must preserve the current protections already afforded to us through the Constitution.