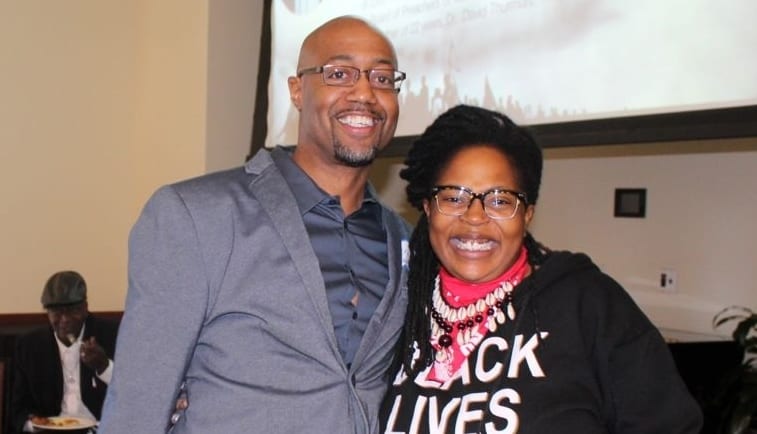 Black Lives Matter. Trans Lives Matter. Troubling rates of new HIV infections. There has perhaps never been as important a time for Atlanta’s African-American LGBT community to come together to share testimonials, frustrations, aspirations and goals than now, and that’s exactly what happened on Jan. 18 at the 15th Annual Rustin/Lorde Breakfast.

Hundreds packed into downtown Atlanta’s Loudermilk Center for the event, which was started in 2002 by activists Darlene Hudson and Craig Washington to celebrate Bayard Rustin and Audre Lorde’s contributions to the black LGBT movement while also celebrating Martin Luther King Jr. on the national holiday set aside to remember the civil rights icon. Rustin was a gay civil rights leader and chief organizer of the 1963 March on Washington for Jobs and Freedom while Lorde was a lesbian writer, poet and activist.

This year’s event managed to avoid the protest put on last year by members of Southerners On New Ground, who carried signs through the crowd to raise awareness about police brutality against black and brown people and to stress not only that Black Lives Matter but also that Black Trans Lives Matter and Black Queer Trans Womyn Matter.

But that didn’t mean those movements weren’t discussed or recognized, as the topics came up throughout the morning and several in the audience were spotted wearing Black Lives Matter hoodies.

A spoken word and vocal performance popped up during the event—literally. The spoken word performers would emerge from different areas of the room, their voices being heard by the crowd before being seen. Performers included Atlanta activist and HIV prevention counselor Anthony Antoine, author Antron Reshaud Olukayode and Larry Walker.

Antoine gave a fiery, passionate performance where talked about his journey as a black, gay man. Lorde and Rustin had a helping hand in the performance as well, with Antoine citing famous quotes from both, including Lorde’s “Our visions begin with our desires” and Rustin’s “We need in every community a group of angelic troublemakers. Our power is in our ability to make things unworkable.’”

Antoine’s performance climaxed with him finding his people and his will, saying, “Then, like a thunderous roar, an explosion occurs. Something gives. Either sink or swim and I want to live! I rise above this confusion turned anger turned rage turned violence turned pride. Self-pride. Giving praises to God who is no longer just your God but my God too. Giving praises to all my homosexual brothers and sisters who in many ways were my first love, who taught me how to really love. Giving praises to all of you, yes all of you that love and accept me, and yes I give praises to even those that hate and reject me. Why? Because all of you made me who I am today—strong.”

He ended by imploring those in attendance to speak up about their Pride, “Because there are broad shoulders upon which we stand. The blueprint has been laid.”

Monica Raye then closed out the performance by singing a soul-stirring rendition of Mahalia Jackson’s “Precious Lord.” It was a fitting moment considering the theme of this year’s breakfast, “Art Is Movement.”

Call to include everyone’s stories in community’s agenda

Social justice and HIV activist Devin Barrington-Ward followed up with a speech that also referenced and quoted black leaders throughout history, including abolitionist and civil rights activist Frederick Douglass and poet Lucille Clifton.

He noted the high number of murders of transgender women last year, then expanded the tent to salute all women in the community, saying, ““We owe it to our transgender sisters, femme-identified community members and our black cisgender women to acknowledge their resiliency, their struggle and the need for their political and policy demands to be uplifted, supported and valued in our political discourse and the overall agenda of the black LGBTQ community.”

He also talked about black, gay men and “the struggle of baring the unjust burden of the HIV epidemic,” saying the high number of infections has less to do with personal behavior and more to do with homelessness, unemployment, poverty, unjust incarceration and less access to healthcare and HIV treatment.

Black Lives Matter also came up, with Barrington-Ward saying everyone’s stories needed to be included in the community’s agenda.

“Our collective stories of struggle and resiliency are the core foundation for the larger discussion of the value of black lives. So when we are asking Bernie Sanders, Hillary Clinton, Jeb Bush and even Georgia’s own Governor Nathan Deal the value of black life to America, to Georgia and to Atlanta, we are asking those questions and making those demands with the overall narrative of all black life, because all black lives matter.”

The crowd then began to file out, with most headed for the King Day March, which included an LGBT contingent led by Rev. Duncan Teague.