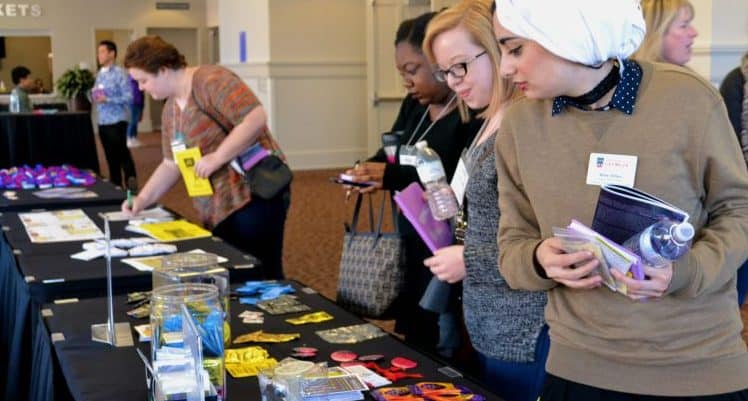 More than 200 LGBT students, faculty and allies joined together at the University of Georgia’s third annual Connect Conference this year, the largest the event has been.

Meg Evans, director of the UGA LGBT Resource Center, said it’s been exciting to see the conference grow, not just in the number of guests and topics, but in partnerships and buy-in from the greater UGA and Athens communities.

“It’s just grown and grown in a pretty remarkable time span and I think that’s a testament to the great work that our students are doing,” she said.

The conference’s theme this year was “Existence as Resilience,” inspiring attendees to focus on bettering all aspects of themselves as a way to thrive. The keynote speaker, Grace Nichols, took the conference title to heart in their speech.

“Our role is to be … present with ourselves, in connection with one another, so that we can find ways to move forward together as well,” Nichols said. “That takes being very real about, very intentional about, the difficult conditions in which we live.”

Nichols spoke about the importance of being intersectional, being transparent and recognizing privilege. They also said it was important to be intentional about creating from a place of power.

They said it’s vital to realize in this political climate, the “deep love that we need to express” isn’t a comic, lovey-dovey love, but rather a courageous love “that will call you out on your shit.” That type of love is more likely to lead to changes in policy.

“We thought Grace had just a really dope story to tell and would connect really, really well with our students and bring to light some identities that aren’t often centered. So we wanted to make sure that today was a space that those identities, and really Grace’s story, could be heard,” Evans said.

Before and after lunch, attendees could pick and choose talks focused on four tracks — heart, body, mind and soul. The topics were chosen based on proposals gathered last fall, Evans said.

Justin Landry, a UGA senior and member of the LGBT Resource Center’s ambassador program, was excited to hear different perspectives on sexuality and spirituality.

“I think I can learn a lot, get more familiarized with the queer community, because I just kind of came out,” Landry said. “What I just came from was ‘Queering Spirituality.’ I thought that was a little bit cool. A lot of times the clobber passages, that’s the source of a lot of peoples’ pain in the queer community. It’s interesting to get a queer perspective on spirituality.”

The Connect Conference started out as a program from Lambda Alliance, one of UGA’s student groups, but has always been open to individuals of all identities, Evans said.

“Right now, especially with the political climate we’re in, if the people who are actually within the LGBT community are the only ones doing the work, then that’s a lot of emotional labor on us,” said Nat Truszczynski, a UGA student who attended the conference. “If more people than just LGBT people come to these conferences, they really expand their horizons and learn what they can do to help us instead of us just serving ourselves and not seeing as much forward momentum.”