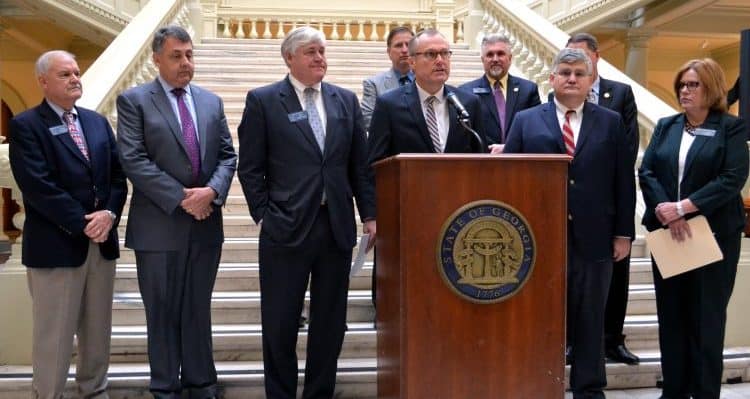 “We do believe it will be repealed and we’re taking that as a given,” said Sen. Renee Unterman (R-Buford). “Whether the whole thing is repealed or certain pieces, that’s a different question.”

Unterman is a member of the “Obamacare repeal and replace task force,” announced by Lt. Gov. Casey Cagle on Jan. 6.

Cagle said the group, officially known as the Health Care Reform Task Force, will look at ways “we can bring about a healthcare system that is more affordable and acceptable to individuals within our state.” In a news release, he clarified the group’s mission as identifying portions of state law that need to be changed and developing ways to increase access to healthcare.

“The task force won’t craft a new healthcare system,” said task force member Sen. Ben Watson (R-Savannah). “The task force, to me, is to study the situation and what will likely be coming, and get Georgia ready and prepared for that.”

Atlanta-based The Health Initiative has field agents on the ground, getting people enrolled in the marketplace while it’s still available. Executive director Linda Ellis said that’s because they believe plans secured now will stay in place through 2017.

“Our best hope is that in addition to all of the actions that we and folks who kind of think like us are doing … is there is a growing number of Republicans, both elected and not, who are quietly beginning to add their voices of concern to the conversation,” Ellis said. “Our hope is that as they get into this further, they’ll figure out that they can’t repeal it.” 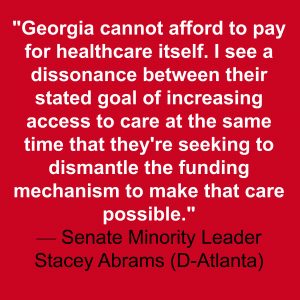 Senate Minority Leader Stacey Abrams (D-Atlanta) seemed wary of the task force and its intent on the day it was announced.

“My worry is less about the dismantling of healthcare at large, which of course is a danger, but it’s also what’s embedded in that, which is the idea that doctors should be able to pick their patients, and that terrifies me,” she said.

GOP leaders balked at the idea that individuals may be discriminated against because they are LGBT.

“We’re not about discriminating. We want to have everyone access to healthcare and we believe that we can do that,” Cagle told Georgia Voice following the Jan. 6 task force announcement. “If there’s fear around any community relative to discrimination, that should not exist.”

Watson, who has HIV-positive patients at his practice, said he thinks “some of those fears and anxieties are unwarranted.” He said HIV medications and treatment would remain covered; no one had brought up to him concerns about transgender identity and related medical procedures; and physicians would not be able to select patients based on personal beliefs.

Unterman, who founded AID Gwinnett and says she makes HIV funding a priority in her Senate healthcare committee, echoed Watson’s statements, but said a related concern is the cost of medication.

“All the medication [in general] is going up at an inflationary cost. It’s exorbitant. You can reign in the healthcare costs, but if the pharmacy doesn’t follow suit, it doesn’t do any good to go to the doctor,” she said. “That, I don’t know what’s going to happen. That would have to be regulated in Washington.”

What’s ‘wrong’ in the first place?

Unterman, a nurse by trade, said ACA has been a “total disaster.”

“There is no access. ‘I can’t afford it; how do I get my prescriptions; I can’t pay my insurance premium.’ To me the whole thing has had a significant effect on the economy of the US and the GNP,” she said.

Watson said in Savannah, there are only two companies offering policies through ACA. One does not have providers in the county.

“I have patients that are affected; that have their insurance through the exchanges,” Watson said. “When I go to the hospital, I see patients that don’t have insurance, so I think it’s important for us as a society to address healthcare.”

Ellis said they’ve seen those same challenges, but believes the answer is tweaking, not repeal-and-replace. One tweak she’d like to see is making the marketplace more appealing to insurers.

Though neither senator would share with Georgia Voice exactly what they thought a new healthcare system might look like, Watson did say he believes President Donald Trump will keep the promises he made “within a week of the election.”

“He said that he was not going to do away with preexisting illnesses. He’s going to allow children, young adults to stay on their parents’ policy up to the age of 26,” Watson said.

“The Affordable Care Act is not perfect and because both sides couldn’t come together and acknowledge that this was a good enough first step, there hasn’t been a way to make those tweaks,” Ellis said. “My hope in those larger conversations is that they would be open to tweaks that need to happen to make this good start better, and that’s going to require putting partisan politics aside.”