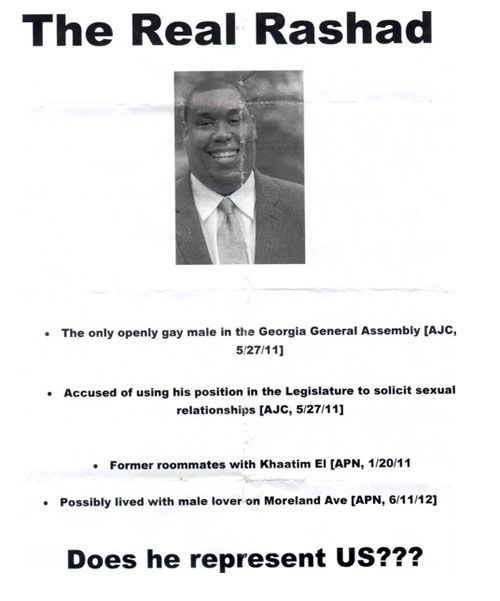 Taylor is facing Pat Gardner (D-Atlanta), who is straight but has been supportive of LGBT issues during her 11 years in the legislature, for re-election in the newly redrawn District 57. The two LGBT-friendly candidates were pitted against each other during the Republicans redrawing of districts.

“This could be the most homophobic race in a long time,” Taylor said Monday.

Taylor said recent stories on the Atlanta Progressive News website have painted him in a false light and also accused him of not living in the district he represents. Taylor denied the accusations.

A Pat Gardner advertisement appears at the top of the APN website’s homepage, Taylor noted.

An anti-gay flyer he said his volunteers and staff found in neighborhoods this past weekend prompted him to speak out publicly on the issue.

Taylor said he has not talked to Gardner but planned to write her Monday evening and ask her to speak out against what he believes is homophobic campaigning by her supporters.

“There are only two people in this race. I don’t think Pat Gardner is behind it and I believe if she knew about it she would condemn it,” Taylor said. “But there are people supporting her perhaps working under the table.”

“At the end of the day, there are two candidates with strong LGBT records and this is no way a race should be run,” Taylor added. “This shouldn’t be a dirty race. I want [Gardner] to stand up and say this is not the kind of race she is going to run.”

A phone call to Gardner this evening was not immediately returned.

Georgia Equality, the state’s largest LGBT advocacy organization, has not yet endorsed in this race. Both Gardner and Taylor have been endorsed by Georgia Equality in the past when they represented different districts.

Taylor has received an endorsement from the National Gay & Lesbian Victory Fund, an organization that works to elect LGBT candidates to public office.

Taylor became the first openly gay man to serve in the Georgia House of Representatives after he was forced out when the ex-boyfriend of his current partner sent out emails to legislators alleging he is gay and also accusing him of misusing his office.

UPDATE: Matthew Cardinale, editor of Atlanta Progressive News, said he has not accused Taylor of not living in his district. He said he has questioned Taylor’s high number of addresses, concerns raised by constituents who cannot determine where he lives, the use of a P.O. Box number in campaign and qualifying materials and discrpencies in voter files and statements made to APN about where he lives.