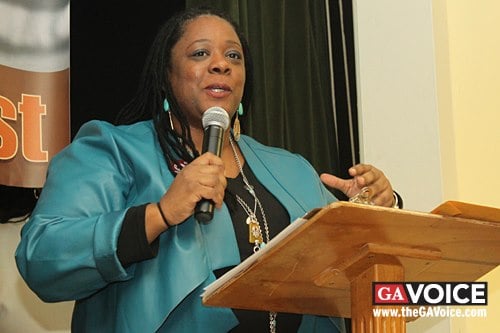 Bell, one of three lesbians in the Georgia legislature and is seeking reelection in 2014, defeated Long, who was an incumbent in the state House, in 2012 after the Republican majority redistricted to the two into the same district.

Long expressed disappointment when Georgia Equality endorsed Bell in 2012, saying at the time, “I’ve never voted to discriminate against anyone. My feelings are hurt [about the endorsement]. The LGBT community has some straight allies and if we want equality we have to want equality for all. Having a straight candidate that represents their issues gives constituents a larger plate at the table,” he said. “I’ve had doors closed in my face because I’m not gay.”

UPDATE: Long told the GA Voice he did tell Bell he would run against her for the state District 58 seat if she supported his opponent, Brenda Muhammad, for the new office of District 5 of the Fulton County Commission. He said he has a copy of a flyer in which Bell is named as a member of the host committee for Muhammad which prompted him to confront her on the House floor.

It costs $400 to quality for a state seat and $1,000 to qualify for a county seat, he added. And because he hasn’t yet qualified for the Fulton seat and he has until Friday to qualify for both seats, he said he may choose to run for the state House seat he once held.

The 2012 campaign between Long and Bell was a bruising campaign and Long said he feels Bell is still campaigning against him by supporting Muhammad.

“I’m damned if I do, damned if I don’t,” he said. “I haven’t done anything to her. I don’t know why she is doing this. But if she is going to do this I might as well run for state representative again. I’m ready to put gay marriage on the table and fight for the LGBT community. Maybe she’s insecure because she hasn’t been below I-20 since she was elected.”

Bell worked hard to defeat the anti-gay “religious freedom” bill in the House this session, including an emotional plea to the Judiciary Subcommittee and the bill’s sponsor to not move forward with the bill. Both the Senate and House bills did not survive this session.

@ralphlongiii if you call,show up at my job, make a threat,I ask you if you are threatening me you say ‘YES” then expect action @dyanabagby

@simonebellhd58 @dyanabagby you don’t answer your phone for anyone not even my former constituents. You have not been on the South Side.

SECOND UPDATE: Bell told the GA Voice that got a phone call from Long while in the Chamber today but she did not answer it. Later, she saw  him walking around House floor. Because this week is qualifying for candidates (Bell qualified for reelection on Monday) there was some rumblings about why was Long, a former state representative, there.

After talking to other lawmakers, Long approached Bell’s side of the House floor and she approached him to ask what he wanted to talk about because she was unable to answer his phone call.

“He said, ‘I saw a fundraiser flyer for Brenda Muhammad with your name on it.’  I thought, OK, I  didn’t tell her she could use my name, but … . And then he said,  ‘I want you to make public statement that you are not getting involved in this race race,’ ” Bell explained. “I told him I would not do that and that’s when he said he would pay the $400 to run against me because it’s cheaper than running for Fulton Commission.”

“I said, ‘Are you threatening me?’ And by this time he’s in my face more. He said, ‘Yes.’ I went to my chair and he just stood there with a sinister look on  his face. So I went to get the state patrol,” Bell said.

House Minority Leader Stacey Abrams saw Bell approach the officers and asked Bell what was happening. Bell said she told Abrams about Long, who was still standing at the back of the House Chamber, and him threatening her. Abrams then intervened and the state Sergeant at Arms was called in. Long then left before any other confrontations took place, she said.

“And that’s when I took to my Facebook page. You don’t go to people’s jobs and threaten them,” Bell said. “I asked him if he was threatening me because he was exhibiting threatening behavior.

“And he has a history of this. It’s something I heard on the campaign trail [in 2012] from all across the district — that he was intimidating to people. That he was even intimidating to women, and men, when he was at the Capitol. The problem now is I took it public because this needs to stop,” she said.

When asked if she was supporting Muhammad in the Fulton Commission race, Bell hesitated for a moment and then answered, “Yes.”

“If I have to choose between her and Ralph Long … and I prefer to stay out of races … but having the experiences I’ve had with him and situations like this, I don’t see him being good for our district,” she said.