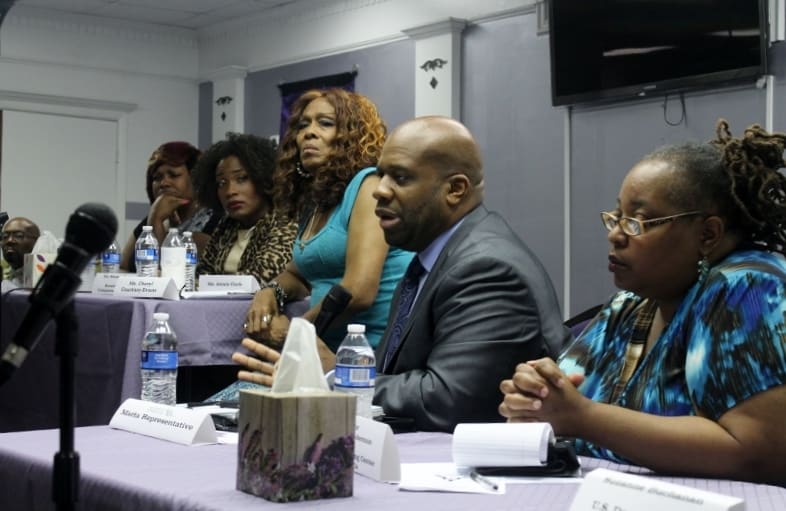 Panelists at the June 4 town hall on the beating of two trans women on a MARTA train. (photo by Patrick Saunders)

MARTA representatives were out in full force, including Deputy Police Chief Joseph Dorsey, Executive Director of MARTA’s Office of Diversity and Equal Opportunity Ferdinand Risco and others. There was also a representative from the U.S. Department of Justice’s Community Relations Service, along with Joan Garner of the Fulton County Commission and several transgender and cisgender activists and religious leaders.

It was deemed a “conversation about solutions and not punishment,” as Pastor Sonya Williams of Restoration Inclusive Ministries (RIM) told the audience in her introduction.

But punishment did come up, as Cheryl Courtney-Evans, founder and executive director of Transgender Individuals Living Their Truth (TILTT), asked the MARTA representatives in attendance if and when the charges for the two suspects would be upgraded from disorderly conduct to assault.

Risco told the assembled crowd that every one of MARTA’s 4,529 employees is required to have diversity and sensitivity training, but acknowledged that MARTA has more to learn about the trans community.

“There are some nuances for particular communities and demographics, and some of them we need to learn,” he said. “We are asking for your help. We are asking for those core competencies so that we can ensure that you are cared for like you need to be.”

Risco also noted that on average, MARTA puts a police officer on one out of every three trains, and that conversations have begun about filling the vacancy for MARTA’s LGBT liaison position “with someone who knows and understands the plight of the community.” LGBT community members are being consulted about who to fill the position, and GA Voice has reached out to MARTA to specify a timetable for when that position will be filled.

Passions were high throughout the night, as an unnamed attendee interrupted the town hall midway through, cutting off Pastor April Freeman of RIM, who was moderating the event. She criticized the panel for talking about sensitivity training and for talking about the way the victims were dressed, and also said much more would have been done if the victims were white. Panelists called on her to stay, but she stormed out.

The evening wrapped up with a discussion on solutions, and many called for additional meetings to keep the dialogue going. There was also a call for people to speak up when they hear someone being transphobic.

“We have to go where people are. People are not coming to us,” said Rev. Maressa Pendermon, a community advocate and activist. “Some of those thugs are my nephews, to be honest. Some of those thugs are my cousins and they show up talking crazy in front of me sometimes. And I have to say, ‘Let me tell you something, that is not okay. Let me tell you why that’s not okay.’ We have to do that.”

Simaya Fogle, a transgender sensitivity and competence trainer, said that new MARTA policies should be put in place in addition to the sensitivity training.

“Training needs to be coupled with teeth,” she said. “Otherwise we’re just talking.”

And Courtney-Evans had an eye on the upcoming trial.

“I would like to see a full courthouse every appearance,” she said. “To see justice done for the victims of this incident.”

A first town hall meeting was held Tuesday at the Phillip Rush Center and hosted by the Solutions Not Punishment grassroots organization. Read the report on that town hall by WABE by clicking here.