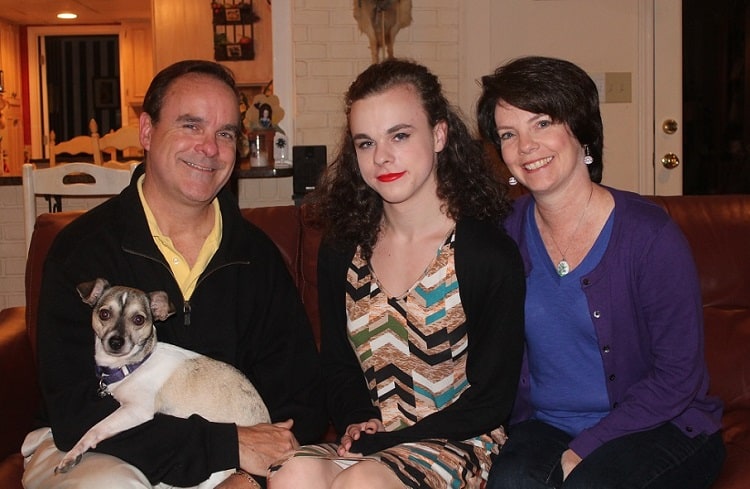 Coming out tends to stop fazing someone after they’ve done it three times. That’s what happened for Sage Lovell, a 16-year-old junior at Walton High School in East Cobb County.

“Eventually I got to the point where I was like, ‘This is nice, but it’s not me.’ By the end of sophomore year I was just like, ‘I am a female and that’s how I want to be seen and I am good with that.’”

It’s that kind of strength and conviction that inspired Sage Lovell’s fellow students to name her to Walton’s homecoming court, making her the first known transgender person to do so in Georgia.

Her parents, who supported her coming out as gay, were equally supportive when she came out as transgender, but they needed schooling.

“It was never a surprise that Sage was gay; I knew that from an early age,” says her mother, Maureen Lovell. “But I didn’t really understand what transgender was. Sage has been the one that’s really educated me through this process, so it’s been a growing experience for all of us. But looking back now, it totally makes sense—I just didn’t know the word for it.”

Maureen Lovell admits it wasn’t easy at first because the whole family had to “transition to what was real” as she says, but that it brought the family closer together.

Her father, Scott Lovell, notes the environment that Sage has done this in, imagining what it’s like for other young LGBT people like her.

“They’re scared to come out because they know they’re in the South and they know they’re in a very conservative community and they’re not sure how people are going to react,” he says. “And Sage took the bull by the horns and said, ‘I don’t really care how everybody reacts,’ and for someone to be that strong, you can’t help but support them.”

Fortunately for their daughter, the framework was in place for her at school; Walton has a strong anti-bullying policy as well as gender-neutral restrooms. And she was lucky to have the support of her friends and fellow students.

“They were like, ‘That’s cool, nothing else has changed except your pronouns and name,’” she says. “It’s phenomenal, I’m so blessed,” she says.

She was happy enough to make it onto the ballot with 49 other juniors for their class’s homecoming court, but got a surprise while sitting in homeroom one day, as members of the student government came in saying they had an announcement.

“They started giving this spiel about homecoming and then they were like, ‘And it’s Sage!’ and the whole class kind of exploded. It was loud,” she says, laughing.

Soon enough, the Marietta Daily Journal heard about what happened and interviewed the family. When the article came out, Maureen Lovell scrolled down to look at the comments once—and that was the last time she did that.

“Everybody has a right to their own opinion, but I don’t need to take that in,” she says. “It says more about the person making the comment.”

Sage Lovell adds, “Granted, it’s a dumb opinion, but you have a right to it.”

GLAAD reached out after the article appeared and offered to assist the family in dealing with the press coverage, and they eagerly accepted. Overall, they are happy with how the media has portrayed them.

“I’m glad I got my story out and other people could see what’s happening and see that it is a positive thing,” she says. “It’s good for all trans people to see that trans is not limiting anything.”

And the crowd goes wild

Media attention aside, Sage Lovell had a homecoming court to get ready for, and first on her mind was finding a dress she liked and that the other girls weren’t wearing.

The school had a pep rally during the school day, and afterward the girls piled into the back of Scott Lovell’s convertible for the homecoming parade. Then it was back home to get ready for the homecoming game. The court would be presented at halftime.

“When they called my name, the crowd erupted in cheers,” she says. “Everybody wanted my picture. Even little middle school girls who had never seen me before.”

The day’s events affirmed the decision to support his daughter, says Scott Lovell, who escorted his daughter across the football field.

“The point when I realized that she was willing to stand up on a football field in front of her entire high school and everyone she knew and was friends with and say, ‘This is who I am,’ I said, ‘Well, then that’s who you are,’ he says. “I can’t second guess that.”

‘I want to show people that it’s okay’

After homecoming, it’s back to being a 16-year-old for Sage Lovell, which for her means playing violin in the orchestra, indulging her love of art, music and fashion and looking into colleges to apply to.

“I’m trying to find a college with trans-friendly housing,” she says.

She idolizes transgender actress and activist Laverne Cox and hopes to look more into transgender advocacy as she enters college. There are two other transgender girls at Walton whom she is assisting as they figure out their path to coming out.

“I want to show people that it’s okay. I want to be there for other trans people.”