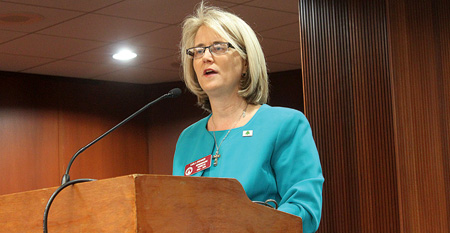 Drenner told GA Voice it is the first resolution she has passed with the words “gay” and “LGBT” in it since she took office in 2001.

“It is a small victory of sorts,” she said, quipping that “ many thought it was a gateway bill to same-sex marriage.”

Yesterday was the final day of the annual legislative session. It was the typical marathon of last-minute activity as lawmakers tried to move pet projects.

2013 proved to be a relatively quiet but still useful session on LGBT issues, according to Jeff Graham, executive director of Georgia Equality, the statewide gay political group.

“Obviously, the legislature continues to struggle with how to address issues of concern to Georgia’s LGBT community,” Graham said.

“There were a number of bills introduced that would extend employment protections, provide a safer environment in schools and address hate crimes,” Graham said. “Hearings were held on two of those bills (HB 427 and HB 429).

“While neither bill moved from committee, this is also the first time that we have had two hearings on pro-LGBT bills during the same session,” he said.

HB 427, sponsored by Drenner, has been dubbed the Fair Employment Practices Act. Introduced originally in 2011 and back this year with 67 co-sponsors (including 11 Republicans and one independent), it would prevent state employees from being discriminated against based on sexual orientation and gender identity.

The bill received an informational hearing March 21 before a subcommittee of the House Industry and Labor Committee. No vote was taken, but Drenner offered an impassioned appeal to patriotism to urge her colleagues to advance the measure.

“I am a loyal American and I believe wholeheartedly in liberty and justice for all,” Drenner said at the hearing.

Waites, a co-sponsor of the bill, told lawmakers it is “very personal” for her.

“I’m simply here to ask you as a member and colleague to support this legislation,” she said. “We don’t ask you to condone a lifestyle. But fire someone because they are incompetent, because of absenteeism. Not because you don’t agree with their personal decisions in life.”

Waites testified at the Fair Employment Practices Act hearing a day after speaking at a hearing for her own HB 429, which would improve reporting of school bullying. The bill does not specifically address sexual orientation, but LGBT students are disproportionately bullied at school.

The March 20 hearing before a House Education subcommittee drew questions but no vote.

“It is my belief that unhealthy children become unhealthy adults,” Waites told the subcommittee. “When it’s harassment based on sex or race, we can do something about that. But when it comes to other issues, such as obesity, sexual orientation, there is no law or state policy that protects our students.”

Because 2013 was the start of the Georgia General Assembly’s two-year cycle, bills that were introduced this year will remain pending for the 2014 session. This year’s hearings will be important for next year, according to Georgia Equality’s Graham.

“While we did not have action, we are in a position that is stronger than the past as we head into next year,” he said. “That gives us several months to work with our supporters to have the one-on-one meetings with their legislators that are most effective in gaining support.”

Noted Graham, “it sets a good stage to have these conversations over the summer so we can take quick action in January.”

When Georgia lawmakers reconvene in 2014, these LGBT bills introduced this year will be among those awaiting them:

Similar to HB 119, these hate crime measures were prefiled in late 2012 but saw no action in the 2013 session.

Also sponsored by openly gay Reps. Keisha Waites and Simone Bell, this bill would amend Georgia’s previous hate crime law — which was ruled unconstitutionally vague by the State Supreme Court — to replace the crimes based on “bias or prejudice” with specific categories of “the victim’s race, religion, gender, gender identity, sexual orientation, disability, or national origin.”

Sponsored by Georgia’s first openly gay state lawmaker, HB 427 would prohibit employment discrimination against state employees (not employees of private companies) based on sexual orientation, which the bill defines to include gender identity.

Status: Received a second reading Feb. 26, but no further action

This bill would change rules governing student scholarship organizations that allow taxpayers to earmark part of their state taxes to fund private school scholarships. It would specify that eligible schools can’t  discriminate in hiring or admissions based on a number of categories, including sexual orientation and gender identity.