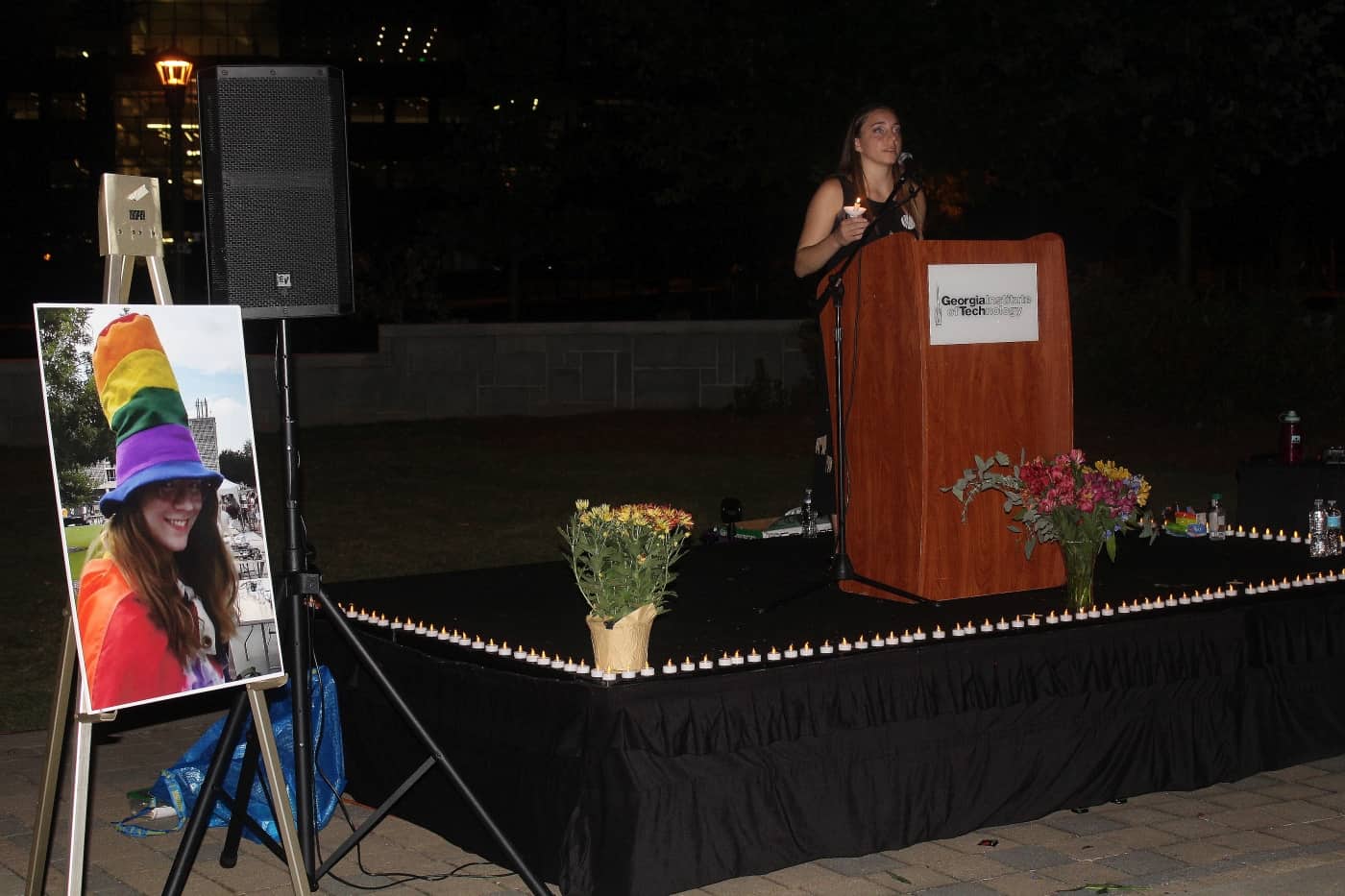 The night began peacefully, with several hundred mourners taking part in the candlelight vigil for Schultz, who was killed by Georgia Tech police Saturday night after carrying a multipurpose tool and walking toward a handful of officers while asking them to shoot. Questions arose in the days after the incident as to why the officers weren’t equipped with less lethal weapons like tasers or stun guns.

Following the vigil, one of the mourners emerged from the audience, filled with emotion as they assailed the school and President Bud Peterson for not providing adequate mental healthcare services or access to transgender housing. When others in the audience criticized Georgia Tech police, the first speaker shouted them down.

The speaker also criticized the media for misgendering Schultz, who identifed as gender non-binary, bisexual and intersex and used they/them/their pronouns.

Shortly after, about 50 students left the vigil and began to march toward Tech police headquarters, a moment captured in video posted to Reddit (NSFW language).

GTENS ALERT: Stay inside due to violent protests on campus. Avoid Hemphill Avenue. Stay inside until told otherwise.

One Twitter user caught some of the violence on video.

The university tweeted out an all clear at around 11 p.m.

GTENS All Clear. At this time the campus has been cleared of any threats. You may resume normal activities.

The incident led to two police officers receiving minor injuries and one of them being transported to Grady Memorial Hospital, according to the AJC.

Three people were arrested and charged with inciting a riot and battery of an officer, and it’s not immediately clear if the three – identified as Vincent Castillenti, Jacob Wilson, and Cassandra Monden – were Tech students.

“We ask that those who wish to protest Scout’s death do so peacefully. Answering violence with violence is not the answer. Our goal is to work diligently to make positive change at Georgia Tech in an effort to ensure a safer campus for all students,” they said. “This is how we will truly honor Scout’s life and legacy.”

The shooting of Scout Schultz was entirely avoidable. Campus police are equipped with pepper spray and should have employed this nonlethal method rather than opting to use deadly force. I expect a comprehensive independent review of this incident.

I condemn the violent actions taken by a handful of individuals of unknown affiliation. Atlanta has a rich history as a center for nonviolent civil disobedience and I believe that following in this tradition of peaceful protest and organizing is the most effective way to achieve the important goal of raising awareness of and putting an end to police killings.

That said, it is absolutely essential for us to realize that the vast majority of demonstrators were being peaceful. The community is faced with genuine grievances and they have a right to assemble and make their voices heard. To focus solely on the actions of lone agitators, many of whom did not appear to be part of the student body, masks the very real grief that the community is experiencing. Let’s not lose sight of the issue at hand, which is the unnecessary killing of a student by campus police. My condolences go out to the family and friends of Scout Schultz.