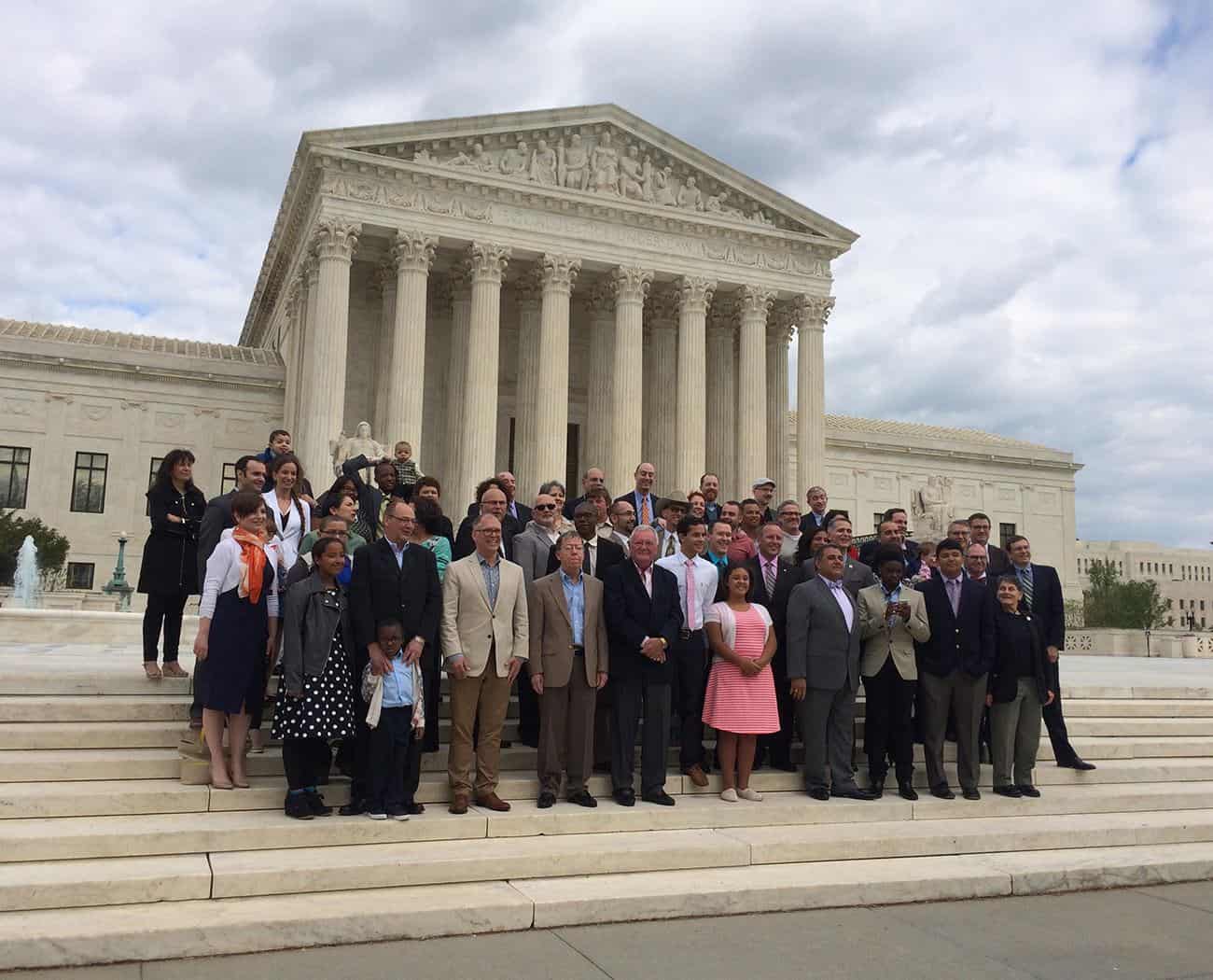 Oral arguments on same-sex marriage are taking place today at the U.S. Supreme Court with a decision likely in June. Georgia is one of the remaining states where same-sex marriage is banned via a constitutional amendment. A lawsuit was brought against the state last year, on April 22, by Lambda Legal representing nine plaintiffs with one goal in mind—overturning the state’s prohibition of same-sex marriage.

A year of court filings and non-decisions led to Lambda Legal agreeing to wait until after the U.S. Supreme Court rules on marriage equality before it decides what to do with its case. With Gov. Nathan Deal and Attorney General Sam Olens as well as the state’s probate clerks apparently on board to abide by what the Supreme Court rules, it appears same-sex marriage is coming to Georgia as soon as this summer.

Today, the Supreme Court is deciding on two questions:

1.) Does the 14th Amendment of the U.S. Constitution require a state to license a marriage between two people of the same sex?

2.) Does the 14th Amendment require a state to recognize a marriage between two people of the same sex when their marriage was lawfully licensed and performed out-of-state?

Beth Littrell, attorney with Lambda Legal representing the Georgia plaintiffs, said today that if the Supreme Court rules in favor of Question 1—that same-sex marriages are indued constitutional—then Lambda Legal would immediately file for judgment in its case. And, if Attorney General Olens means what he says, that judgment in favor of Lambda Legal should be easily granted.

“The ruling in favor of the first question means that bans in place now are unconstitutional. It doesn’t necessarily mean people can marry immediately, but it could if officials understood resistance is futile. It would be at least a very short amount of time before people could start getting married,” Littrell explained. “We’re hoping Georgia will be enlightened and will let love rule.”

Deal and Olens speaking out publicly that they will respect the Supreme Court’s ruling is an “encouraging sign,” Littrell added.

“Whether that means they will issue a direct that probate judges start issuing licenses or that they won’t argue zealously in court, we don’t know. What it means is unclear, but is a good indication that they will lay down their arms and allow couples to marry.”

With Question 2, Littrell says she just doesn’t expect the Supreme Court to rule that states that don’t have marriage equality will be forced to accept marriages from those married in other states where marriage is legal.

“It’s difficult to imagine what the justification would be to do so,” she said. Doing so [ruling in favor of Question 2, and against Question, 1] would lead to discriminating against some, she explained. “It’s difficult as a constitutional lawyer to understand how the court would make that distinction, to say yes to one and no on the other,” she said.

“But the court will do what it will do,” she added.

If the Supreme Court rules in favor of Question 2, but not Question 1, that means the constitution will treat couples differently based on economics, mobility and age, for example, where traveling to another state to legally marry is not easy. And this ruling would undoubtedly lead to more lawsuits, Littrell said.

That ruling would also lead many couples to travel to other states to get married, legally, and then move back home. But by doing so, the Supreme Court would be treating some couples in a way that disparages their marriages and would create all kinds of problems, and more legal battles, Littrell said.

Of course, nothing will be known until, most likely, the end of June. And it will not be what the Supreme Court says, but how it says it, in terms of what will happen to Georgia’s case, she explained.

But public opinion on marriage equality and against LGBT discrimination has shifted dramatically in just the past month or so, Littrell said. “You can see by the backlash in Indiana that the folks who are standing on the side of discrimination more and more are standing alone and don’t have the backing of the American people.

“There is something historic in the air today.”

• 61 percent of Americans support the freedom to marry, according to a Washington Post/ABC poll released last week.

In Georgia, supporters of same-sex marriage outnumbered opponents, 48 percent to 43 percent, according to a 2013 Atlanta Journal-Constitution poll.

“For too long, tens of thousands of Georgians have been denied essential civil rights based solely on whom they love. Our state has gazed just across state lines for years as our neighbors in Florida, Alabama, and elsewhere have been afforded liberties that should be enjoyed by the LGBT community right here at home. Georgia Democrats have been outspoken in their support of equality for all families, yet Republicans have, at best, been silent on the issue—and at worst, propagated an environment of discrimination, hate, and fear,” he said.

“I, and many others, hold hope that the Supreme Court will decide in favor of equality, opportunity and progress. We are witnessing the shaping of a better nation. And I’m proud that the leadership of the Democratic Party of Georgia is on the right side of history.”