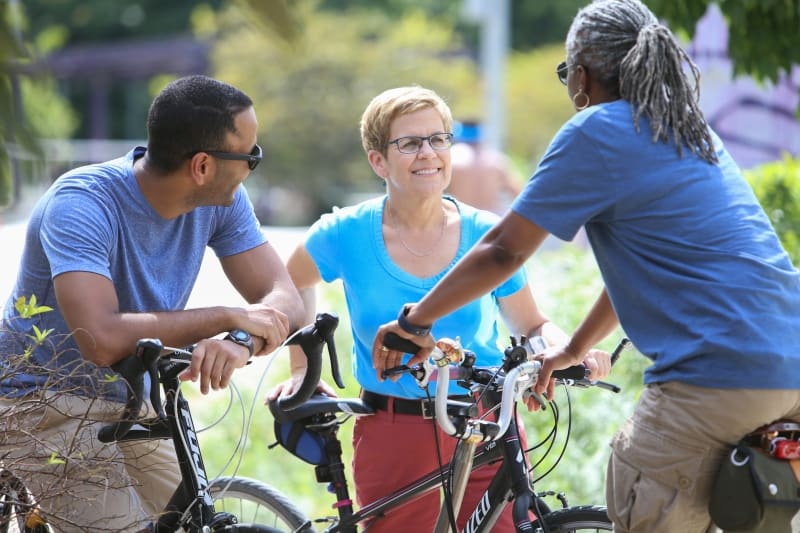 Cathy Woolard is used to being first and she intends to keep it that way. She was the first candidate to declare in the upcoming Atlanta mayoral race, the first openly gay official in Georgia history when elected to the Atlanta City Council in 1997, and the first woman to serve as Council president when elected in 2002. If she prevails among an already crowded field of candidates in the 2017 election, Woolard would become the first openly LGBT mayor of Atlanta. Only two other major cities in the country, Houston and Portland, have elected openly LGBT mayors.

“Following in the footsteps of great Atlanta mayors who also broke a glass ceiling, including Maynard Jackson, the first African-American mayor, and Shirley Franklin, the first female mayor, would be a great honor,”said Woolard. “This is what makes Atlanta not only one of the great cities in America, but throughout the world. It is important to show future generations that anything is possible, regardless of the color of your skin, whether you are male or female, or even your sexual orientation.”

Woolard’s list of LGBT accomplishments is extensive (see sidebar) and she has not slowed down since she began her activism with the Atlanta Committee for the National March on Washington in 1987. Most recently, Woolard could be seen daily at the state Capitol where she lobbied against House Bill 757, the anti-LGBT so-called “religious freedom” bill, for Georgia Equality. Governor Deal vetoed the bill in May.

“Cathy Woolard has spent much of her life leading the fight for LGBT equality around the country and in Georgia, going back to the 1980s,” said Jeff Graham, executive director of Georgia Equality. “The progress we enjoy today really rests on the shoulders of champions like Cathy. LGBT people would not have civil rights protections in Atlanta if it weren’t for her. We couldn’t have defeated all of the anti-gay legislation in the Capitol in recent years if it weren’t for Cathy. She has been, and continues to be, a remarkable leader for our community.”

Woolard’s activism, and ability to get things done, extends beyond LGBT causes. An Atlanta native and UGA graduate, her concern for the city has been most clearly demonstrated by her proposal and championship of the Atlanta BeltLine. While president of the council, she held dozens of neighborhood meetings to get residents’ input and secured funding for the now internationally recognized urban renewal project. Ryan Gravel, whose masters thesis written at Georgia Tech served as the model for the project, credits Woolard with its success.

“We wouldn’t be doing it without Cathy,” Gravel said. “She saw the vision; she understood it intuitively. She understood communities and the role they would play in the implementation of the project. Not only did she understand it and how to do it, she believed in Atlanta and was willing to commit her staff and time to do it.”

A recent article in the New York Times underscored the popularity and significance of the BeltLine, calling it “a staggeringly ambitious engine of urban revitalization” and “the most important rail-transit project that’s been proposed in the country, possibly in the world.” The newspaper also used a quote from Woolard’s campaign website which promises “If you like the BeltLine now, you’re going to love it when I am your mayor.”

The Gay and Lesbian Victory Fund, whose mission is to elect openly LGBT officials, has already endorsed Woolard’s candidacy, citing its historical and practical significance. As many southern states attempt to strip its LGBT citizens of hard-won rights, with a gay mayor, Atlanta can stand as a leader in civil rights as it has for decades.

“Cathy Woolard’s race for mayor of Atlanta is one of the most exciting and important in the country for LGBT equality,” said Martine Apopca, vice president of political operations and communications for the Victory Fund. “We endorsed Cathy more than a year before her election because of her visionary leadership on the City Council and because her candidacy represents an important step toward a more inclusive South – where LGBT elected officials are severely underrepresented. Cathy has proven before and will prove again that the right candidate with the right message can win anywhere.”

Woolard will take to the streets for Pride, something she has done for decades.

“I’ve been walking in the Atlanta Pride Parade since the early 1980s,” Woolard said. “I look forward to it every year, and none more than 2016. Pride is a great way to for us to come together and demonstrate solidarity and equality, to listen to others on how to improve our neighborhood, our city and our state.”

If you are a Woolard fan, and looking for a group to walk with in the Pride Parade, the campaign has extended an invitation to walk with them on its Facebook page, www.cathyforatlanta.com.