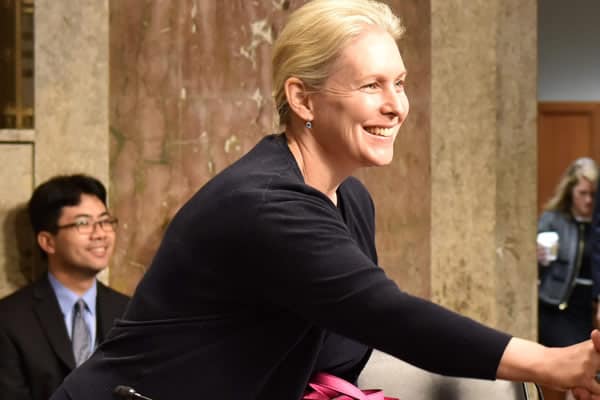 In the aftermath of orders from the U.S. Supreme Court allowing the President Trump’s transgender military ban to go into effect, Sen. Kirsten Gillibrand (D-N.Y.) has vowed to introduce updated legislation to ensure transgender people can serve and enlist in the U.S. armed forces.

Gillibrand, a 2020 Democratic presidential candidate, said Tuesday she’d introduced the legislation in the U.S. Senate, recalling an earlier version of legislation she introduced with the late Sen. John McCain.

“I strongly disagree with the Supreme Court’s decision to allow this discriminatory ban to take effect, and I will continue to do everything I can to reverse this hateful policy,” Gillibrand said. “I was proud to introduce bipartisan legislation with the late Sen. John McCain to protect our currently serving transgender service members and ensure that they can continue to do their jobs and serve with dignity. New transgender recruits have joined our military since then, and I will be introducing an updated version of the bill that will also ensure that any transgender American who meets the standards can sign up to join our armed forces.”

In her statement, Gillibrand commended transgender people for serving in the armed forces and said Trump’s ban is unnecessary.

“Transgender service members have been serving in our military with honor and distinction” Gillibrand said. “They are willing to die for this country, they make extraordinary sacrifices for our freedom, and they are unafraid to fight for our most sacred values as Americans. Banning them from military service is a rebuke of their patriotism, it undermines our military readiness, and it goes against the congressional testimony of the heads of the Army, Navy, Air Force, Marine Corps and Coast Guard, who each confirmed that transgender service members are serving in our military without any problems.”

After Trump announced in 2017 he’d refuse to allow transgender people in the military “in any capacity,” Gillibrand introduced with McCain legislation seeking to codify an ongoing review at the Pentagon on transgender service and prevent Trump from interfering with it.

That bill, however, was focused on retention of transgender service members currently in the military as the Pentagon review was ongoing.

The policy former Defense Secretary James Mattis ended up developing as a result of the review is now out. It allows transgender people currently in the armed forces to remain — consistent with Gillibrand’s old bill — but bars new transgender enlistments. Any legislation Gillibrand would introduce now would have to be different and focus on enlistment.

Any such legislation would face a significant uphill climbed in a Senate where Republicans gained seats after the 2018 election. The new Senate Armed Services Committee chair, James Inhofe (R-Okla.), has already pledged legislation that would codify Trump’s transgender military ban.

It remains to be seen whether any Republicans will join Gillibrand in co-sponsorship in the aftermath of McCain’s passing. Other Republicans, including Sen. John Ernst (R-Iowa), have indicated they support allowing transgender people in the military, but they may stop short of co-sponsoring the bill.

In the House, legislative action to ensure openly transgender military service has greater prospects under the new Democratic majority. It remains to be seen what action the House will take in the aftermath of the Supreme Court orders.

Mara Keisling, executive director of the National Center for Transgender Equality, told the Washington Blade she’d like to see a House resolution against the transgender military ban in the aftermath of the orders from the Supreme Court.

“I am extremely disappointed in the Supreme Court’s decision to allow the Trump administration to enforce its discriminatory ban on transgender military service without proper due process in the courts,” Smith said. “Anyone who is qualified and willing should be allowed to serve their country openly, without their career being affected by an arbitrary, discriminatory directive from the president. We have fought against this bigoted policy at every step, and we will continue to do so.”