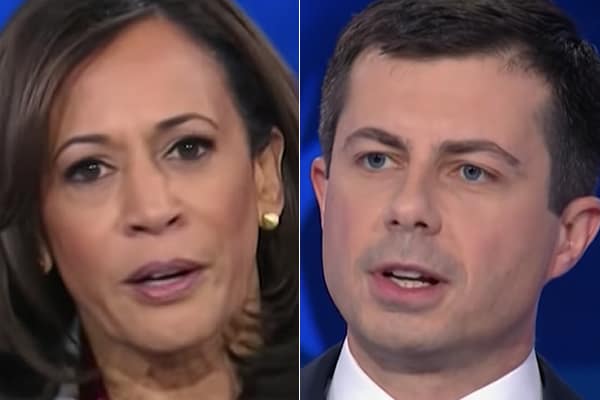 Harris: Buttigieg ‘A Bit Naive’ for Comments on Gay Experience

The day after the presidential debate in which Pete Buttigieg reflected on the experience of being gay in America when asked about his issues with diversity, Sen. Kamala Harris called the South Bend mayor “a bit naive” to bring that up, according to CBS News.

During a a Black Women Power Breakfast on Thursday hosted by Higher Heights, a national political organization for black women that supports Harris, the California Democrat said it was wrong for Buttigieg to “compare our struggles.”

“Those of us who’ve been involved in civil rights for a long time we know that it is important that we not compare our struggles,” Harris was quoted as saying. “It is not productive, it is not smart and strategically it works against what we need to do which is build coalition. We know that in our ongoing fight for civil rights if any one of us starts to differentiate ourselves in a certain way and in particular what he did on the stage, it’s just not productive. And I think it’s a bit naïve.”

Asked by NBC News about Harris’ remarks, Buttigieg rejected them and said “there’s no equating those two experiences.”

“What I do think is it’s important for each of us to reveal who we are and what motivates us and it’s important for voters to understand what makes me tick, what moves me and my sources of motivation and ensuring that I stand up for others,” Buttigieg was quoted as saying. “Last night I shared that some of my sources of motivation included my personal experience, my governing experience and my personal faith.”

It should be noted in the debate last night, Buttigieg in his remarks explicitly distinguished his experience from that of black Americans.

“While I do not have the experience of ever having been discriminated against because of the color of my skin, I do have the experience of sometimes feeling like a stranger in my own country, turning on the news and seeing my own rights come up for debate,” Buttigieg said, “and seeing my rights expanded by a coalition of people like me and people not at all like me, working side-by-side, shoulder-to-shoulder, making it possible for me to be standing here wearing a ring in a way that couldn’t have happened two elections ago.”

Harris made the comments the day after the Washington Blade published an article finding she has cast in rosier terms than it deserves an agreement she reached as California attorney general enabling transgender inmates to obtain gender assignment surgery. According to data obtained by the Blade under a Public Records Act request, only seven prisoners ever got the male-to-female procedure out of 130 who asked since the policy was put in place in 2015.

The exchange comes as Buttigieg continues his rise in the polls, but continues to lag in support among people of color. A leaked memo from the Buttigieg campaign focus groups blamed the lack of support on discomfort with Buttigieg’s sexual orientation in the black community.

However LGBTQ advocates, including LGBTQ Victory Institute head Annise Parker, have disputed that. Harris herself called the notion black voters are homophobic a “trope.”

The Blade has placed a request seeking comment on Harris’ remarks with the LGBTQ Victory Fund.