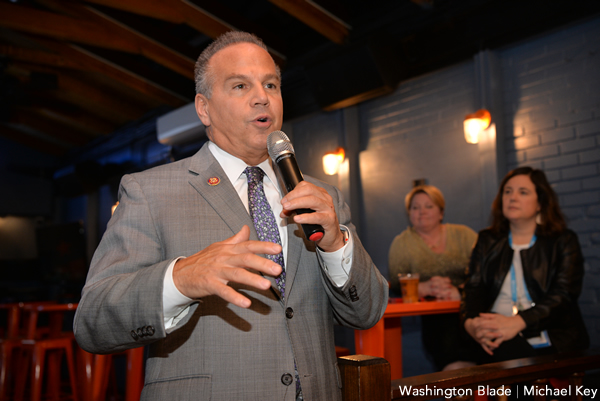 A new resolution introduced in the U.S. House apologizes for the federal government’s treatment of LGBTQ federal civilian workers and U.S. service members, who were once subject to expulsion from their positions because of their sexual orientation or gender identity.

The measure, introduced on Wednesday by Rep. David Ciciline (D-R.I.), is a companion to an identical resolution introduced last month in the U.S. Senate by Sens. Tim Kaine (D-Va.) and Tammy Baldwin (D-Wis.).

“Our government spent years persecuting or wrongfully terminating LGBT individuals for no reason other than they loved the wrong person,” Cicilline said in a statement. “The call to service is one of the greatest acts of patriotism, but to be denied that opportunity because of who they were is one of our country’s greatest injustices. It’s long past time the government acknowledged this horrific practice, apologize to those who were harmed and commit to full equality for all Americans.”

LGBTQ federal civilian workers, Foreign Service officers and U.S. service members are addressed in the apology in the resolution. Although they can now serve in their positions freely, that is a change after decades of policy and law requiring them to be discharged for being LGBTQ.

The 1993 law known as “Don’t Ask, Don’t Tell” required the discharge of U.S. service members for being openly gay, although that law was repealed in 2010 under former President Obama. Previously, the U.S. military had an administrative policy that allowed investigations into service members and their discharge if they were found to be gay.

Civilian federal workers also have a history of facing discharge for being gay. Most famous is Frank Kameny, who was fired from his job in the U.S. government as an astronomer in 1958, prompting his work as a gay rights pioneer.

Most recent among the categories enumerated in the resolution are transgender service members, who until the Biden administration were essentially barred from military service as a result of policy under President Trump. Biden reversed that prohibition in his first week in office via executive order.

Joining Cicilline in introducing the resolution as an original co-sponsor is Rep. Mark Takano (D-Calif.), who along with Cicilline is an openly gay member of Congress and a co-chair of the Congressional LGBTQ+ Equality Caucus.

“LGBT civil servants and service members have served with honor, distinction, and often, in the face of intense discrimination and fear of termination,” Takano said in a statement. “They heroically committed their lives to the betterment of our nation, only to be met with longstanding policies barring them from service or forcing them to conceal who they are. In our ongoing effort to create a more equal, inclusive, and accepting country, we must acknowledge our past shortcomings and reaffirm our commitment to treating all people with fairness and respect.