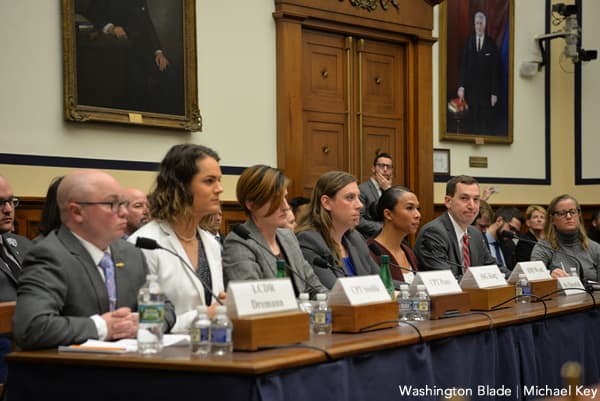 A hearing on Capitol Hill Wednesday became a veritable tale of two cities as transgender troops testified about their commitment to military service while Trump administration officials sought to explain why they would seek to deny them from enlisting in the armed forces (while at the same denying their proposed policy was a ban).

Each of the five transgender service members told the House Armed Services Personnel Subcommittee about their military records, which consisted in some cases of years of military service and deployments overseas.

Meanwhile, the Trump administration — at a time when the Army is falling short of making its recruitment goals — is seeking to implement a policy to bar transgender people like them from enlistment, although for the time being the courts have blocked the policy.

Lt. Cmdr. Blake Dremann, president of the transgender military group SPARTA, has been in the Navy for 14 years and talked about experiencing firsthand — as a lesbian who later came out as transgender — changes in policy allowing women on submarines, and end to “Don’t Ask, Don’t Tell” and transgender people in the military.

“Good leaders can take a team and make it work,” Dremann said. “Great leaders mold their teams to exceed expectations because it doesn’t matter if you’re female or LGBT. What matters is that each member is capable and focused on the mission.”

Capt. Jennifer Peace, who has served for 15 years in the Army and currently serves as an intelligence officer for Iran in the Defense Intelligence Agency, testified there had never been an issue within the unit she commanded because she was transgender.

“We were out for extended time periods in the theater, in the deserts of California, in the forest of Wisconsin,” Peace said. “There were never any issues that arose to being transgender. Between the time of the initial announcement of open service and the tweets of our commander-in-chief, the fact that I was transgender never came up. It wasn’t something that needed to be discussed.”

As a company commander, Peace said she knows the importance of readiness and would “be the first person to kick out a transgender service member if they are not able to meet the standards, if they are unable to deploy, engage and destroy the enemies of the United States.”

Army Staff Sergeant Patricia King, who has served in the Army for 19 years, talked about her experience having been deployed three times to Afghanistan and being transgender in the military.

“From the get-go, none of that mattered to the soldiers to my squad,” King said. “Most of them are 21 years old or younger, and people in Generation Z simply aren’t worried about trans very much. Much like their iPhones or Facebook, they grew up with trans people in their lives.”

King concluded, “Laverne Cox is a household name for Generation Z, much like we grew up with Laverne & Shirley.”

The transgender service members testified in civilian attire and not their uniforms. A Speier aide said they weren’t in uniform because they aren’t testifying in their official capacities as department representatives.

Testifying alongside the transgender service members was Jesse Ehrenfeld, a combat veteran who deployed to Afghanistan and is now a professor at the Vanderbilt University School of Medicine.

Although he testified in a personal capacity, Ehrenfeld expressed views similar to those of the American Medical Association, which has concluded there’s no medical need to bar transgender people from military service.

“I would like to say unequivocally for the record that there is no medically valid reason, including a diagnosis of gender dysphoria, to exclude transgender individuals from military service,” Ehrenfeld said.

Chairing the hearing was House Armed Services Personnel Subcommittee Chair Jackie Speier (D-Calif.), who has introduced legislation that would bar the Defense Department from excluding qualified transgender people from the military on the basis of their gender identity.

“Despite living in a nation where many discriminate against you, you made a choice that fewer and fewer Americans make,” Speier said. “You joined the military, and risked your lives and your family’s well-being for our safety. And how has the administration thanked you? By treating you like a liability, not an asset.”

Rep. Deb Haaland (D-N.M.), one of two of the first female Native Americans elected to Congress in 2018, was visibly emotional as she thanked the transgender witnesses for their service, recalling her experience as a child growing up in a military family.

“Regardless of what the president says, there are millions of Americans who appreciate the service that you give to our country,” Haaland said.

Making a veiled criticism of President Trump, Haaland said, “If there’s one person that isn’t fit to serve — we all know who that is right now, because that person devalues things that people want to do to make our country better and to move forward.”

“And although I can’t apologize for that person, I can tell you that I can do everything in my power to make sure that we can bring back some civility and respect to the people who are serving our country,” Haaland said.

Two Trump administration officials, however, came to the hearing to defend the administration policy: James Stewart, who’s performing the duties of under secretary of defense for personnel and readiness, and Vice Adm. Raquel Bono, director of the Defense Health Agency.

Stewart repeatedly said the Trump policy was not a ban because it wasn’t an exclusion of transgender people, but a blanket medical policy requiring discharges and inadmission for individuals diagnosed with gender dysphoria (which is often a defining characteristic of being transgender.)

“The new policy ends the practice of providing special accommodations for individuals with a history or diagnosis of gender dysphoria and transition-related treatment,” Stewart said. “Rather, it approaches the condition in the same manner as the department manages any serious medical condition for recession and retention purposes, ensuring equal application of military standards for all persons regardless of gender identity.”

A key moment came when Stewart — who insisted the policy would grandfather openly transgender people currently in the armed forces — was asked whether those individuals would be eligible for certain promotions, a change in services or readmission to the military if they dropped out to pursue an education opportunity. Stewart simply repeatedly his line the policy grandfathers openly transgender people currently in the military.

Rep. Anthony Brown (D-Md.), who took part in the hearing as a guest of the subcommittee, sought to expose the Trump policy as a ban in a fiery exchange when he pointed out even individuals who have treated their gender dysphoria wouldn’t be allowed to enlist in the armed forces.

“We are not talking about heart surgery and diabetes,” Brown said. “We are talking about a group of Americans who identify as transgender. I’ve never seen a group of Americans, OK, who are prone to heart attacks who come lobbying Congress and say give us the right to serve even though the risk of heart attack is very great because I’ve already had three or four. That’s mixing apples and oranges and I don’t appreciate that.”

The only Republican who came to the hearing and asked questions was Rep. Trent Kelly (R-Miss.), top Republican on the House Armed Services Personnel Subcommittee.

Although Kelly in his opening remarks suggested an openness to the idea of transgender military service, he also said “categorical exceptions for certain groups” in military standards “undermine military readiness.”

Kelly asked each of the transgender witnesses how long they were non-deployable as a result of going through transition-related care. Each of them responded they were out of commission for a small length of time and often used personal vacation time for the care and recovery.

Dremann, for example, said he was non-deployable for seven weeks, which he said is shorter than the amount of time a service member is non-deployable after having shoulder surgery.

Despite his initial openness, Kelly seemed to take the side of the Trump administration. When Stewart sought to come up with surgeries other than gender reassignment surgery that could bar people from military service, Kelly posited such a procedure, suggesting he thinks the exclusion is justified.

As part of this exchange, Bono said individuals who’ve had surgery for cancer or back surgery are ineligible to enlist in the military. Speier was quick to point out that policy is because cancer can come out of remission and individuals who have had back surgery can still suffer back problems.

(Rep. Matt Gaetz (R-Fla.), fresh from his controversy over his tweets insinuating Trump’s former attorney Michael Cohen has engaged in adultery, was in attendance for a brief time, but asked no questions. Gaetz repeatedly walked in and out of the hearing room with his cell phone to his ear.)

At another crucial moment, Speier asked Stewart to submit to the committee transcripts of the discussion within the Defense Department panel that developed the transgender policy. Consulting with his legal counsel, Stewart said the Trump administration has invoked privilege to withhold that information as part of discovery as litigation against the ban unfolds.

Speier said the administration could retract the names of the individuals in the transcripts and would expect them once the courts have ruled whether that is privileged information.

“Presuming that you lose in that regard and that information becomes available to the other side in discovery, then you should be in a position to make it available to this committee,” Speier said.

After the hearing concluded, Speier told the Blade the next steps include moving forward with her legislation, likely as an amendment to the fiscal year 2020 defense authorization bill.

“I think we’re still trying to understand some of the dysfunctionality of the potential decision-making,” Speier said. “Right now, thank goodness, policy is in effect, so we’re not at that precipice, but we’ll certainly take it up with the NDAA on some level.”