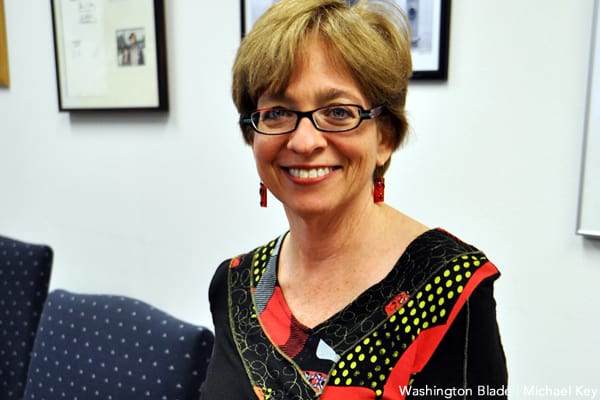 The nomination of lesbian attorney Chai Feldblum for a third term on the U.S. Equal Employment Opportunity Commission died in the Senate last week when Senate Majority Leader Mitch McConnell (R-Ky.) declined to allow a vote to break a hold placed on the nomination by a single senator.

Sen. Mike Lee (R-Utah) in early December invoked a longstanding Senate rule that gives a single senator the ability to hold up and potentially kill a presidential nomination when he filed an official objection to Feldblum’s nomination on grounds that he disagrees with her record of support for LGBT rights.

Among other things, Lee cited what he said were Feldblum’s past statements and actions showing she has a bias against “religious freedom” principles as applied to employment law. Feldblum and her supporters have said Lee misinterpreted Feldblum’s positions on such issues, saying she has a deep respect for faith related matters as the daughter of an Orthodox Jewish Rabbi.

Lee’s objection came after President Donald Trump earlier in 2018 nominated Feldblum for a third term on the EEOC at the request of Senate Democrats as part of a longstanding bipartisan tradition of appointing EEOC members from both political parties. At the time he nominated Feldblum, a Democrat, Trump also nominated two others for the EEOC that were recommended by Senate Republicans.

Since the three nominees were submitted to the Senate as a package, Lee placed all three on hold. Similar to Feldblum’s nomination, Trump nominees Janet Dhillon and Daniel Gade, both Republicans, also died at the end of the Senate’s 2018 session for lack of a vote.

Feldblum, a nationally recognized civil rights attorney, told the Washington Blade this week that her supporters in the Senate told her they believed they had the 60 votes needed to break the hold placed on her and the other two nominees by Lee. But under Senate rules, such a vote could not take place unless it was arranged for by the majority party leadership, including Senate Majority Leader McConnell.

“Today at noon my commission on the EEOC expires,” Feldblum said in a Jan. 3 Facebook posting. “What a wonderful almost nine-year run I have had!” she said. “I will always be grateful for the wonderful colleagues I have served with on the Commission,” she continued.

“Thank you to everyone who worked so hard for my confirmation. We certainly gave it our best shot,” she said. “Now is the time to fight even harder for diversity, safety, and equity. There is no other way!”

Feldblum has been credited with playing a lead role in two pivotal EEOC rulings in support of LGBT employment rights.

In 2015 she was part of the 3-2 majority vote by the five-member EEOC that found that employment discrimination based on sexual orientation constitutes gender discrimination under Title VII of the U.S. Civil Rights Act of 1964.

In 2012, Feldblum was part of the EEOC’s unanimous ruling that employment discrimination against transgender people also violates Title VII of the 1964 Civil Rights Act.

“For nearly nine years Chai Feldblum worked tirelessly with the U.S. Equal Employment Opportunity Commission to uphold our nation’s civil rights laws,” said David Stacy, Director of Government Affairs for the Human Rights Campaign. “As a skilled attorney and public servant who has passionately advocated for equality under the law, Feldblum more than deserved to be confirmed for another term,” Stacy said.

“While Senate Democrats fought hard to move her nomination forward and she most certainly would have been confirmed with strong bipartisan support, Senate Majority Leader Mitch McConnell shamefully refused to schedule a vote,” Stacy said. “The blame for this disgraceful outcome falls squarely on the shoulders of Senator Lee and Senate Majority Leader McConnell.”

Elliot Imse, Senior Director of Communications for the LGBTQ Victory Institute, which advocates for the election and appointment of LGBT people for public office, said it was the “height of irony and absolutely unconscionable” that Feldblum was removed from her position at the EEOC because she is a lesbian.

“Mike Lee is a bigot, period, and his actions must be condemned by all members of Congress who believe LGBTQ Americans have the right to work free of discrimination,” Imse said.

Spokespersons for Lee and McConnell couldn’t immediately be reached for comment.

In comments on the Senate floor last month expressing his opposition to Feldblum’s nomination Lee stated, “Ms. Feldblum has written that she sees a conflict between religious belief and LGBT liberty as ‘a zero sum game’ where ‘a gain for one side necessarily entails a corresponding loss for the other side.”

Feldblum has called  this characterization inaccurate and misleading, saying that while nondiscrimination laws must prevail in cases involving employers doing business with the general public, such laws could place burdens on religious exercise and that “government should err on the side of accepting” such a burden could exist.