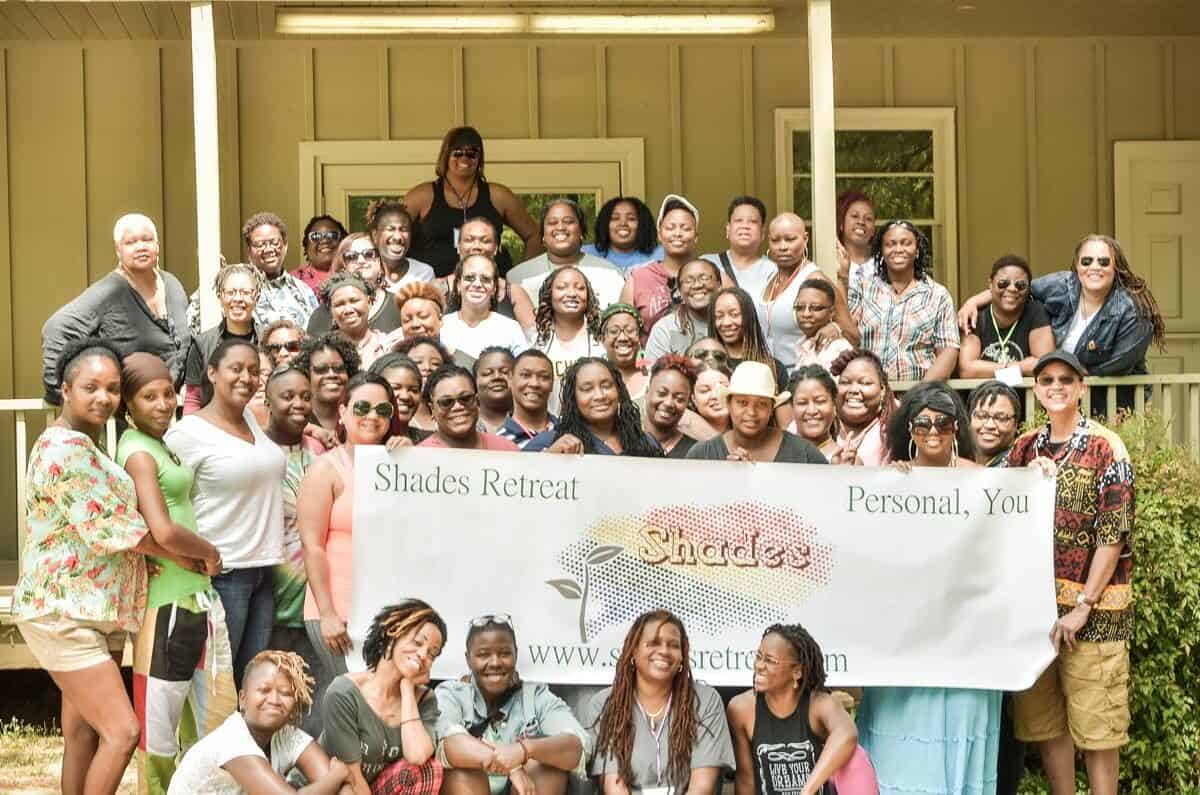 Growing up in Mississippi, Anondra Williams learned early on to view trees as more than greenery. They served as neighborhood hubs, men and women gathering beneath their shady branches to talk, drink and let go of the long work week.

Decades later, when the Atlanta-based author and poet wanted to create a safe place where lesbians of color could come together, Williams knew she needed build a brand.

“Shades is a home for women of color to come to find themselves, grow, be empowered to seek change, and be in the company of other women who are seeking the same,” said Williams.

Her retreat for LGBTQ women will celebrate its 10th year in April and has grown every year. “Shades Retreat: Personal You: A Southern Retreat for Queer Women of Color” draws in dozens of primarily black women to the woods of Flovilla, Georgia for four days of self-improvement workshops, drumming, networking and generally getting away from it all.

The anniversary is a bittersweet one. This year will be the retreat’s last in Georgia as Williams and her wife prepare to move to Asia and take the event with them. Williams sees it as a new beginning.

“The retreat is growing. It’s evolving along with me,” Williams said. “In 2020 it will come to life – it will be a different Shades.”

Williams is private about the personal circumstances that led her to create Shades. “I had made some life choices things weren’t working out favorably,” she said. In 2008, the then 37-year-old knew she needed some guidance from older lesbians of color. She had difficulties finding retreats geared towards black LGBTQ women in the South, so she launched her own event. She did most of the work creating the website, booking presenters and even doing grocery shopping.

The first year was a little rocky, she admits. The main cabin at the site she chose could barely fit her 48 attendees who endured severe storms all weekend. She priced the event too low and had to absorb most of the expenses. She also had problems choosing good presenters.

“Workshops just weren’t that great,” she said. “They looked good on paper, but they just weren’t great in person.” Williams also struggled with shaping the identity of the retreat, which she envisioned as exclusively for minority women. A few years in, the event hit its stride. The retreat now draws up to 68 mostly black women from all walks of life; previous years’ attendees included popular queer author Fiona Zedde.

“Many women wanted to come, but they weren’t women of color,” said Williams. “The world itself is not designed for women of color. Especially in America, we’re marginalized and penalized. This to me was a safe space.”

Attendees like web developer Nichole Lanier are regulars at the retreat. She offers Reiki healing services and enjoys the chance to build lasting connections. “It has progressed energy-wise with people feeling more comfortable with each other,” she said. “In the beginning you kind of side-eyed it, but after the years have passed, you realize you’re in a safe space where you can heal.”

Williams said hosting the event also has empowered her to realize a personal dream: traveling the world. In June, the newlywed will relocate to Cambodia where she’ll reinvent Shades overseas. She says it’ll be the same environment with the same offerings but with a smaller, more intense group. So far, the response has been excellent.

“They’re like ‘Let’s do it’,” said Williams, who’s certain she can keep the event going strong. “It’s going to be successful. I have no choice.”