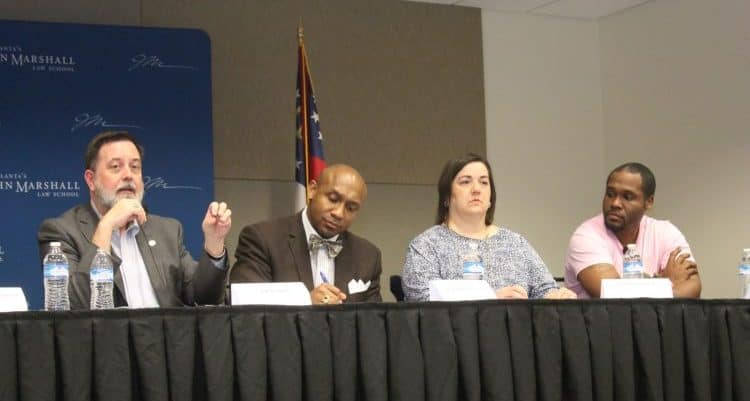 Patrick Saunders
Georgia
February 22, 2017
A panel of LGBT leaders and civil rights attorneys met on a rainy Tuesday night in Midtown to discuss the need for comprehensive civil rights legislation in Georgia. The timing of the previously scheduled meeting was fitting, as Georgia Senate Republicans introduced a so-called “religious freedom” bill just hours earlier. State Sen. Lester Jackson (D-Savannah), who introduced a LGBT-inclusive comprehensive civil rights bill last week, was scheduled to appear at the panel event but was unable to attend.

Jeff Graham, executive director of Georgia Equality, pointed out how the LGBT community is not explicitly protected by the Civil Rights Act of 1964, a point echoed by attorney and John Marshall Law School law professor Kathleen Burch.

“It’s not comprehensive,” Burch said. “It doesn’t capture everyone and everything. In order for that to happen, it really has to happen at the state level.”

Graham said for years LGBT activists and leaders focused primarily on passage of the federal Employment Non-Discrimination Act, but now is the time for more comprehensive protections like Sen. Jackson’s Senate Bill 119.

“We’re taking this grand federal promise of equality under the law and we’re bringing it to the state of Georgia,” he said. “Not only is this important for the LGBT community to have these protections under law, because we’re not going to see Congress act on them anytime soon, so it is up to the states to protect their own citizens. But more than that, we can make a statement around values that Georgia has not made before, and that is that civil rights is something for all people that we want to enshrine into our own state laws.”

Graham agreed, saying, “Now more than ever, we need our states to protect us. I think that we’ve relied upon our federal government, and there’s just a lot of unease and unknown with how strong those federal protections will remain and be enforced.”

But in order attain successful passage of the bill, or emerge victorious in any other similar civil rights fights in Georgia, attorney Mawuli Mel Davis said different communities need to do it together.

“Those of us who want to see change have to be willing to support all of these different movements,” he said. “The order of the day is resistance. People are saying it. ‘Resist, resist.’ But if we’re going to build relationships, I have to know that when my issue is the hot button issue or when something comes up, that you’ll have my back, and vice versa. That’s how we build relationships.”

“What we’re talking about is trying to create loopholes for nondiscrimination protections that don’t even exist,” he said. “It really opens up a Pandora’s box, and because Georgia does not have any comprehensive civil rights law, in my mind it tilts the scales automatically in favor of people that claim a specific religious exemption. And there’s no balance under the law to it, and that’s what scares me the most.”

The event, which was moderated by state Rep. Keisha Waites (D-Atlanta) and included remarks by newly-named ACLU of Georgia Executive Director Andrea Young, was the first of two addressing the need for comprehensive civil rights legislation, with Georgia Equality Senior Field Organizer Rob Woods telling us that the next one will take place next month at Mercer University in Macon.