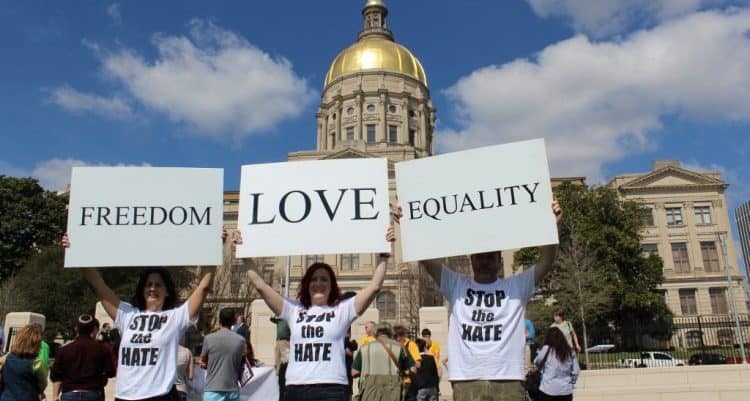 “It’s important that Georgia is taking the steps so we can move the state forward and I’m happy to see we have legislators who are brave enough to do that,” said former state Rep. Simone Bell, Southern region director for Lambda Legal. “Starting the conversation is always the best thing and we do hope the Senate and the House will be courageous enough to pass it so all of Georgia’s population can be covered under a civil rights bill.”

SB 119 seeks to amend the Official Code of Georgia to prohibit discrimination based on sexual orientation and gender identity in housing, the workplace and other instances.

“After the election of Nov. 8 … our atmosphere with diversity and inclusion is increasingly at risk,” said Sen. Vincent Fort (D-Atlanta), one of the co-sponsors. “In the Trump era, it’s important that a bill like this be introduced, be stated and made part of the public discussion and debate.”

The bill begins by prohibiting discrimination in the housing market, including sales, rentals and brokerage services, based on sexuality and gender orientation.

It also adds a new chapter to Title 10 of the Official Code of Georgia, creating public accommodation laws, stating that “all persons shall be entitled to the full and equal enjoyment of the goods, services, facilities, privileges, advantages and accommodations of any place of public accommodation without discrimination or segregation on the basis of race, color, religion, sex, sexual orientation, gender identity or national origin.”

SB 119 adds workplace protections as well, promising to “promote the elimination against all individuals in public employment because of” a number of factors, including sexual orientation and gender identity. It also adds sex- and gender-based discrimination to the state constitution as unlawful practices for employers.

“It’s needed and necessary. Georgia should not be one of the few states without a civil rights law,” Fort said.

Georgia is one of five states that do not have public accommodation laws for non-disabled individuals, according to the National Conference of State Legislatures. Such laws prohibit discrimination on the basis of race, gender, religion and background, and in a number of states, there are protections against discrimination based on age, sexual orientation and gender identity.

“We’re very pleased that the Senate is taking this position and certainly appreciate Sen. Jackson from Savannah taking some leadership on this. I think it’s really very great and a really important moment here in Georgia for our movement toward full equality under the law,” said Jeff Graham, executive director of Georgia Equality.

Georgia Equality is one of several groups working diligently to get a comprehensive civil rights bill passed. They knew the Senate Democrats had something up their sleeves, but weren’t sure when anything official would hit the hopper.

The group continues to work on additional bills addressing discrimination “to a lesser degree” and is in the process of seeking co-sponsors for some of that legislation.

Graham hopes to see both the state Senate and House hold hearings on the bill, and wants more legislators to become aware of Georgia’s lack of statewide, comprehensive civil rights legislation. If passed, the SB 119 will become law Jan. 1, 2018.

“After the marriage equality decision, many of us realized it was just, in many ways, just the beginning,” Fort said. “There was still a lot to be done, a lot of fights to fight.”