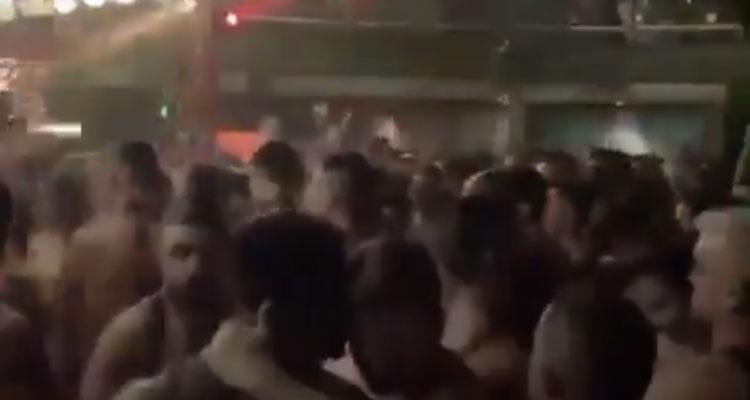 A man who has been unidentified died this weekend at an unofficial Atlanta Pride party.

The man was unconscious in the basement of BJ Roosters during Xion, a circuit party lasting from 3-7am Sunday morning (October 11), when police were called, according to 11 Alive. The man, who has been described as a Black man in his 40s or 50s by an party goer who provided a statement to LGBTQ Nation, was pronounced dead at Piedmont Hospital about 40 minutes later.

According to the victim’s partner, he had taken ecstasy pills at the club.

Police say there were no signs of foul play or trauma, but further details are limited as the investigation continues.

The Xion was hosted by GA Boy Events, a party promotion company owned by Keith Allen Young. The event was “packed” according to the party attendee who said the tragedy “could have been avoided.”

“The venue was packed, to overcapacity at times,” the source said in a statement sent to LGBTQ Nation. “There were no protocols in place, clearly no EMTs on-site, and staff there seemed unprepared to handle anything of the sort. It was a minimum of 30 minutes before an ambulance arrived, and I’m being generous. It was tragic. I’ve been to parties all over the world, I have never been to one without EMTs. In my opinion this could have been avoided.”

The circuit party was one of a handful hosted over the Pride weekend, some of which garnered criticism on social media. LGBTQ influencers and Wussy Mag called out party goers on Twitter.

This doesn’t represent Queer Atlanta or Atlanta Pride… this is some selfish bullshit and greedy promoters who want to cash in on the weekend and a slap in the face to our spaces that are actually doing the work or have been forced to shut down. pic.twitter.com/09dcogipZm

atlanta pride last night… what are y’all UP TO… i get that people miss how carefree we used to be able to be… i do too!! but the pandemic isn’t over just because you’re over it pic.twitter.com/ySPmNIgHmA

Taken last night at Atlanta Pride. And publicly posted to Instagram. In the middle of a pandemic. People can be so shitty and selfish. Please don’t be like these people. This is appallingly gross. pic.twitter.com/SDafZ0HXfC

On Saturday (October 10), the Atlanta Pride Committee (APC) released a statement reiterating that all official Pride events were virtual and APC had no involvement with private parties that were held.

“As a marginalized community, we have always had to fight for our survival, be it with mental health, trans health issues, access to quality care, and more,” APC Executive Director Jamie Fergerson said. “In light of that, we are particularly sensitive to the need for taking all precautions to protect ourselves and each other. The most important thing is for all of us to survive this pandemic and to stay health. We have also asked the City of Atlanta and our media partners to amplify the message to have Pride at home, wear masks, and practice harm reduction related to COVID-19.”