The daughter of former Cuban President Raúl Castro on Thursday reiterated her support of efforts to make marriage for same-sex couples a constitutional right in the country.

“This change is very important because it the political will of the state and the government to advance a human rights agenda and extend it to as many areas as possible,” Mariela Castro told the BBC during an interview in London, speaking through a translator. “It is time that the people of Cuba understand the need to recognize and protect the rights of everyone, without excluding people because of their sexuality, their gender identity, disability or race. This is the law of all laws and is about guaranteeing all possible rights.”

Mariela Castro, a member of the Cuban National Assembly who is director of the National Center for Sexual Education, spearheads LGBTI-specific issues on the island.

The National Assembly in the coming weeks is expected to finalize the draft of the proposed new constitution that includes a same-sex marriage amendment. A referendum on it is scheduled to take place on Feb. 24, 2019.

“Cuban society is showing that it remains a society in revolution,” said Mariela Castro.

The Cuban revolution in 1959 toppled then-President Fulgencio Batista. Gay men were among those who were sent to work camps — known as Military Units to Aid Production or UMAPs — in the years after Mariela Castro’s uncle, Fidel Castro, came to power.

“Cuba was part of the world and all the countries on earth were homophobic,” Mariela Castro told the BBC in response to a question about anti-LGBTI discrimination and persecution in Cuba that took place after her uncle came to power. “It wasn’t that there was necessarily persecution against homosexuals. It’s just that homosexuality wasn’t understood. It wasn’t that there were laws penalizing people, but there were ways of limiting homosexual or transgender people.”

“This has been changing thanks to the revolution,” she added. “In the early years, it wasn’t understood that this was an injustice but little by little things has changed through governmental institutions and by civil society. new proposals have come to help change the reality for LGBT people and we are now seeing the changes that take place to protect their rights.”

Fidel Castro apologized for the UMAPs in 2010 during an interview with a Mexican newspaper.

Supporters of Mariela Castro, among other things, note Cuba now offers free sex-reassignment surgeries through its national health care system. President Miguel Díaz-Canel, who the National Assembly chose to succeed Raúl Castro earlier this year, in September said he supports marriage rights for same-sex couples during an interview with Telesur, a television station that is largely funded by the Venezuelan government.

Independent activists and journalists in Cuba with whom the Washington Blade has spoken in recent years say they face harassment and even arrest if they publicly criticize Mariela Castro and/or the Cuban government.

The BBC reporter who interviewed Mariela Castro described Cuba as “a very unfree place” when he asked her about the island’s overall human rights record. Mariela Castro in response to the question equated Spanish colonialism and U.S. policy towards the island, which includes an economic embargo, to human rights abuses against her country.

“The revolution has triumphed,” she said. “It is centered on the human being as its main objective, not on the interest of the ruling class.” 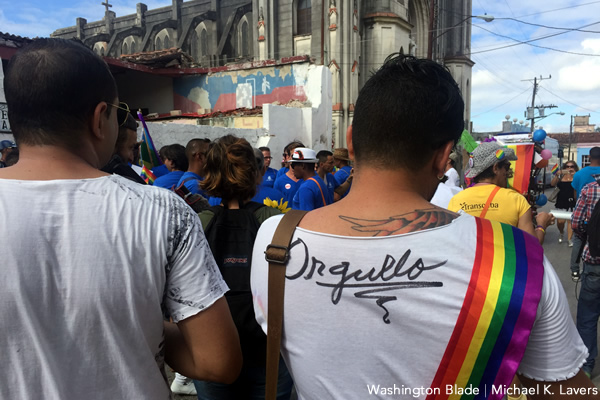 A man takes part in an International Day Against Homophobia and Transphobia march in Santa Clara, Cuba, on May 17, 2017. Critics of the Cuban government maintain activists and journalists who publicly criticize Mariela Castro, the daughter of former Cuban President Raúl Castro, and/or the Communist island’s government face harassment and even arrest. (Washington Blade photo by Michael K. Lavers)