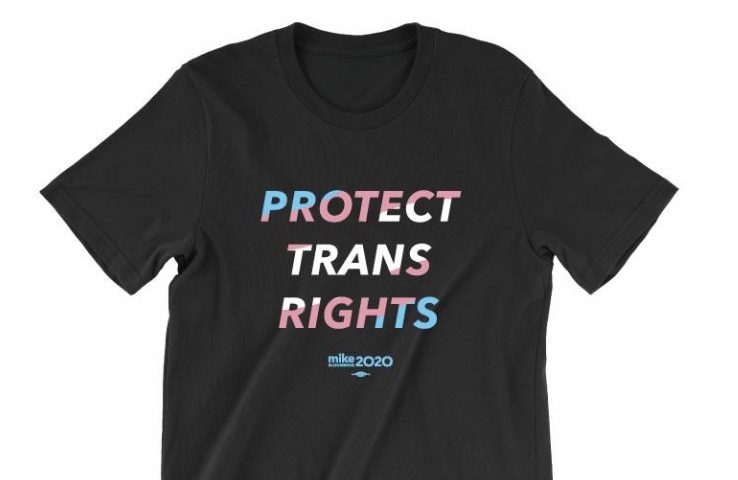 The shirt, priced $22.25 to $25.25, is a simple black t-shirt that reads “Protect Trans Rights” in the transgender pride colors, with Bloomberg’s campaign logo underneath.

The billionaire has self-funded his website and merchandise production, as he has most of his campaign. The shirt is “priced at cost to the campaign and we make no profit from their sale,” according to the website.

While the message is a good one, it falls upon deaf ears after a video of Bloomberg from last year was unearthed showing the Democrat denouncing pro-trans Democrats, saying, “If your conversation during a presidential election is about some guy wearing a dress and whether ‘he,’ ‘she,’ or ‘it’ can go to the locker room with their daughter, that’s not a winning formula with most people.”

While many advocacy groups have requested Bloomberg apologize for these comments, including the Human Rights Campaign, he has yet to issue a formal apology, instead defending himself as describing how others see transgender people, not how he does.

However, as for Bloomberg’s actual policy regarding transgender rights, he plans on reversing President Donald Trump’s transgender military ban and fighting to pass the Equality Act, and his LGBTQ policy page acknowledges “there is a crisis of violence against transgender people, especially trans women of color.”

Bloomberg’s campaign has yet to comment on the t-shirt, according to LGBTQ Nation; however, according to the store’s FAQs, the fulfillment company Bumperactive claims that “we run the campaign’s webstore, make the stuff, and ship out the orders—but we’re not actually part of the campaign.”