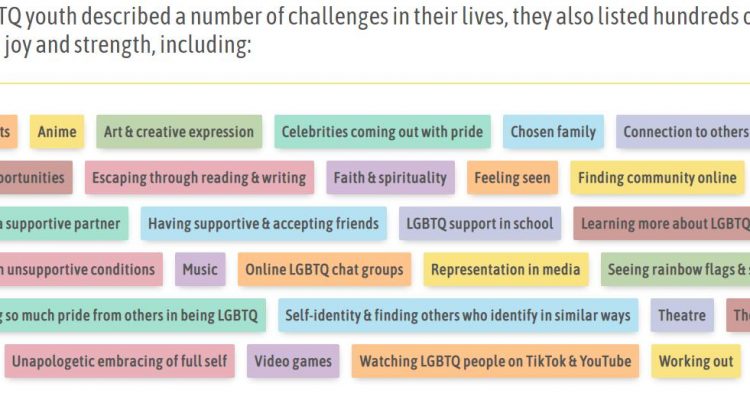 Graphic courtesy of The Trevor Project

80% of LGBTQ Youth Reported the Pandemic Badly Stressed Them Out

In its third annual survey released late last week, The Trevor Project found that well over two-thirds of the 35,000 LGBTQ youth ages 13–24 across the United States interviewed reported that the affects of the coronavirus pandemic has largely negatively impacted their lives.

“The past year has been incredibly difficult for so many LGBTQ young people because of multiple crises, from the COVID-19 pandemic to the hostile political climate and repeated acts of racist and transphobic violence. This data makes clear that LGBTQ youth face unique mental health challenges and continue to experience disparities in access to affirming care, family rejection, and discrimination., ” Amit Paley, CEO & Executive Director of The Trevor Project told the Blade in an emailed statement.

“We are proud that this survey sample is our most diverse yet, with 45% being LGBTQ youth of color and 38% being transgender or nonbinary. The data speaks to the wide variety of experiences and identities held by LGBTQ youth across the country, and emphasizes the need for comprehensive, intersectional policy solutions to confront systemic barriers and end suicide,” he added.

The Trevor Project also noted that this year’s survey reflected a wider sense of diversity, with 45% of LGBTQ youth survey being of color and 38% being transgender or nonbinary. The study highlights that only 1 in 3 LGBTQ+ youths live in an affirming home. It also shows the impact of discrimination on the mental health of LGBTQ+ youths of color.

According to the report, 42% of LGBTQ youth seriously considered attempting suicide in the past year, including more than half of transgender and nonbinary youth. Additionally, 12% of white youth attempted suicide compared to 31% of Native/Indigenous youth, 21% of Black youth, 21% of multiracial youth, 18% of Latinx youth, and 12% of Asian/Pacific Islander youth.

Statistically, LGBTQ+ youth are more at risk for depression and suicide than their heterosexual peers. A contributing factor is the lack of an affirming home space or environment. More than 80% of LGBTQ youth stated that COVID-19 made their living situation more stressful — and only 1 in 3 LGBTQ youth found their home to be LGBTQ-affirming.

“These findings are extremely concerning as they highlight many distinct factors that contribute to LGBTQ youth suicide risk. But we encourage lawmakers, public health officials, and youth-serving organizations to focus on the protective factors illuminated in the data, which point to best practices on how to better support LGBTQ young people,” Dr. Amy Green, Vice President of Research at The Trevor Project the licensed clinical psychologist who oversaw the survey said.

“Once again, we find that LGBTQ-affirming spaces and transgender-inclusive policies and practices are consistently associated with lower rates of attempting suicide. The past year has been really difficult for so many of us, but we also know that LGBTQ youth in particular are facing unique challenges,” said Green.

70% of LGBTQ youth stated that their mental health was “poor” most of the time or always during COVID-19.

48% of LGBTQ youth reported they wanted counseling from a mental health professional but were unable to receive it in the past year.

30% of LGBTQ youth experienced food insecurity in the past month, including half of all Native/Indigenous LGBTQ youth.

75% of LGBTQ youth reported that they had experienced discrimination based on their sexual orientation or gender identity at least once in their lifetime.

Half of all LGBTQ youth of color reported discrimination based on their race/ethnicity in the past year, including 67% of Black LGBTQ youth and 60% of Asian/Pacific Islander LGBTQ youth.

13% of LGBTQ youth reported being subjected to conversion therapy, with 83% reporting it occurred when they were under age 18.

Transgender and nonbinary youth who reported having pronouns respected by all of the people they lived with attempted suicide at half the rate of those who did not have their pronouns respected by anyone with whom they lived. Trans and nonbinary youth who were able to change their name and/or gender marker on legal documents, such as driver’s licenses and birth certificates, reported lower rates of attempting suicide.

LGBTQ youth who had access to spaces that affirmed their sexual orientation and gender identity reported lower rates of attempting suicide. An overwhelming majority of LGBTQ youth said that social media has both positive (96%) and negative (88%)impacts on their mental health and well-being.

“The Trevor Project is the largest suicide prevention organization for LGBTQ youth, but even we do not know how many LGBTQ youth die by suicide each year because that data is simply not collected systematically,” Green said and added; “This third annual survey aims to fill the gaps in the limited research we do have on LGBTQ youth mental health and suicide risk as a means to raise public awareness and improve public health interventions.”