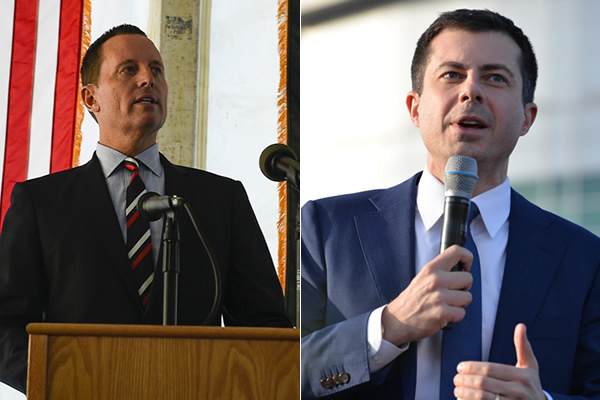 Two gay campaign surrogates — Richard Grenell and Pete Buttigieg — are making waves in the media highlighting LGBTQ support in the presidential election, but they’re on opposing sides in making the case for which candidate is the better choice.

Buttigieg is appearing at Joe Biden rallies and hitting the media circuit to stump for Biden. Meanwhile, Grenell is drawing crowds at Trump Pride events in competitive states — along with Tiffany Trump and Kimberly Guilfoyle — as the face of LGBTQ outreach for President Trump’s campaign to win re-election.

Grenell, during an appearance on Fox News on Saturday, predicted gays would form an increased component of a voting bloc re-electing Trump on Election Day along with other communities.

“When you look at the coalition that has come together for President Trump, it’s working class, it’s more Blacks, more Hispanics, more gays, more working class than ever before,” Grenell said. “I think that Donald Trump is set to win this bigger than he won in 2016 just because of the coalition and the excitement.”

Grenell’s prediction, however, would be a remarkable change from the LGBTQ community’s history of overwhelmingly siding with the Democratic nominee in presidential contests. That’s likely to continue given the anti-LGBTQ record Trump has established, including a transgender military ban and excluding LGBTQ people from enforcement of civil rights law.

Buttigieg, who made history as an openly gay presidential candidate in the Democratic primary, has stumped for Biden, even appearing on Fox News to dismantle conservative attacks on the Democratic nominee.

During an appearance on Fox News on Oct. 22, Buttigieg shot down questions about Hunter Biden’s alleged emails by redirecting the issue to Trump having a bank account in China as reported by the New York Times.

“That’s not like, you know, something somebody said that used to work with somebody related to the president. That’s a matter of documented fact. And they won’t even tell us what bank it’s with,” Buttigieg continued. “Does that bother Americans? I’m pretty sure it bothers Americans a lot more than what they’re trying to whip up for the last 12 days of this election season.”

During prep for the vice presidential debate between Kamala Harris and Mike Pence, Buttigieg was a stand-in for Pence — ironically taking on the role of a notoriously anti-LGBTQ politician as a gay man — during practice sessions for Harris.

Buttigieg made a reference to that role during a Florida rally on Oct. 28 on the campaign trail for Biden as well as his appearance on Fox News.

It was the same rally where Buttigieg shot down a pro-Trump heckler, asking him if he’d denounce white supremacy. When the heckler in the “Make America Great Again” hat apparently responded in the affirmative, Buttigieg replied he agrees, adding “That’s a beginning. Now see if you can get your president to do the same thing.”

In one recent incident, there’s been crossover between Grenell and Buttigieg. For suggesting the Biden campaign would instate lockdowns to contain the coronavirus pandemic, Grenell on Sunday took Buttigieg to task, mocking the Biden surrogate for saying “everything is on the table.”

“Yikes! Mayor Pete says a total lockdown across the country is being considered by Joe Biden,” Grenell tweeted.

A fuller look at Buttigieg’s comments in response to Jake Tapper’s question on CNN’s “State of the Union” on whether another lockdown should be on the table reveal Buttigieg wasn’t quite as definitive.

“Well, hopefully it doesn’t come to that because we will see swift action coordinating with and supporting public health authorities, telling what we can do as citizens without requiring any kind of mandates, but everything has to be on the table in order to keep Americans safe,” Buttigieg said.

In both situations, Grenell and Buttigieg are positioning themselves as prime candidates for high-level jobs in the upcoming administration, depending on whether or not the person they’re backing succeeds on Election Day.

For Grenell, an appointment to the Trump administration would be a return for him after serving as U.S. ambassador to Germany and acting director of national intelligence. Grenell appears to have his eyes on a high-level job in foreign policy, either as national security adviser or secretary of state.

In an essay posted Oct. 28 for Carnegie Mellon University’s Center for International Relations and Politics, Grenell laid out a foreign policy vision consistent with Trump’s “America First” approach, which would seek new bilateral relations with Russia to ramp up competition with China.

“If one thread connected my time as US Ambassador to Germany, it was the effort to convince America’s European allies that their current position is untenable,” Grenell writes. “I spent much of my time in Berlin helping coordinate responses to Chinese and Russian espionage, technology theft, political interference, violations of sovereignty, threats to freedom of speech, and attempts to purge historical facts. It is clear that the Kremlin and the Chinese Communist Party will not eventually converge with the values and interests of Western Europe.”

Buttigieg would be coming to the federal government for the first time — and several possible appointments would be viable for him given his background as former South Bend mayor, Afghanistan war veteran, Rhodes scholar and McKinsey consultant.

Elliot Imse, a spokesperson for the LGBTQ Victory Institute, said Buttigieg set himself up for an important post in the Biden administration by helping on the campaign trail and endorsing Biden early in the Democratic primary.

“Disunity among Democrats contributed to the disaster that put Trump in office and much of Pete’s decision making is built around avoiding that in 2020,” Imse said. “Pete left the primary race before Super Tuesday to promote unity in the party and now he is working to ensure those he inspired get out and vote for Joe Biden. That he has been such an effective surrogate will certainly put him on the short list for jobs in the new administration.”

Imse identified numerous jobs that would be suitable for Buttigieg in a Biden administration, adding the LGBTQ Victory Institute would assist him through its Presidential Appointments Project initiative.

“His appointment as secretary of state or ambassador to the United Nations would send a strong signal that America is recommitting itself to LGBTQ equality at home and abroad,” Imse said, “His appointment to lead Veterans Affairs just 10 years after the repeal of ‘Don’t Ask, Don’t Tell’ would also be historic. Pete proved himself a competent administrator and strong communicator both as a mayor and as a presidential candidate and those are qualities any president would look for in building a team.”