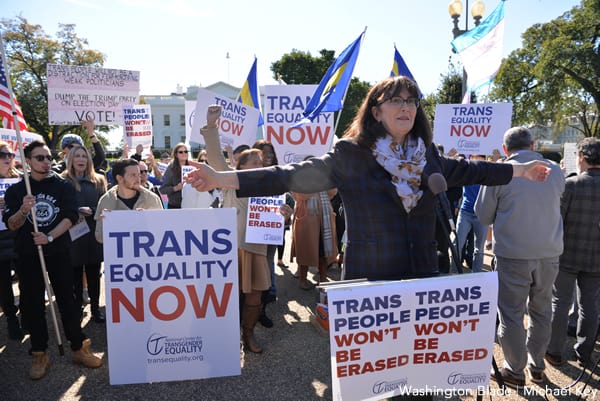 Upwards of 200 people gathered outside the White House on Monday to protest against the Trump administration’s proposal to define sex in federal policy as biological gender.

National Center for Transgender Equality Executive Director Mara Keisling and Casa Ruby CEO Ruby Corado are among those who spoke at the #WontBeErased rally. Keisling, Corado, National LGBTQ Task Force Rea Carey, Freedom for All Americans CEO Masen Davis and others spoke at the Human Rights Campaign before they marched to the White House.

The New York Times over the weekend published a report on the proposal, which the newspaper said would amount to “defining transgender out of existence.” Transgender rights advocates and their supporters quickly criticized the proposal that emerged less than three weeks before the midterm elections.

“Despite the cruel efforts of the Trump administration, trans people #WontBeErased,” wrote Rodrigo Heng-Lehtinen, the trans son of U.S. Rep. Ileana Ros-Lehtinen (R-Fla.), on his Twitter page. “We are your family, friends, neighbors, and coworkers. We are committed community organizers who have been beating the odds for generations. This administration will not define us bc we won’t let it.”

Ros-Lehtinen on Monday praised her son, while criticizing the Trump administration’s proposal.

“I am so proud of my son,” said Ros-Lehtinen, referring to Heng-Lehtinen. “Your activism is an inspiration to folks all over our country to live as their true selves. Acceptance and tolerance of the transgender community speak to our shared value of individual freedom and must be recognized as such.”

“The decision taken by the Trump administration attempts to deny and erase basic human rights for our trans brothers and sisters, and making trans people invisible is just another attempt to deny their basic human dignity,” said Cruz in a press release sent to the Washington Blade.

“The laws, rules, and regulations have been put in place to provide equality for each human being,” she added. “No one can try to erase that reality. Even less can the lives of millions of trans people be erased. These are people who face discrimination and inequality every day, and still fight to achieve the respect and equal protection under the law they deserve.”

Hundreds of people gathered in New York’s Washington Square Park on Sunday to protest the proposed policy. Equality California is among the myriad groups that have also criticized the Trump administration over it.