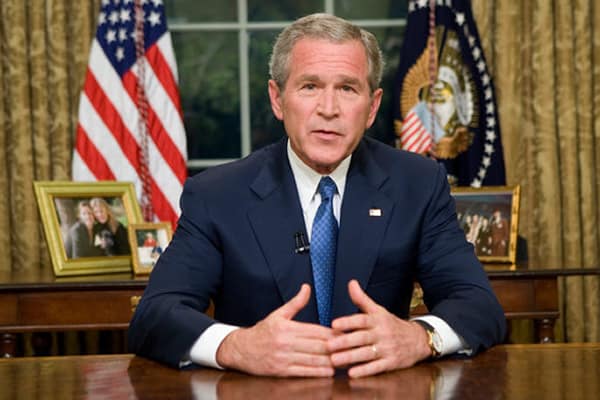 Only amnesia can explain new Democratic support for Bush

After more than a year of President Trump, the administration of George W. Bush is looking better to many Democrats in retrospect — but that might be the result of collective amnesia given the policies of the previous Republican president.

A CNN poll published late month found 61 percent of Americans now have a favorable view of Bush compared to his approval rating of 33 percent at the time he left office.

Much that support is the result of newfound favorability among Democrats. In 2009, the first year former President Obama took office, only 11 percent of Democrats approved of Bush. Now that approval rating stands at 54 percent.

The rise in support among Democrats for Bush seems to overlook that his presidency was marked by a military quagmire in Iraq, an inept response to Hurricane Katrina, a financial collapse in 2008, scheming advisers and Dick Cheney. (A recent “Saturday Night Live” spoof of Bush imitated by Will Ferrell, who impersonated the former president in the early Bush years, reminded viewers he was “like, historically bad.”)

But Bush’s administration also had an anti-gay agenda that compares, if not surpasses, the anti-LGBT policies under the Trump administration.

Forget Trump’s eight words in the State of the Union address expressing a commitment to “religious liberty,” considered code in the context of conservative politics to mean anti-LGBT discrimination. Bush, on multiple occasions, used that platform to advocate for a Federal Marriage Amendment that would have preempted the 2015 Obergefell decision and banned same-sex marriage nationwide.

“Activist judges…have begun redefining marriage by court order, without regard for the will of the people and their elected representatives,” Bush said in 2004. “On an issue of such great consequence, the people’s voice must be heard. If judges insist on forcing their arbitrary will upon the people, the only alternative left to the people would be the constitutional process. Our nation must defend the sanctity of marriage.”

(Those words so enraged Gavin Newsom, then a guest of Nancy Pelosi for Bush’s speech and mayor of San Francisco, that he decided to defy state law and begin issuing marriage licenses to same-sex couples. The California Supreme Court would later stop his efforts until marriage equality came to California years later.)

Under campaign adviser Karl Rove, the Bush re-election campaign in 2004 was centered on both the Federal Marriage Amendment and 11 state measures seeking to bar same-sex marriage. All 11 of those amendments would pass that year. Log Cabin Republicans, which endorsed Bush in 2000, refused to do so in 2004 largely over that measure.

On two separate occasions, one in 2004 and 2006, the Republican-controlled Congress would vote on the Federal Marriage Amendment to stop efforts to legalize same-sex marriage. Both times the measure failed to obtain sufficient support for passage.

Joe Solmonese, a former president of the Human Rights Campaign who led efforts to fight the measure the second time around, said the Federal Marriage Amendment was “largely driven” by Bush and Rove.

“Regardless of what people years later have told me about what was genuinely in George Bush’s heart with regard to LGBT people, that effort to write discrimination into the Constitution in a permanent way had his fingerprints on it and had his blessing,” Solmonese said.

Although strong support for the Federal Marriage Amendment was the cornerstone of anti-gay initiatives in the Bush years, the presidency was also filled with social conservatives who worked to implement an anti-gay agenda.

As a Bush appointee in the U.S. Office of Special Counsel, Scott Bloch refused to investigate claims of sexual-orientation discrimination within the federal government. Additionally, he ordered 12 OSC staffers, including the only two known gay employees, to transfer to distant cities or lose their jobs.

Monica Goodling, a Bush appointee in the Justice Department, was revealed to have violated the law for being engaged in politically motivated firings of seven U.S. attorneys in 2007. The Washington Blade later discovered under her tenure applicants for Justice Department internships and honors programs may have been rejected based on their membership in LGBT groups, such as Immigration Equality and Gay Men’s Health Crisis.

In the lame duck of the Bush administration, the Department of Health & Human Services issued a rule allowing medical practitioners to opt out of performing abortion services, which at the time was also seen as allowing practitioners to refuse service to gay people. The Obama administration rescinded the rule, but the Trump administration has recently proposed putting that back in place, raising similar concerns about denial of medical treatment to LGBT people.

There was no interest in enacting pro-LGBT changes to the law under Bush. Gay service members continued to be discharged under “Don’t Ask, Don’t Tell” under an administration and Congress that saw no need to change the law despite majority support even at that time to allow openly gay service.

In an attempt to pass hate crimes protections, the Senate approved the Matthew Shepard Act as an amendment in 2006 to major defense policy legislation, but the provision was later removed. The White House issued a Statement of Administration Policy against the standalone measure, H.R. 1592, indicating Bush might veto the defense bill over the language.

“The administration favors strong criminal penalties for violent crime, including crime based on personal characteristics, such as race, color, religion, or national origin,” the statement says. “However, the administration believes that HR 1592 is unnecessary and constitutionally questionable. If HR 1592 were presented to the president, his senior advisers would recommend that he veto the bill.”

The newfound support among Democrats for Bush, Solmonese said, is more the result of fatigue under the Trump administration as opposed to respect for the 43rd president.

“I think that the way people are feeling about George W. Bush right now has a lot more to do with Donald Trump than it does with George Bush,” Solmonese said. “It just shows you that everything is relative. You think you have it bad until you have it worse.”

As Solmonese noted, Bush has never made an effort to correct his anti-gay policies. To the surprise of many, a report emerged in the Boston Globe that he planned to officiate a same-sex marriage for a lesbian couple he knew in Maine, but his office denied that.

“If all these years later, George Bush stepped forward and said that he felt differently or he regretted or he apologized for the actions he took back then, I might feel differently,” Solmonese said.

Instead, Bush seems to have gone the opposite way. In 2016, Bush spoke by video to the World Congress of Families, which was designated a hate group by the Southern Poverty Law Center for supporting anti-gay crackdowns overseas.

But unlike Trump, who is largely silent on HIV/AIDS and has yet to appoint a White House adviser on the issue, Bush has been given credit on both sides of the aisle for an aggressive approach to the epidemic — both domestic and international.

Among the initiatives created by Bush was the President’s Emergency Plan for AIDS Relief, or PEPFAR, which seeks to provide HIV medications to countries with limited resources. (Trump sought to reduce funding for that by $1 billion, although that proposal was rejected by Congress.)

Bush also sought to repeal the travel ban that prevented foreign nationals with HIV from entering the United States. Congress repealed the ban during the Bush administration, and the policy was completely changed after a rule change in the Obama years.

In 2003, the Bush administration announced approval for widespread use of rapid HIV testing, which was new technology at the time. Previously, testing was only allowed in clinics, but the change permitted testing in mobile sites.

Carl Schmid, deputy director of the AIDS Institute, said Bush “was a leader” in many respects on HIV/AIDS, but there were challenges in his White House.

The restrictions on language, Schmid said, is comparable to the Trump administration, which has declined to explicitly identify LGBT people as high-risk groups in statements on HIV/AIDS.

The various policies on LGBT and HIV/AIDS issues in the Bush and Trump administrations have lent themselves to considerable debate on which presidency is worse for LGBT people.

Solmonese said Trump is “unquestionably” worse on LGBT issues than his Republican predecessor, citing the transgender military ban and appointment of officials like Betsy DeVos.

“Everything he says is grounded in the language of division, of us versus them,” Solmonese added. “If someone else is getting something it means that it’s being taken from you. He has consistently used dog whistle politics to send coded messages to extremists and white supremacists. That behavior doesn’t just set us back, it puts us in real danger.”

Michelangelo Signorile, a New York-based gay progressive activist and radio host on SiriusXM, declared in an essay in September that Trump as a result of his anti-LGBT policy is “the most anti-LGBTQ president in U.S. history.”

“It’s clear, both by his actions and the outcomes of them which will only increase exponentially, that Trump is already the most anti-LGBTQ president in U.S. history,” Signorile said. “That is something we must demand that political reporters, many of whom were duped in 2016 and then duped millions more, begin to focus on. It’s a fact that must be stated emphatically beginning right now.”

Given the similarities in anti-LGBT policy, could the Bush presidency afford any lessons learned to LGBT advocates in the Trump administration?

After all, gay rights supporters were able to defeat the Federal Marriage Amendment on two occasions despite strong Republican majorities in Congress. The passage of state marriage amendments could also serve as guides even though their victories, and by large margins, devastated gay couples.

Solmonese said a primary lesson should be solidarity of the LGBT movement with other groups facing oppression under the Trump administration, recalling support in the Bush years from the labor, reproductive choice and broader civil rights movement.

Schmid said being willing to work with all partners is a key lesson from the Bush years — not just media, allies and Capitol Hill, but the White House itself.

“There’s not a lot of people in the AIDS community who are comfortable working with the administration,” Schmid said. “I’m not one of those people. I work with them, but there’s not that many people that do. That’s more of a criticism of the AIDS community that they need to reach out, but there’s a need for the people to be on the outside as well and speak forcibly as well, so you need both.”