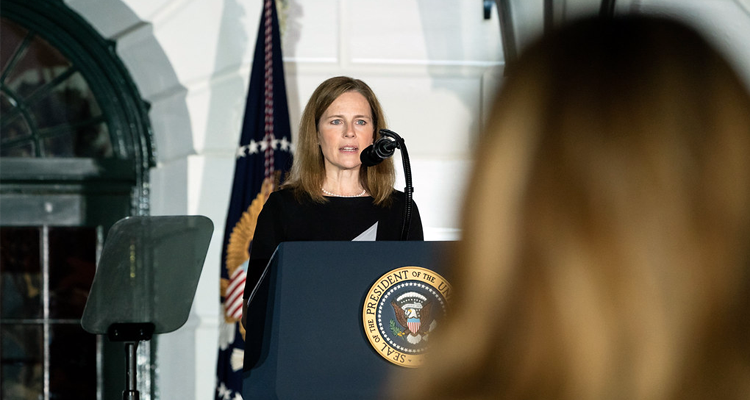 Hillary Clinton warned everyone in 2016 that if Donald Trump were elected, the Supreme Court would pass into his hands. Ceded with it, she suggested, would be Roe v. Wade, Obergefell v. Hodges and a myriad of other precedent-setting laws.

And now, here we are.

Roe is gone. Obergefell is next, if everyone from Jim Obergefell himself to President Biden to — most importantly — Justice Clarence Thomas, who wants to overturn that next, is to be believed.

Thomas also referenced the landmark 2003 case of Lawrence v. Texas, which overturned U.S. sodomy laws which had been used to penalize gay and lesbian Americans for centuries. The Supreme Court, in a decision authored by Justice Anthony Kennedy, held that “Texas law criminalizing consensual, sexual conduct between individuals of the same sex violated the Due Process Clause of the Fourteenth Amendment.”

Sodomy laws were used regularly to separate women from their children in custody cases and arrest gay men. Noted Civil Rights icon Bayard Rustin was jailed on a sodomy charge. And the Sharon Bottoms case was notorious.

Thomas, the only justice other than Stephen Breyer who was on the SCOTUS at that time, dissented in Lawrence. Along with Thomas, the late Antonin Scalia argued, presciently as it happened, that the decision would lead to acceptance of same-sex marriage.

Kennedy would author that same-sex marriage ruling in Obergefell as well.

There has been a lot of talk on social media about expanding the court, which will not happen — there aren’t even enough senators willing to pass the Voting Rights Act (which had massive bipartisan support in 1965 when it was first signed into law only to be overturned by Scalia and Thomas in 2013). President Biden has stated he is not behind such a plan. Neither is Speaker Pelosi nor even most Democratic senators.

The unremediated fact that few on the left side of the aisle are willing to acknowledge is that what was the Roberts court in 2016 — a divided but largely balanced mix of liberal, conservative and swing justices — is now the Trump court in 2022. And, like Donald Trump himself (if testimony at the latest January 6 hearing is to be believed), the Trump court is a short-sighted, out of control, tantrum-throwing, personal-vendetta-and-grievances holding, group of five right-wing extremists: Thomas, Samuel Alito, Neil Gorsuch, Brett Kavanaugh and Amy Coney Barrett.

The clique these five have solidified has taken originalism to its most extreme point.

For anyone paying attention past this explosive overturning of Roe which has riveted the country and spawned spontaneous protests nationwide, the dangers inherent in this newly emboldened conservative extremist court are manifold and reach into nearly every aspect of American life.

As always, those who will be most impacted are those in historically marginalized communities: women, Black and brown Americans, immigrants, poor people, disabled people, and LGBTQ people. Safe abortions will always be available for those with money and access. But for young and poor women, lesbians, and also trans masculine, nonbinary and gender nonconforming people with uteruses, access is limited, and risks are high.

Corrective rape of lesbians is a growing component of hate crimes. Bisexual women are frequent targets of sexual assault. And as Supreme Court expert Mark Joseph Stern wrote on Twitter June 29, “There is a reason why so many modern abortion bans have no exception for rape. The anti-abortion movement has coalesced around the idea that rape victims must be compelled to carry their rapist’s child from the moment of fertilization.”

As grim as these facts and the Roe decision are overall, there is much more than Roe being adjudicated by this rogue court. In this month’s flurry of decisions have been the vitiation of bans on concealed carry gun laws, weakening of Miranda rights against self-incrimination, and the total obliteration of the separation of Church and State in two cases, one involving a coach who was fired for coercing students to pray Christian prayers with him at every game, and another which found Maine may not exclude religious schools from a state tuition program, a violation of the Establishment Clause of the Constitution.

That last was just the latest in a series of rulings forbidding the exclusion of religious institutions from government programs. As PGN reported last June when the SCOTUS ruled in the case of Fulton v. City of Philadelphia, this has been a growing trend in the court.

Looking more closely at the Maine case, for example, shows that the schools in question had virulently anti-LGBTQ curricula. And every case in which the SCOTUS has ruled against LGBTQ people in recent years, like Masterpiece Cake Shop, has had a religious component.

These religious cases signal one of the most disturbing aspects of the rogue SCOTUS: the continual blurring of the separation of Church and State leading — as in the case of the coach, where Gorsuch’s ruling stridently stood for the coach’s rights over that of all the students — to a dominance of Christian ideology.

This does not bode well for anyone who is not Christian and certainly not for LGBTQ people who are already under assault from the GOP at the state level. Both the GOP gubernatorial and senate candidates, Doug Mastriano and Dr. Mehmet Oz, are stridently religious, anti-abortion and anti-LGBTQ. Both applauded the SCOTUS ruling on Roe, and Mastriano has pledged to make Pennsylvania’s already highly restrictive abortion law more so, with no exceptions at all.

The evolution of the Trump court — a rogue extremist court that goes against the majority of Americans’ wishes on Roe and possibly on these other cases as well — has just begun. The right to carry a gun is now more protected than the right to control one’s own uterus. The slippery slope was set in November 2016. It remains to be seen just how many rights — those which Americans thought were codified and established laws — will be upended by this court.