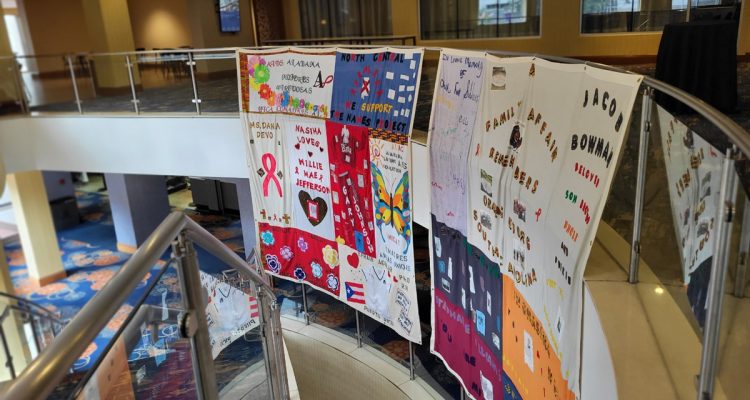 The National AIDS Memorial has joined forces with the Southern AIDS Coalition to stage a series of art exhibitions and educational forums to honor Black and Brown people in the South who have been lost to HIV/AIDS.

The initiative, titled Change the Pattern, began in Jackson, Mississippi, with curated quilt exhibitions, displays, educational forums, advocacy, storytelling, and quilt-making, according to a press release from the National AIDS Memorial. A $2.4 million grant from the biopharmaceutical company Gilead Sciences, Inc., funded Change the Pattern.

More than 500 hand-stitched quilt panels from the area were featured in what the National AIDS Memorial says is “the largest display of the AIDS Memorial Quilt ever” in Mississippi.

“By creating an empowering message and safe spaces for conversation, we can uplift, inspire and make progress toward ending the HIV epidemic, challenge cultural stigmas and continue the legacy of advocacy that the quilt represents,” said National AIDS Memorial CEO John Cunningham in the release.

Change the Pattern was announced in honor of Southern HIV/AIDS Awareness Day during the Southern AIDS Coalition’s annual Saving Ourselves Symposium that took place in August.

The conference, which was heavily attended by LGBTQ activists from the South, featured 100 quilt panels, and attendees participated in quilt-making workshops to make new quilt panels representing their loved ones.

Interested LGBTQ advocacy organizations in the South were invited to apply for funding to support local quilt-making workshops in their communities so as to ensure that the legacies of Black and Brown people are captured through newly sewn panels on the quilt through the Memorial’s Call My Name program, according to the National AIDS Memorial press release.

The application process opened on September 15 with up to 35 eligible organizations receiving as much as $5,000 to support hosting local workshops.

The first major Change the Pattern Quilt was founded 35 years ago as a visual representation of the need to end stigma and provide equitable resources to communities most impacted by HIV/AIDS, according to Southern AIDS Coalition Executive Director Dafina Ward.

“Change the Pattern is a call to action and change in the South,” said Ward. “Quilt-making has such a deep cultural connection in the Black community and in the South. The sharing and telling of these powerful stories through the quilt, coupled with advocacy and open dialogue, can help end HIV-related stigma and bring the stories of those we’ve lost to light.”

As the Change the Pattern initiative occurs, conversations about how to handle health epidemics within LGBTQ communities of color have become national topics, especially with the prevalence of monkeypox cases amongst Black gay men.

Despite earlier panic about the disease, the Centers for Diseases Control and Prevention in a report released on Wednesday said that individuals who were vaccinated against the disease were less likely to be affected over the summer compared to those who weren’t.

The effectiveness and duration of immunity after a single dose, however, is not known, and few individuals in the current outbreak have completed the recommended two-dose series, according to the report.

The most recent CDC data reports that 25,509 monkeypox cases have thus far been confirmed in the U.S. Only one death has been reported.